InterVarsity Christian Fellowship/USA (IVCF) has announced that Jeff Crosby, the current associate publisher and director of sales and marketing for InterVarsity Press, will succeed Bob Fryling as publisher for IVP and vice president for IVCF starting July 1, 2016. Fryling will retire in June after nineteen years of leading IVP. 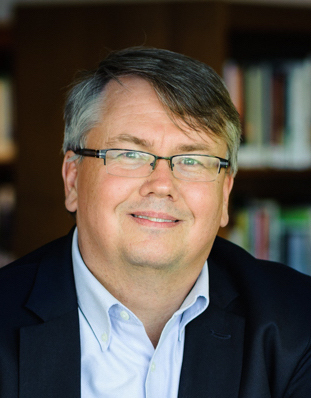 Jim Lundgren, interim president for IVCF/USA, led the search process for a publisher. He said, “In announcing Jeff’s appointment, I am filled with thankfulness for the leadership Bob Fryling has given since July of 1997. The strength of InterVarsity Press today is in large part due to Bob and to the leadership team he has assembled. Jeff will be building on a solid foundation."

Fryling and Crosby have worked alongside each other at IVP for nearly two decades, with Fryling becoming the publisher in 1997 and Crosby becoming the director of sales and marketing in 1998.

“I am excited and thankful for the selection and appointment of Jeff Crosby as the next publisher of InterVarsity Press,” Fryling said. “I have known Jeff as a wonderful and dedicated colleague for the past eighteen years at IVP. He is a strategic thinker and leader who loves books and publishing them successfully. Jeff also builds strong relationships with authors, publishing partners and co-workers. I will miss the daily opportunity of working with Jeff, but I am glad for IVP and the Christian publishing industry that Jeff will be in this role.”

Fryling has been involved with IVCF and IVP for more than fifty years, starting as a student leader at Drexel University in 1964. He was in campus ministry for twenty-seven years, including fourteen as national director of campus ministries, and has been a vice president of InterVarsity for thirty years.

Crosby got his start in the Christian book industry as the owner with his wife, Cindy, of a Logos bookstore in Bloomington, Indiana, from 1983 to 1993. He went on to become the executive director of the Association of Logos Bookstores from 1993 to 1996 and was in executive sales and marketing roles with the Christian divisions of Ingram Book Company for two years before he started at IVP.

“InterVarsity Press books challenged, stimulated and nourished my faith in Christ and my understanding of Christian theology and spirituality long before I came to work with its people in Downers Grove,” Crosby said. “It’s been a privilege to serve alongside incredibly visionary and committed colleagues for the past eighteen years as we’ve published resources for the university, the church and the world in response to God’s call on us. I’m grateful for the opportunity to step into the twin roles of IVP publisher and IVCF vice president and be a part of leading us into the next chapters of our work together.”

Crosby received his bachelor’s degree in journalism from Ball State University in 1983 and his master’s in Leadership Studies from North Central College in 2009. As IVP’s director of sales and marketing Crosby managed sales to domestic retail accounts and the international distribution partnerships in England, Australia, New Zealand, Canada, South Africa and other countries. He was instrumental in launching the direct marketing program for IVP Academic’s award-winning Ancient Christian Commentary on Scripture reference series, and was a primary drafter of IVP’s digital publishing strategy in 2008.

Throughout his career Crosby has led numerous workshops and spoken at conferences on the topics of publishing, marketing and management. In both 2015 and again this year, he has served the Evangelical Christian Publishers Association (ECPA) as the content creation leader for the sessions of its ECPA PUBu events.

Lundgren said, “Jeff brings to the publisher role vision and energy for InterVarsity Press, a track record of experience and leadership in Christian publishing and a proven ability to develop younger leaders. He is positioned to strongly lead the press into the future. It was especially encouraging throughout the search process to hear from many authors and leaders in Christian publishing as to the high regard they have for Jeff. With his appointment IVP can engage the future with a great deal of confidence.”