Why does the book of Esther, which so wonderfully illustrates the doctrine of the providence of God, never once use the name of God? And what does this strange saying in Esther 4:14 mean? The sentence contains a figure of speech known as aposiopesis--a sudden breaking off of what was being said or written so that the mind is more impressed by what is left unsaid, it being too wonderful, solemn or awful to verbalize. In English this figure is sometimes called the "sudden silence."

Taking the last problem first, it must be noted that the last clause in Esther 4:14 is usually understood to mean "Who knows whether you have not for a time like this attained royalty?" This makes very good sense, but it cannot be justified linguistically. The sentence contains an aposiopesis, since the object of "who knows" is unexpressed. It is incorrect to translate the verse with a conditional "whether . . . not" (as in the RSV, for example) rather than "but that." The omitted clause in the aposiopesis would be "what might not have been done." The resulting translation, with the suppressed clause now included, would be "Who knows what might not have been done but that you attained to royalty for such a time as this?"

"Who knows" can also be translated "perhaps." On that rendering, Mordecai would have said, "Perhaps you have attained to royalty [to the dignity of being queen] for a time like this [to use your position to deliver your people]." Thus Mordecai's speech contains an urgent appeal to Esther to use her high position to preserve her fellow Jews from destruction.

The absence of God's name from the book must also be faced. Many interpreters rightly focus on the phrase "another place" in Esther 4:14 ("if you remain silent at this time, relief and deliverance for the Jews will arise from another place"). This particular phrase is one of the most debated yet most crucial in the book of Esther.

Did Mordecai have another individual in mind? Or did he think that some other world power would arise to deliver the Jews out of this empire?

Surely the Greek "A" text, Josephus, and 1 and 2 Targums are correct in seeing in "another place" a veiled reference to God, just as the New Testament uses "kingdom of heaven" as a circumlocution for "the kingdom of God" and as 1 Maccabees 16:3 uses "mercy" as a veiled allusion to God. Often in later Talmudic literature, the word "place" (maqom) would be used in place of the name of God.

Furthermore, the fact that Esther asked the community of Jews to fast on her behalf (Esther 4:16) indicates that she and they sought divine help. Moreover, faith in the providence of God and his hand in history is illustrated throughout the book. In Esther, the wonderful works of God declare his name; there is no need to spell out that name when his hand and presence can be detected everywhere. 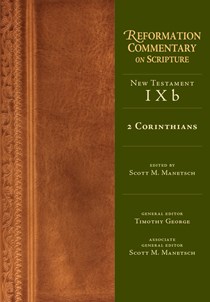 In this commentary on 2 Corinthians, Scott Manetsch guides readers through both familiar voices and lesser-known figures of the early modern period from a diversity of theological traditions, including Lutherans, Reformed, Radicals, Anglicans, and Roman Catholics. This volume will open the Reformation's resources to preachers, scholars, and all who would be newly created in Christ.