InterVarsity Press will publish Dallas Willard's final thoughts on heaven, the kingdom of God, discipleship and spiritual transformation. The book, Living in Christ’s Presence: Final Words on Heaven and the Kingdom of God, was born out of talks that Willard gave with John Ortberg at the Knowing Christ Today conference sponsored by the Dallas Willard Center for Spiritual Formation in February 2013. Willard passed away less than three months later on May 8 at the age of seventy-seven. 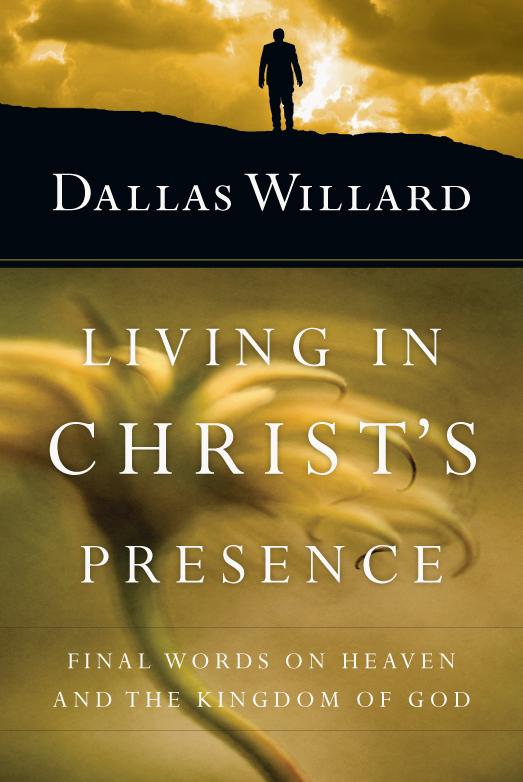 In October InterVarsity Press released a companion DVD of the conference talks. In this seven-hour, two-disc video presentation, Willard reflects on the state of the university, the meaning of knowledge, the importance of spiritual disciplines and more. Three of the sessions are taught by Ortberg, who also serves as a conversation partner with Willard after each session.

"Even when he knew he was at the end of his life Dallas Willard chose to continue doing what he had always done: teach," said Cindy Bunch, Willard's editor at InterVarsity Press and associate editorial director. "The resulting talks are poignant and Christ-centered. John Ortberg made an ideal teaching companion, presenting several of the talks. At the end of each session John moderated a wonderful dialogue with Dallas teasing out further insight and clarity from this great philosopher and humble follower of Christ."

Willard and Ortberg explore what it means to live well now in light of God's kingdom. They reflect on the power of the Trinity in our lives and what it means for us to offer a blessing to one another. Willard offers meaningful thoughts about what it will be like to transition into the very presence of Christ in heaven. He shared these words during a conversation with Ortberg on the topic of death:

"What Jesus teaches us is that within his presence and with his Word, we begin to live in heaven now, and that's why he says that those who keep his Word will never experience death, as human beings understand it. There is a continuity of life through what we view as death from this point of view, because we do see people die. Their bodies stop working, but they continue to exist as the people they are in the presence of God. I think many people do not realize they’ve died until later. Then they recognize that something is different. I love that line from John Henry Newman's old song 'Lead, Kindly Light': ‘With the morn, those angel faces smile / Which I have loved long since and lost a while.' See, that's the continuity. Really, that's the continuity of life: live now, in the action and presence of God with his people.”

Willard was an acclaimed author whose books include The Divine Conspiracy (Christianity Today’s Book of the Year in 1998), The Spirit of the Disciplines, Hearing God, Renovation of the Heart and others. Willard's most profound influence is in the area of spiritual formation and in the way he humbly mentored so many of today's leaders in the Christian faith, including  Ortberg, senior pastor at Menlo Park Presbyterian Church in Menlo Park, California, and author of many books, including God Is Closer Than You Think.

"John Ortberg was one of numerous people who were shaped by Dallas's life, writings and witness," said Jeff Crosby, InterVarsity Press associate publisher and director of sales and marketing. "Through both the book and the DVD titled Living in Christ's Presence we see their relationship in action, and we encounter their razor-sharp, wise guidance on how we, too, can be transformed and live in Christ's presence, where peace, wholeness, purpose and hope are found."

Ortberg spoke about his respect for Willard during his talk at the Knowing Christ Today conference: "Part of what's wonderful about him is the way he is far from perfect, as all of us are, and he has his own set of struggles. But you get the sense when you are with him that this is not just somebody who is in spiritual formation, but somebody who is actually living in the reality of the kingdom. It has taken over his body in ways that I want it to take over my body."