InterVarsity Press announces the publication of a prestigious new series: The Reformation Commentary on Scripture (RCS). Projected to be a twenty-eight-volume biblical commentary, the series puts the words of the Reformers directly into the hands of the contemporary church. 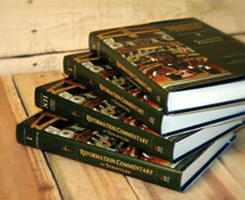 Volumes from The Reformation Commentary on Scripture set

Andy LePeau, IVP's editorial director and associate publisher, says, "The RCS will be our single largest effort in the coming decade to make resources of the past available for the renewal of the church in the present and the future."

The project brings together a team of world-class Reformation scholars under the leadership of general editor Timothy George and associate general editor Scott M. Manetsch. Each volume will feature a mix of major and minor voices from the era, with many texts appearing for the first time in English.

Following on the heels of IVP Academic's critical success with the Ancient Christian Commentary on Scripture, this new project is an important next step in a church-wide effort of retrieval. "The Reformers saw themselves as standing in fundamental continuity with the early church fathers," says Timothy George. “The RCS seeks to present the Reformers and their engagement with the Bible in the context of the ongoing history of the people of God."

The first volume, Galatians, Ephesians, is due out in October 2011 and will be edited by Gerald L. Bray, director of research at Latimer Trust.