Did God grant his gracious gifts to Abraham on the basis of works? Are we to surmise that Old Testament men and women got salvation the old-fashioned Smith-Barney way: "They earned it"?

It is the word because in Genesis 26:3-5 that causes us to raise our eyebrows and see this as a hard saying. There does appear to be a tension here between the free and unconditional offer of the promise to Abraham and the promise conditioned on Abraham's keeping all God's commands, decrees and laws. Surely law and grace are on a theological collision course.

There are five key passages that are cited as demonstrating that the patriarch Abraham performed the requirements of God and in return God offered to him the everlasting covenant as a gift for his obedience: Genesis 12:1; 17:1, 9-14; 22:16; 26:3-5. Some have added additional commands to this list, but generally these are not as directly related to the promise-plan as the five already cited.

The difficulty of this argument for conditionality and earning the promise is the stress the text makes on God's actively conferring this covenant on Abraham. In one of the most dramatic scenes in the patriarch's life, Genesis 15:12-21 depicts Abraham as being only a passive party to the formalization of the covenant, while the Lord, appearing as a "smoking firepot with a blazing torch," passes between the pieces of the animals in the act of making a covenant with Abraham. It is well worth noting that only God passed between the pieces and therefore obligated himself. Had this been a bilateral covenant in which the covenant depended equally on both parties fulfilling their sides of the bargain, then both God and Abraham would have had to move between the pieces of the animals divided in half and thus say in effect, "May it happen to me what has happened to these animals if I do not uphold my side of the covenant."

So how shall we explain the disparity that now seems to intrude, requiring obedience from Abraham if the covenant is to be maintained?

The answer will be this: promise and blessing still precede the command to obey and to keep the commands of God. Obedience is no more a condition for Abraham than it is for the church living under the command "If you obey my commands, you will remain in my love" (Jn 15:10) or "If you love me, you will obey what I command" (Jn 14:15).

The promise does not oppose God's law, either in Abraham's gift of the promise or in our gift of eternal life. The promise-giver who initiated the cove- nant with the patriarchs is the same one who gave the commandments, laws and statutes. Obedience, then, was not a condition for receiving the promise-blessing of God but was instead the evidence of real participation in that same promise. Because God was faithful, it was possible for these patriarchs to receive the promised blessings even if they themselves did not participate in them through their own belief. Even those who were not personal participants in the benefits of the covenant still had to pass on these benefits to those who followed in the line of the seed of the patriarchs. That belief was most easily demonstrated by the way in which individuals obeyed God--just as John puts it in his Gospel for the believing community of the New Testament.

Therefore, the alleged conditional elements in the Abrahamic (and Davidic) covenant never threatened the constituent elements of the promise, nor did they add any stipulations to them. The matter of duty or obedience, which indeed is intimately bound up with the promise, is a matter of outcome and sequel rather than a prior condition to being a participant in its benefits by faith.

The most remarkable text expressing the unconditional nature of the promise is Leviticus 26:44-45--"Yet in spite of this [the sins of disobedience], . . . I will not reject them or abhor them so as to destroy them completely, breaking my covenant with them. But for their sake I will remember the covenant with their ancestors." Surely that sounds as if it is indeed an unconditional covenant! 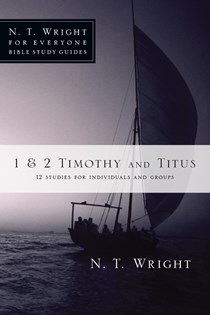 With a scholar's mind and a pastor's heart, Tom. Wright walks you through 1 and 2 Timothy Titus in this guide designed especially with everyday readers in mind. Perfect for group use or daily personal reflection, this study uses the popular inductive method combined with Wright's thoughtful insights to bring contemporary application of Scripture to life.