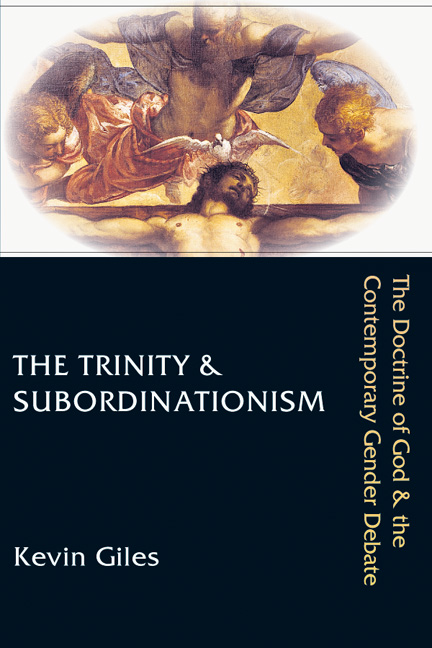 The Doctrine of God & the Contemporary Gender Debate

Subordination has been and still is a controversial subject within the church.

The concept has been vigorously debated in relation to the doctrine of the Trinity since the fourth century. Certain New Testament texts have made it part of discussions of right relations between men and women. In recent years these two matters have been dramatically brought together. Indeed, today the doctrine of the Trinity is being used to support opposing views of the right relationship between men and women in the church.

At the center of the debate is the question of whether or not the orthodox view of the trinitarian relations teach the eternal subordination of the Son of God. In this book Kevin Giles masterfully traces the historic understanding of the doctrine of the Trinity from the patristic age to our own times to help resolve this important question. But he does not stop there.

Giles goes on to provide an illuminating investigation of a closely related question--whether or not women, even in terms of function or role, were created to be permanently subordinated to men. By surveying the church's traditional interpretation of texts relating to the status of women and inquiring into the proper use of the doctrine of the Trinity, Giles lays out his position in this current debate.

"Kevin Giles does three things in this volume: (1) He shows with powerful argumentation that to speak of subordination of the Son to the Father in the trinitarian relationship is to repeat the error of Arianism. (2) Those who advocate the hierarchical-complementarian view of womanhood, as well as the supporters of the egalitarian-complementarian view, may well build a case with apparent support of some texts of Scripture, but the main current of Scripture, Giles avers, favors the latter, while the former is, unconsciously perhaps, influenced by a dominant presupposition of the inferiority of women, derived from a social context rather than from the Bible. (3) In the case of the propriety of slavery, the supporters did build a strong case on the basis of some Scripture texts, but fortunately the profound unethical nature of slavery is so evident that hardly any believer in Scripture would advocate a support of slavery in our times. This is a tightly reasoned volume with a true mastery of relevant texts and a solid argument against any subordination in the Trinity and for the biblical egalitarian-complementary view of womanhood."

"Kevin Giles, in this significant book, has simultaneously made valuable contributions to four fields of study: historical theology, hermeneutics, systematic theology and the practical life of the church. While many will not agree with him at all points, all can profit from a careful reading and interaction with his arguments."

"Kevin Giles powerfully shows how the doctrine of the Trinity has been used to justify ideologies that diminish the worth of women. Some of his allegations may be open to question, but they nevertheless merit serious consideration."

I have to first commend Giles on his breadth of research. I found many of his arguments for the egalitarian position to be extremely well reasoned and persuasive. I also found his distinction between complementarians refreshing and helpful. I can recommend this work without hesitation to anyone engaged in the gender debate.

Part 1: The Trinity Tradition: Affirmed by All but Actually Rejected by Some
1. Conservative Evangelicals Head Off on Their Own
2. The Historical Development of the Orthodox Trinitarian Tradition
3. Subordinating Tradition
4. The Retrieval Refinement of the Nicene Trinitarian Tradition in the Twentieth Century
5. Evangelicals at the End of a Very Thin Branch
Appendix A: Trintariograms
Appendix B: The 1999 Sydney Anglican Diocesan Doctrine Comission Report:
"The Doctrine of Trinity Its Bearing On the Relationship of Men and Women"

Part 2: The Woman Tradition: Reinterpreted by Some, Rejected by Others
6. Women in the Modern World In Christian Tradition
7. Women in Contemporary Hierarchical-Complementarian Literature
8. Exegesis or Eisegesis?
9. An Egalitarian-Complementarian Theological Reading of the Bible

Men and Women in the Church