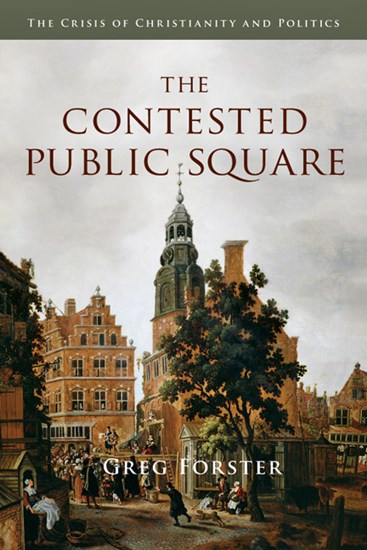 The Crisis of Christianity and Politics

Christian thinking about involvement in human government was not born (or born again!) with the latest elections or with the founding of the Moral Majority in 1979. The history of Christian political thinking goes back to the first decades of the church's existence under persecution. Building on biblical foundations, that thinking has developed over time.

This book introduces the history of Christian political thought traced out in Western culture--a culture experiencing the dissolution of a long-fought-for consensus around natural law theory. Understanding our current crisis, where there is little agreement and often opposing views about how to maintain both religious freedom and liberal democracy, requires exploring how we got where we are. Greg Forster tells that backstory with deft discernment and clear insight. He offers this retrospective not only to inform but also to point the way beyond the current impasse in the contested public square.

Illuminated by sidebars on key moments in history, major figures and questions for further consideration, this book will significantly inform Christian scholars' and students' reading and interpretation of history.

"This book is an astonishing achievement. With a mastery of the historical material and a keen appreciation of the changing forms of the problem through the centuries, Dr. Forster illuminates for Christians and others the present crisis of public virtue and just government."

"A quarter-century after Richard John Neuhaus's Naked Public Square, Greg Forster has given readers a guide in The Contested Public Square: The Crisis of Christianity and Politics. Like Neuhaus, Forster has documented the decline of natural law thinking. But beyond that declension, Forster offers an ambitious survey of the rise of Christian political thought from its inception some two millennia ago to its present 'crisis.'"

"The Contested Public Square is a comprehensive and readable history of Western political thought that gives particular attention to the influence of Christianity. A major theme is the importance of natural law for the development of ideas of religious freedom, constitutionalism and human rights. Students and teachers of political theory will be particularly interested in Professor Forster's controversial but convincing argument that Augustine, William of Ockham, Luther and Calvin were natural law thinkers."

Michael Novak, author of On Two Wings: Humble Faith and Common Sense at the American Founding

"This is a learned and lucid exploration of the origins, development and contemporary state of the political ideas of natural law, church and state, and religious toleration. To understand how the public square became what it is today, Forster's book follows the twists and turns in the triumphs and disappointments of these political ideas in Western civilization. By concentrating on certain Christian themes and thinkers in a sweeping historical analysis, Forster's The Contested Public Square provides a much-needed correction for the introductory study of Western political theory."

"Greg Forster recognizes that political philosophy is older than Christianity and independent of the Old Testament. This fact does not deny that both Testaments have something to say about politics. He has avoided the temptation of trying to explain the Christian tradition as if it began in the twentieth century, or even in the sixteenth. The very existence of revelation as its own coherent whole implies that the public square at some points should be 'contested,' even for it to be itself. In the beginning, he cites C. S. Lewis's coy devil to warn us that 'social justice' can well be our first step away from God. That step is a very current temptation that defines in large part the real 'crisis' that Forster sees in the public square. The book is well worth a careful read."

"A very readable (but not simplistic or superficial) history of Western political thought that gives particular attention to the influence of Christianity."

"As an introduction to Christian political thought, this volume succeeds admirably."

"The Contested Public Square provides a comprehensive and accessible history of Christian political thought from the first centuries of Christianity through the twentieth century. The insights gleaned from this book will be helpful in forming a frame of reference for understanding ongoing tensions surrounding religious freedom and church and state."

"A welcomed and needed addition to the growing field of intellectually responsible Christian political thought. Christians from all perspectives will find these pages full of insight. An extraordinarily rewarding read."

"The value in this work is that it dispels many of the myths that pervade the Western Church, and in particular, the Evangelical Church--myths such as the founders of America were Christian, or that the premises underlying Western culture are rooted in biblical principles. Forster provides us with a thorough exploration of the origins, development, and contemporary ideas of natural law, church and state, and religious tolerance, and also its decline in today's culture."

"The book actually benefits from hot having been written by a Catholic, for Forster does a wonderful job of showing the common provenance of ideas that tend to be felt-marked "Catholic" today. Far from being exclusively Roman, they have been the common coin of Calvinists, Lutherands, Lockeans--and of the Fathers of the American Constitution.

"Greg Forster's incredibly readable and thoughtful introduction to political philosophy brings the history of Western political thought to an educated lay readership, especially lay Christians who have not been exposed to a political history that could have resulted in less hospitable forms of governance. Forster's book is valuable reading for all Christians and conservatives, regardless of religious persuasion. I hope that many religious educators use The Contested Public Square in classes and campus ministries to educat Christians about the role their faith has played in the development of the modern world. We should be very grateful to Greg Forster for providing us an exceptionally good primer to start this intellectual journey."

". . .a fair-minded summary of the development of Christian political thought."

"Greg Forster provides a helpful introduction to at least some of the major strains of thought which shaped the way Christians approach politics. Tracing the development of these ideas through history, he gives a helpful primer for those who are interested in learning more about these issues. This is an extremely accessible book. It is written in a way that will allow someone with virtually no background in political thought to understand the ideas being discussed."

Eric, Between the Trees (wordsfromtheway.com), November 3, 2008

"Forster offers an intellectual history that is learned and accessible. . .a work that offers a whorough account of a long and complicated history."

Acknowledgments
Introduction
1. Welcome Back to Babylon
How Persecution Permanently Shaped Christian Political Ideas
2. The Wisdom of the Gods
Theology Encounters Philosophy
3. Cities of God and Man
Augustine Formalizes the Idea of Dual Citizenship
4. Natural Law
The Medieval Church Develops the Most Important Political Idea in History
5. Regio Versus Religio
The Reformation and the Nation-State
6. On the Road to Jerusalem
The Emergence of Religious Freedom
7. An Appeal to Heaven
Revolution and Liberal Democracy
8. The Fiery Trial
Christian Responses to Totalitarianism
Conclusion
Index

Greg Forster (PhD, Yale University) is the director of the Oikonomia Network and a visiting assistant professor of faith and culture at Trinity International University. He is the author of six books, including The Contested Public Square: The Crisis of Christianity and Politics and John Locke's Politics of Moral Consensus. He has also contributed to the leading scholarly journals History of Political Thought, Political Theory, Religion & Politics, Education Next and Teachers College Record, and his articles have appeared in the Washington Post, Los Angeles Times, Philadelphia Inquirer and Chronicle of Higher Education. He is also a senior fellow at the Friedman Foundation for Educational Choice.