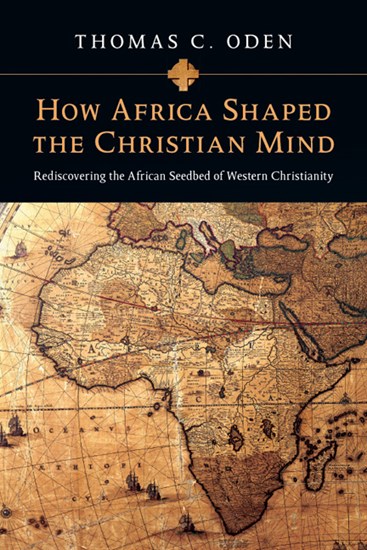 Africa has played a decisive role in the formation of Christian culture from its infancy. Some of the most decisive intellectual achievements of Christianity were explored and understood in Africa before they were in Europe.

If this is so, why is Christianity so often perceived in Africa as a Western colonial import? How can Christians in Northern and sub-Saharan Africa, indeed how can Christians throughout the world, rediscover and learn from this ancient heritage?

Theologian Thomas C. Oden offers a portrait that challenges prevailing notions of the intellectual development of Christianity from its early roots to its modern expressions. The pattern, he suggests, is not from north to south from Europe to Africa, but the other way around. He then makes an impassioned plea to uncover the hard data and study in depth the vital role that early African Christians played in developing the modern university, maturing Christian exegesis of Scripture, shaping early Christian dogma, modeling conciliar patterns of ecumenical decision-making, stimulating early monasticism, developing Neoplatonism, and refining rhetorical and dialectical skills.

He calls for a wide-ranging research project to fill out the picture he sketches. It will require, he says, a generation of disciplined investigation, combining intensive language study with a risk-taking commitment to uncover the truth in potentially unreceptive environments. Oden envisions a dedicated consortium of scholars linked by computer technology and a common commitment that will seek to shape not only the scholar's understanding but the ordinary African Christian's self-perception.

"How Africa Shaped the Christian Mind is a bold call to rehabilitate the earliest African contributions to the shaping of world Christianity. As such, it is a major resource for all people interested in the history of the Christian movement. Oden's focus on the intellectual dimension of Africans' role in the formation of Christian culture may surprise some, but it is a much-needed, welcome corrective to the assumptions held by many. In my opinion, this book is one of the most significant contributions to the literature on world Christianity. Must reading!"

"Rarely has a work of such brevity distilled so much vintage wisdom with such élan. How Africa Shaped the Christian Mind fills a crucial gap between the early church in Africa and Western Christianity, and represents a timely challenge to Christian Africans and to a post-Christian West. It will be impossible—and foolhardy—to ignore this book."

"How Africa Shaped the Christian Mind . . . is essential for all libraries East, West, South devoted to Christian historical and theological issues."

"A gripping and inspiring book."

"A helpful challenge to consider the primacy of African theology in the first centuries of the church. A very good beginning to what Oden sees as a multigenerational task."

"I found this brief book both interesting and important. I am certain that everyone needs to know and process Oden's argument."

"Oden has condensed in a small but excellent starter book a great amount of information and he has provided convincing and compelling evidence for Christianity;s debt to its African roots. He has left me with a great hunger for exploring more deeply into this vitally important subject."

"This book is a challenge, a shot across the bow of young historians. If Oden is correct, that Africa did in fact play a more decisive role in the formation of Christianity than just about everyone realizes, then the Church will profit from the investigation he calls for. This is a tremendous book and is worthy of being read by anyone who enjoys church history, or even African history. Thomas Oden has served the Church over the last few decades by editing the Ancient Christian Commentary Series and reminding us of the necessity of remembering our roots in the early church."

"Oden has offered a compelling and positively provocative work. [This] significant and timely work ought to be read by undergraduate and seminary students studying early Christianity, intercultural studies, and historical and systematic theology. It will surely be a catalyst for future generations of scholarship."

"[A] great reminder that what we are doing is recovering a great Christian past, in which the entire Christian world owes a debt to early Africans."

"While the book may be provocative to some, it is a potent reminder that Christianity is not a European religion but a worldwide religion and always has been."

"I would recommend this book to anyone interested in church history."

"Oden's book is a call to take seriously the oral and written tradition of material spoken and penned on the African continent. It is then a call to explore the past, present, and future impact of that legacy."

"Read it, be challenged, consider—and beware: for some it may lead to a life work!"

"Some of the major Church Fathers were from Africa. These Church Fathers were greatly involved in theological disputes of the time. Oden presents the case that these theologies moved from Africa to Europe and Asia. Oden proposes that present-day Africans need not create a new theology, but rediscover the theology that was born on the continent before the Arab conquests. Oden reminds Christians of the major cultural and religious centers in North Africa."

"In a little more than 200 pages, Dr. Oden documents how some of the most crucial intellectual achievements of Christianity were explored and understood in Africa long before they were in Europe. In this landmark book, Oden gives several ways Africa has shaped the Christian mind. From Africa came the idea of university, the development of Christian exegesis of scripture, the earliest intimations of ecumenical conciliar patterns, the rise of monasticism and categorization of Christian dogma."

"[A]n outline and an agenda for research . . . [by] classic forward-thinking Oden. . . . The story of Christian theology has been told from a European perspective. Oden wants to tell that story differently: classical Christian theology was heavily shaped by Africans."

Introduction
Toward a Half Billion African Christians
An Epic Story
Out of Africa
The Pivotal Place of Africa on the Ancient Map
Two Rivers: The Nile and the Medjerda--Seedbed of Early Christian Thought
Affirming Oral and Written Traditions
Self-Effacement and the Recovery of Dignity
The Missing Link: The Early African Written Intellectual Tradition Forgotten
Why Africa Has Seemed to the West to Lack Intellectual History
Interlude

Part One: The African Seedbed of Western Christianity
1 A Forgotten Story
Who Can Tell It?
Pilgrimage Sites Neglected
Under Sands: The Burial of Ancient Christian Texts and Basilicas
2 Seven Ways Africa Shaped the Christian Mind
How the Western Idea of a University Was Born in the Crucible of Africa
How Christian Exegesis of Scripture First Matured in Africa
How African Sources Shaped Early Christian Dogma
How Early Ecumenical Decision Making Followed African Conciliar Patterns
How the African Desert Gave Birth to Worldwide Monasticism
How Christian Neoplatonism Emerged in Africa
How Rhetorical and Dialectical Skills Were Honed in Africa for Europe's Use
Interlude: Harnack?s Folly
Overview
3 Defining Africa
Establishing the Indigenous Depth of Early African Christianity
The Stereotyping of Hellenism as Non-African
Scientific Inquiry into the Ethnicity of Early African Christian Writers
The Purveyors of Myopia
The African Seedbed Hypothesis Requires Textual Demonstration
A Case in Point: The Circuitous Path from Africa to Ireland to Europe and Then Back to Africa
A Caveat Against Afrocentric Exaggeration
4 One Faith, Two Africas
The Hazards of Bridge Building
The Challenge of Reconciliation of Black Africa and North Africa
The Roots of the Term Africa
Overcoming the Ingrained Lack of Awareness
Excommunicating the North
Arguing for African Unity
Defining "Early African Christianity" as a Descriptive Category of a Period of History
How African Is the Nile Valley?
5 Temptations
Tilted Historical Predispositions
The Catholic Limits of Afrocentrism
Ignoring African Sources
The Cost of the Forgetfulness
Overlooking African Voices in Scripture
How Protestants Can Celebrate the Apostolic Charisma of the Copts
The Christian Ancestry of Africa

Part Two: African Orthodox Recovery
6 The Opportunity for Retrieval
Surviving Modernity
The Steadiness of African Orthodoxy
The New African Ecumenism
Pruning Undisciplined Excesses
Burning Away the Acids of Moral Relativism
Orthodoxy: Global and African
Historic Christian Multiculturalism
Reframing Modern Ecumenics Within Classic Ecumenics
7 How the Blood of African Martyrs Became the Seed of European Christianity
Whether Classic Christian Teaching Is Defined by Power
How the History of African Martyrdom Shaped Christian Views of Universal History
Recalling the Exodus as an African Event
Amassing the Evidence
The Challenge of Young Africa
8 Right Remembering
Remembering the Scripture Rightly Through the Spirit
The Heart of African Orthodoxy
Transcending Material Worldliness
Avoiding Racial Definitions of Apostolic Truth
9 Seeking the Reconciliation of Christianity and Islam Through Historical Insight
The Risks Scholars Take
Empathizing With Sub-Saharan Suspicions of the North
Conjointly Studying the History of Islam and Christianity
The Rigorous Language Requirements of African Research
Learning from Primary Sources
A Personal Challenge

Appendix: The Challenges of Early African Research
Three Aims of Future Research
The Precedent
The Scope
The African Center of the International Consortium
The Consortium of Scholars
Assembling the Pieces of the Puzzle
Academic Leadership
Maximizing Digital Technologies
Publishing Outcomes
Conclusion

Literary Chronology of Christianity in Africa in the First Millennium
Bibliography

Find out about Tom Oden's work with the Center for Early African Christianity.