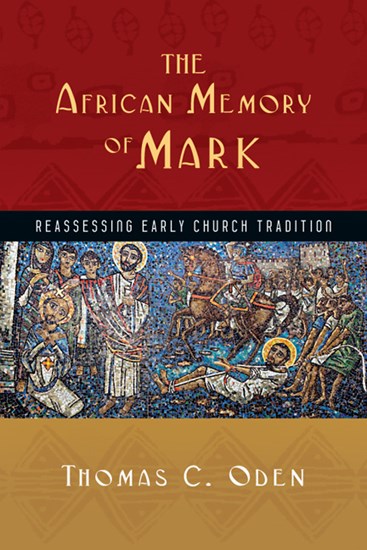 We often regard the author of the Gospel of Mark as an obscure figure about whom we know little. Many would be surprised to learn how much fuller a picture of Mark exists within widespread African tradition, tradition that holds that Mark himself was from North Africa, that he founded the church in Alexandria, that he was an eyewitness to the Last Supper and Pentecost, that he was related not only to Barnabas but to Peter as well and accompanied him on many of his travels.

In this provocative reassessment of early church tradition, Thomas C. Oden begins with the palette of New Testament evidence and adds to it the range of colors from traditional African sources, including synaxaries (compilations of short biographies of saints to be read on feast days), archaeological sites, non-Western historical documents and ancient churches.

The result is a fresh and illuminating portrait of Mark, one that is deeply rooted in African memory and seldom viewed appreciatively in the West.

"The African Memory of Mark honors the way the Coptic Church has been the faithful, preeminent carrier of the Markan tradition in the church, and does that by weaving the different genres of sources into a narrative whole. Oden is not unaware of standard depictions of Mark and the Gospel that bears his name in which the African note is rather marginal—where it is acknowledged at all—but he challenges established scholarship by marshaling the evidence and refocusing it on the continuity of the Coptic memory of Mark. Whether or not the reader agrees with the argument of the book, Oden has raised the bar of scrutiny and challenged many of the unstated assumptions of conventional scholarship. From critic and fan alike, Oden deserves credit."

"The African Memory of Mark is a timely reassessment of Mark, Gospel writer and propagator of the message of Christ to Africa. It rehabilitates a neglected tradition and deserves serious consideration by everyone who has been influenced by the historicist understanding of Mark's life and work."

"I trust that this book by Thomas Oden will remind believers that their African spiritual ancestors include Abraham, Jesus, Mark, and thousands of others. Rejoice, believers from the continent of Africa, that you have a spiritual history that dates back to creation. I trust this book will stimulate African scholars to continue research into the African memory of Mark."

"[T]his reader is grateful to Oden for retelling the theologically profound African story of Mark and opening scholars to a neglected aspect of the reception history of the Gospel of Mark."

"Oden has stumbled upon a fascinating African church tradition and has presented it in an accessible way. . . . It desires to stir a passion within the reader to expore African Christianity more and to read further."

"Anyone who enjoys learning about narratives of redemptive history across the globe will benefit from it."

"A fresh and unusual perspective on early Church history, this text will surely interest both believers and church historians alike."

"Oden has organized a fascinating collection of traditions on Mark. For any reader interested in the history of the evangelization of Africa or the life of Mark the Evangelist, this book would be a valuable resource. Oden has made a good case for the African memory of Mark and helped a new generation of Christian ministers and scholars in the Global South to find their place in early Christianity."

List of Illustrations
Abbreviations
Preface Not For Africans Alone
1 A Boy Named John Mark
Part One: The African Memory Of St. Mark
2 Defining African Memory
3 The African Roots
4 The Literary Sources of the African Memory of Mark
Part Two: The Identity of the Biblical Mark Viewed from African Tradition
5 A Portrait of Mark
6 The African Mosaic of the Lord?s Supper and Pentecost According to Mark
7 Mark with Peter and Paul
Part Three: Mark in Africa
8 The Call of Mark to Carry the Good News to Africa
9 Mark?s Martyrdom Sites in Alexandria
Part Four: Mark in the Historical Record
10 Mark?s African Identity Viewed Historically
Part Five: The Ubiquity of Mark
11The Puzzle of Mark
12 When the John Mark of History Meets the St. Mark of Memory
13 The Markan Nucleus of African Liturgy and Catechesis
Conclusion
Select Bibliography
Author Index
Subject Index
Scripture Index

Find out about Tom Oden's latest work with the Center for Early African Christianity.

Mark: The Gospel of Passion