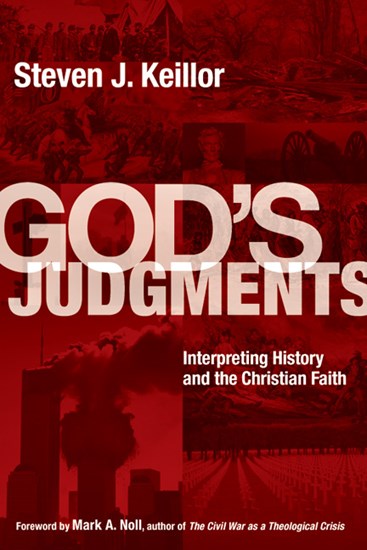 Interpreting History and the Christian Faith

What do God's judgments have to do with history?

Steven J. Keillor presents the bold thesis that divine judgment can be a fruitful category for historical investigation. In fact, he makes the case that Christianity is rightly grasped as an interpretation of history more than a worldview or philosophy. Grounding his thesis first on a study of God's judgments in the teaching of both the Old and New Testaments, Keillor then revisits two prominent events in U.S. history, the burning of Washington in 1814 and the Civil War, to further explore and test his interpretive principle of divine judgment. He concludes by suggesting the relevance of his thesis to some pressing contemporary concerns.

"The clarity of Steven Keillor's theological reasoning as well as the boldness of his historical conclusions demand very serious attention. As myself an evangelical who is partial to worldview reasoning, I am not sure he has entirely convinced me. But I know he has made me think, and think hard."

From the foreword by Mark A. Noll, Francis A. McAnaney Professor of History, University of Notre Dame

"Steven Keillor is a historian, analyzing events in all their complexity. But he is also a Christian, seeing in his Bible the principle that divine judgment is at work in particular happenings. In this thoughtful but lively book, he brings together the two approaches, drawing out uncomfortable implications for those of all political persuasions."

"Steven Keillor is developing one of the most robust and daring visions of a Christian interpretation of history, and he is doing so at a time when the meaning of American history is up for grabs. Keillor puts rebellion against God, rather than providence or covenant, at the center of history. The result is one of the most powerful theological responses to 9/11. He succeeds in the tricky task of retrieving the idea of divine judgment without catering to the political right or left. This is an original and creative theological project that will challenge anyone who has pondered the question of God's relationship to America. This book should cause quite a stir in the evangelical community."

"A book well worth reading by anyone who has pondered the meaning of history or the place of divine judgment in the affairs of principalities and powers."

"This is a provocative and stimulating book. More than that, it is a book that glorifies God. Keillor has engaged with his subject with depth and care."

"Keillor?s book is so original, so radically subversive of widespread and mostly unquestioned intellectual assumptions in the secular academy, and yet so carefully written and trenchantly argued, that it might shake up and broaden the discourse of graduate seminars in American history at our universities. It is at once a bold argument about the interpretation of major events in American history, a contribution to Christian theology as chiefly an understanding of history rather than a quasi-philosophical worldview, and a penetrating analysis of the current political, social, and cultural situation in the United States."

Steven J. Keillor (PhD, University of Minnesota) is an independent historian and was previously an assistant professor at Iowa State University. He has published several scholarly books in American history and political biography including Grand Excursion: Antebellum America Discovers the Upper Mississippi, Erik Ramstad and the Empire Builder, and This Rebellious House: American History & the Truth of Christianity. He has edited a Civil War memoir No More Gallant a Deed and written a book of essays and poems, Prisoners of Hope: Sundry Sunday Essays (Regent College Press). He writes in a log cabin in Minnesota.