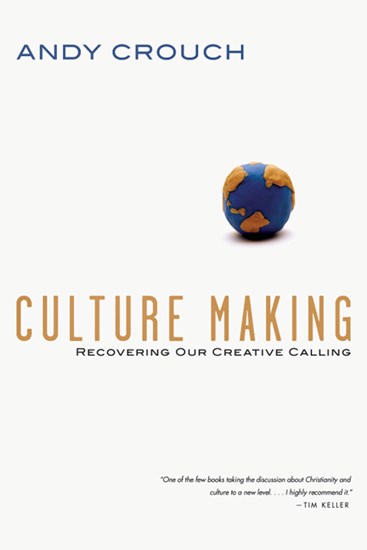 It is not enough to condemn culture. Nor is it sufficient merely to critique culture or to copy culture. Most of the time, we just consume culture. But the only way to change culture is to create culture.

Andy Crouch unleashes a stirring manifesto calling Christians to be culture makers. For too long, Christians have had an insufficient view of culture and have waged misguided "culture wars." But we must reclaim the cultural mandate to be the creative cultivators that God designed us to be. Culture is what we make of the world, both in creating cultural artifacts as well as in making sense of the world around us. By making chairs and omelets, languages and laws, we participate in the good work of culture making.

Crouch unpacks the complexities of how culture works and gives us tools for cultivating and creating culture. He navigates the dynamics of cultural change and probes the role and efficacy of our various cultural gestures and postures. Keen biblical exposition demonstrates that creating culture is central to the whole scriptural narrative, the ministry of Jesus and the call to the church. He guards against naive assumptions about "changing the world," but points us to hopeful examples from church history and contemporary society of how culture is made and shaped. Ultimately, our culture making is done in partnership with God's own making and transforming of culture.

A model of his premise, this landmark book is sure to be a rallying cry for a new generation of culturally creative Christians. Discover your calling and join the culture makers.

"Culture Making is one of the few books taking the discussion about Christianity and culture to a new level. It is a rare mix of the theoretical and the practical, its definitions are nuanced but not abstract, and it strikes all kinds of fine balances. I highly recommend it."

"Good books are either brilliant or helpful, but the best books are both--and Andy Crouch has attained that rare combination of virtues in Culture Making. As a Christian, as a parent and as an organizational leader, I would like to make a difference in the world. Crouch not only helps me understand where that yearning comes from, but how to pursue it with passion, commitment, power and spiritual health. Culture Making is a joyful gift of intelligence and practical provocation for thoughtful Christians."

"A deep and thoughtful reminder that the resurrection of Jesus empowers us to cultivate the garden, to build in the ruins of our world, and to create within and around us cultures of life."

Kelly Monroe Kullberg, author of Finding God Beyond Harvard: The Quest for Veritas, and founder and director of Project Development, The Veritas Forum

Steve Turner, writer, poet and author of Conversations with Eric Clapton, U2: Rattle and Hum and Imagine: A Vision for Christians in the Arts

"In this marvelous book Andy Crouch makes the case for cultural discipleship by giving us an exciting overview of the drama of creation, fallenness and renewal. And along the way he offers much wisdom about the very real cultural realities that we face as twenty-first-century Christians."

"This is not a good book, because it provokes and prods, incites and inspires. It takes you on an uncomfortable journey, defying the status quo and questioning accepted perspectives. It offers a fresh voice with trenchant thinking, forcing you to blow the dust off the mantle of your own settled proclivities. It resonates deeply within you, even on those points you may question. It addresses the heart of the challenge of our day. No, this is not a good book. It is a great one."

"Grappling with 'the culture' has become an obsession for contemporary Christians, but a misunderstanding of what cultures are and how they behave results in a great deal of frustration. Andy Crouch's Culture Making draws on both his broad experience and originality of insight to offer a bracing and clear-eyed view of the way forward."

"Culture Making is a book that's been needed for decades, but it arrives at just the right moment. People of faith--now poised to use their influence--have much to contribute to the common good as creators and advocates, not just as critics and judges. But that requires careful thought and clear insight, both of which are abundantly found in this profound and practical book. Andy Crouch has long had a knack for observing the culture around us and then showing us how we can make it better. With Culture Making, Crouch offers all that and more. Anyone who cares for the renewal of our culture must read this book!"

D. Michael Lindsay, author of Faith in the Halls of Power and assistant professor of sociology, Rice University

"In Culture Making, Andy Crouch has given us a vision for creativity that is not reserved for the practitioners of high art, but that reveals the dignity of the most ordinary sorts of cultural creation. It is a transformative vision that inspires to action and--in the face of the almost inevitable failures--perseverance. In the end, cultural creativity is not a gift we own, exercise and grow anxious over, but one that we receive and nurture--and through which we come to know grace."

"In this graceful, articulate volume Crouch challenges Christian common wisdom about creation and challenges as well our traditional understandings about the Revelation to John and how it articulates with the rest of Holy Writ. As refreshing as it is smart, Culture Making is a significant addition to contemporary Christian thought."

"As an artist and an advocate for artists, I am grateful for this book. Andy Crouch's edifying analysis of culture and the church and his timely call for us to be culture makers make this work invaluable in today's faith journey. This is a groundbreaking guidebook for all who are concerned about cultural issues and the church."

"Andy Crouch's Culture Making models what it argues: that a kingdom imagination that takes our richly enculturated lives seriously shows grace to be real, immanent and compelling. Surely this vocation must be central to God's call!"

Mark Labberton, pastor, First Presbyterian Church of Berkeley, and author of The Dangerous Act of Worship

"American evangelicals in the last hundred years have found it easy to condemn culture, critique culture, copy culture and consume culture. It has been much harder for them to actively and imaginatively create culture. Andy Crouch is out to change that. I confess I doubt whether they can rise to the challenge. But I am persuaded by Crouch's case that the Christian calling requires it. Here is a voice worth taking very seriously."

"Are Christians to be countercultural? Or protect ourselves from 'the culture'? Or be 'in' culture but not 'of' it? In this bracing, super-smart book, Andy Crouch changes the terms of the conversation, calling Christians to make culture. I am hard-pressed to think of something that twenty-first-century American Christians need to read more."

"This book will clarify your thinking, inspire your production, and affirm your parenting."

"Simply the best book that I've read recently. Not only is it brilliant, it's accessible. I cannot gush about this book enough. It really is that good."

"Theologically rich and practically helpful, Culture Making is a significant contribution to the discussion of Christ and culture and a useful guide for those who want to make something of the world God has created."

"Thoughtful and engaging. . . . Crouch's book does signal a hopeful development, which is that the evangelical pursuit of culture warfare was and is a dead end."

"Crouch writes as one who cares what Christians do with their time in light of God's Kingdom coming."

"Culture Making is a fresh and relevant take on how Christians should relate to the wider culture. This book will serve to make us more effective interpreters of and contributors to the cultural landscape."

"As an academic and a culture critic, I am not given to gushing over new publications. But Culture Making brought me pretty close to doing just such a non-scholarly thing! With so much coming out these days on religion and culture, one becomes a bit jaded about the possibility of something really fresh emerging. Well, this book is fresh, compelling, and engagingly written. More important, it goes deeply into its subject."

"Crouch's voice is intriguing and fresh--offering an alternative that escapes the many 'Jesus-stamped' merchandise items as an evangelical tool and implementing a fresh vision for creativity and engaging cultural lifestyles."

"Good introduction to how Christians need to do more than fatalistically talk about the dangers of the world."

"Culture Making is an enjoyable and fascinating book that helps demystify the idea of culture."

"This is a must-read book for those who are tired of talking and ready for action. The author sets the scene and tells the story of culture, then rapidly sweeps the reader into this story, finishing with a heart-stopping, imagination-grabbing challenge to go and make something of the world."

"If people tell me that something is a must-read, I tend to be a bit skeptical. That said, I was pleasantly blown-away by Crouch's book. I loved the approach of talking about 'postures' and 'gestures' toward culture. One last thing to praise was the chaste humility of the book. All to say, Culture Making probably is one of those rare must-read books that comes along every so often. A book of rare learning, helpful and accessible synthesis, and godly humility, it might actually change the evangelical culture on how to make and engage culture. If so, all I can say is thanks be to God."

"With all the books on the market about the intersection of faith and culture, you have to wonder why we need another one. The answer is simple: it's unlikely that any other book out there accomplishes what Culture Making does, and certainly not in the way that Andy Crouch does. Substantial content, beautifully expressed. Highly recommended."

"Andy Crouch, long a culture influence through film, writing, music and service, points Christians to a new, deeper understanding of their calling in culture. Readers will be profoundly impacted by this book written by one of today's top voices on the subject."

"Those who have struggled with the sacred-secular dichotomy will find this book life-giving; every Christian interested in changing culture should read it."

"Crouch works through the Bible's narrative arc to show the hand of God in the development of culture and makes the case that Christians must be producers, not just critics, of culture in order to create societal good."

Preface to the Paperback Edition
Introduction

Part 1: Culture
1. The Horizons of the Possible
2. Cultural Worlds
3. Teardowns, Technology and Change
4. Cultivation and Creation
5. Gestures and Postures 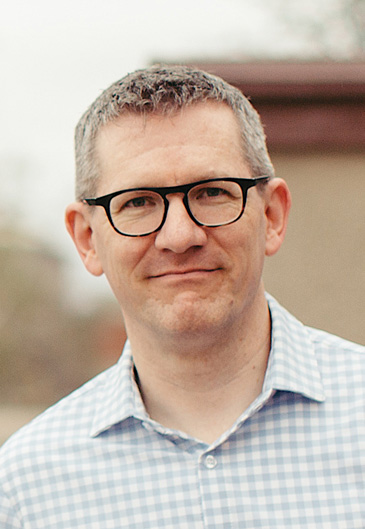 Andy Crouch (MDiv, Boston University School of Theology) is partner for theology and culture at Praxis, an organization that works as a creative engine for redemptive entrepreneurship, and he is the author of The Tech-Wise Family, Strong and Weak, Playing God, and Culture Making. Andy serves on the governing boards of Fuller Theological Seminary, the Council for Christian Colleges and Universities, and InterVarsity Christian Fellowship. For more than ten years he was an editor and producer at Christianity Today, including serving as executive editor from 2012 to 2016. He lives with his family in Pennsylvania.