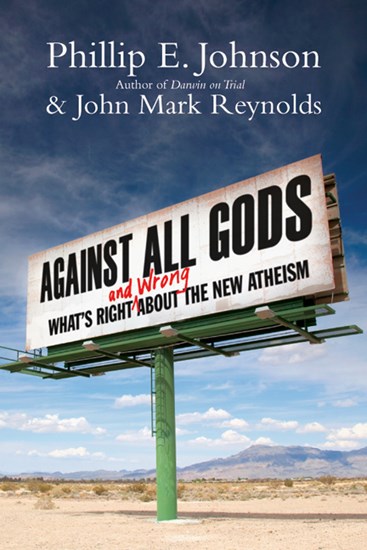 What's Right and Wrong About the New Atheism

The father of the intelligent design movement, Phillip Johnson, thinks the new atheists are right! How? They've put serious discussion about God back on the public agenda.

Despite their conclusions, folks like Richard Dawkins, Sam Harris and Daniel Dennett are asking the right questions. They're making belief in any religion an issue again, especially in the university context where, for decades, questions about faith and reason have been taken off the table for serious discussion. Open debate is exactly what we need on the topics of God, evolution and creation.

Together Johnson and John Mark Reynolds help us see the unique opportunity these vociferous and even evangelistic atheists are creating in their attempt to convert us to their unbelief. The authors show that we need not fear or react against these challenges. Rather they point to better ways to engage the opinions of this new, aggressive form of antireligious activity. With skill and insight they energetically take on the question of whether the evidence leads to a materialistic naturalism or points toward a creator God.

Be informed. Be encouraged. Join the discussion.

"What a wonderful little book. Johnson and Reynolds offer a clear, readable and intelligent critique of the new atheism. But they offer something more: joy, hope and love. You get both the reason and the romance of the Christian story. So the new atheism comes across not so much as wrong, but as one-dimensional and childish, a sort of intellectual pornography claiming to be true love. Johnson and Reynolds's complementary combination of intellectual and theological virtues is a fire that both warms and purifies."

"Rather than engaging in specific critiques of the new atheism, Phil Johnson and John Mark Reynolds add their voices to the increasing scholarly chorus that decries the real oppressor in these and related discussions: unexamined naturalistic presuppositions that reject alternative ideas without a hearing. Declaring that uncritical attitudes and a lack of appreciation for ancient writings lie behind many recent criticisms of Christianity, the authors call for open discussion of the relevant issues. This volume is a treat to read, featuring a succinct, straightforward and easily digestible text that successfully treats issue after issue."

"This superb work by Phillip E. Johnson and John Mark Reynolds is both an informed response to the new atheism and simultaneously an invitation for ongoing conversation with those who question the truth claims of the Christian faith. I have longed to have a volume like this one to share with my colleagues in the world of higher education. Against All Gods is timely, convincing, readable and accessible; it is a privilege to recommend this little book to a wide audience, with the hope that it will find its way into the hands of university students across the land."

"Johnson and Reynolds are provocateurs in the best sense of that word, and Against All Gods is sure to arouse considerable debate and reflection. This is not another apologetic response to the new atheists. It is a cultural analysis and critique of their claims. It reads like a detective novel and conveys powerful, important ideas to the reader. I couldn't put it down."

"Pastors need to consider buying this book for every young person in their church who will start college in the fall."

"For those prepared to enter the dialog, an opportunity has emerged to engage in conversation. . . Against All Gods is a concise manual to help the reader become better equipped to intelligently defend the faith."

"In railing against faith, some atheists become the very thing they speak out against. Against All Gods discusses the modern atheist movement, bringing forth a scholarly debate and how many atheists are hurting the cause arguing with weak or false information, putting religion to the stake a bit too harshly. Against All Gods is a fascinating read, and a top pick for any intrigued with the modern religious debate."

John Mark Reynolds (PhD, University of Rochester) is the provost at Houston Baptist University and the founder and director of the Torrey Honors Institute. Reynolds lectures frequently on ancient philosophy, philosophy of science, home schooling, and cultural trends.

He has taught philosophy at several colleges and universities, and he completed a two-year postdoctoral fellowship in the philosophy of science at Biola University. He regularly appears on radio talk shows, such as the Hugh Hewitt Show, and actively blogs on cultural issues at patheos.com and for the Washington Post's online column On Faith.

His books include Three Views on Creation and Evolution(Zondervan) and The Great Books Reader (Bethany House).