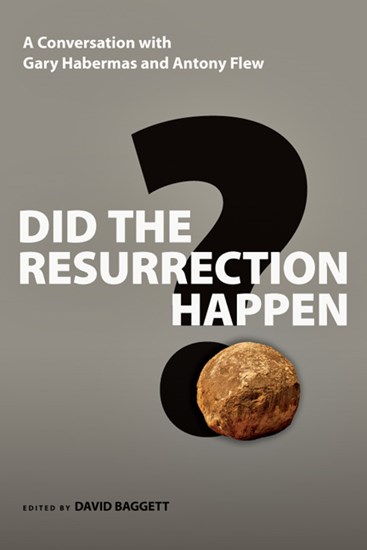 A Conversation with Gary Habermas and Antony Flew

In 2004 philosopher Antony Flew, one of the world's most prominent atheists, publicly acknowledged that he had become persuaded of the existence of God. Not long before that, in 2003, Flew and Christian philosopher Gary Habermas debated at a Veritas Forum at California Polytechnic State University, San Luis Obispo. Habermas, perhaps the world's leading expert on the historicity of the resurrection of Jesus, made the case for rational belief on the basis of the reliability of the evidence. Flew argued for alternative understandings of the evidence presented.

For two-and-a-half decades Flew and Habermas have been in friendly dialogue about the plausibility of the resurrection and the existence of God. This book presents the full content of their third and final debate, as well as transcripts of the Q A session with the audience afterward. Also included are a 2004 conversation between Habermas and Flew shortly after Flew's much-publicized change of position, as well as editor David Baggett's assessment and analysis of the full history of Habermas and Flew's interactions.

Here is your opportunity to listen in on a conversation with two of the greatest thinkers of our era about one of the most pivotal events in human history. Follow the evidence wherever it leads. And decide for yourself whether it's believable that a man could rise from the dead.

"The conversation between Habermas and Flew has been a fascinating one at the highest levels of philosophical reflection. This book beautifully chronicles that dialogue in a way that is clear for those not versed in philosophy. The book will cause you to sit and ponder. That is a compliment enough, but more than that you will learn how two competing worldviews should interact with each other--and that is a real gift."

"A lively conversation about the most important question in the history, and for the future, of the world. Habermas's compelling answers to Flew's questions awaken hope within me. The resurrection and vindication of Christ frees us from the fear of death, and for true life, now and forever. I wish this book for all of us, especially skeptics who are also thinkers."

Kelly Monroe Kullberg, author of Finding God Beyond Harvard: The Quest for Veritas, founder and director of project development, The Veritas Forum, and editor of Finding God at Harvard: Spiritual Journeys of Thinking Christians

"David Baggett has skillfully edited an engaging and warm-hearted debate between Gary Habermas and Antony Flew, two of the world's foremost philosophers and thinkers, the former a Christian and apologist and the latter a well-known atheist who recently has embraced deism. Their debate centers on the very essence of Christian faith--the resurrection of Jesus Christ. This is a great book. I recommend it enthusiastically."

"This book offers not only a lively exchange on Jesus' resurrection between Habermas and Flew. The section on Flew's pilgrimage to belief in God and the excellent analysis by Baggett help both round out the dialogue as well as provide much food for philosophical and theological thought. A superb resource on the resurrection!"

"This work brings together the chief contemporary defender of the resurrection and the foremost atheist of the 20th century. While the style is warm and conversational, this book is all meat and no fluff. Baggett's assessment of the debate alone is worth the price of the book. I highly recommend this to all who wish to defend the historical credibility of the resurrection of Jesus. The debate is a model of civility."

J. P. Moreland, Distinguished Professor of Philosophy, Talbot School of Theology, and coauthor of In Search of a Confident Faith

"This book is a dialogue between the leading expert on Jesus' resurrection and the most influential atheist philosopher of the late twentieth century. No fluff. No insults. This is an intelligent and friendly exchange of ideas among two giants in their field who have arrived at radically different views of what happened to Jesus 2,000 years ago."

"As a reader of Did the Resurrection Happen? A Conversation with Gary Habermas and Antony Flew, I experienced the rare pleasure of eavesdropping on a rigorous discussion between close friends. While they persist in their strong disagreement over a variety of substantive issues, Habermas and Flew never fail to argue with charity and humor. This posture gives the book a warm and congenial flavor. It is a great read for anyone interested in philosophy, in the resurrection or in how best to engage in significant debate."

"A useful consideration of the resurrection and also an illuminating insight into the developing thinking of an important contemporary philosopher."

"This debate will provide much food for thought in this religious debate which holds one of the most vital beliefs of Christianity in the balance. Enthusiastically recommended."

"If you want to be a witness for Jesu Christ, then I strongly, STRONGLY recommend you obtain a copy of Did the Resurrection Happen? from InterVarsity Press. The point I'm trying to make which is made in the book is that the resurrection of Christ is the foundation of our faith. Don't waste your time battling with skeptics over ancillary issues. Take them directly to the resurrection of Christ. Read this book and become a better witness than you've ever been."

"The final section of the book is, in my opinion, the best chapter of all. It is written by the editor David Bagett and looks at Flew's arguments (as well as his straw men) head on."

Lay readers could hardly ask for a better entrée to the resurreciton as a philosophical issue than Flew and Habermas' dialogues. A beacon of enlightenment on its subject.

"Lay readers could hardly ask for a better entrée to the resurrection as a philosophical issue. A beacon of enlightenment on its subject."

Part I: 2003 Resurrection Debate Between Antony Flew and Gary R. Habermas
Historical Evidence for the Crucifixion, Death, Burial and Resurrection of Jesus
Assessing the Claims of the Resurrection
Considering the Resurrection Appearances
What Counts as Evidence?
Is Belief Justifiable?
Questions from the Audience

Part II: Antony Flew's Journey to Theism
My Pilgrimage from Atheism to Theism: A Discussion Between Anthony Flew and Gary Habermas
Anthony Flew's Deism Revisited: A Review Essay on There Is a God
Gary R. Habermas

Appendix: Bayes's Theorem and the Resurrection
A Selected Bibliography
Index

The Evidence for the Resurrection