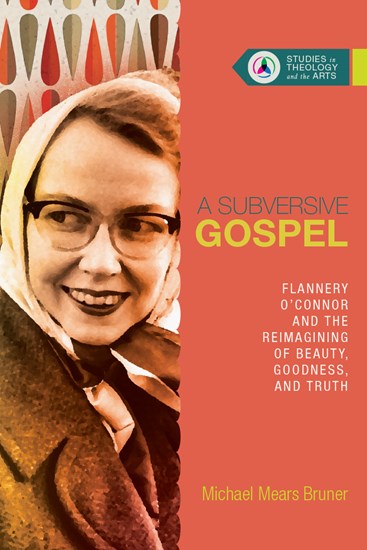 Flannery O'Connor and the Reimagining of Beauty, Goodness, and Truth

These notions were embodied in the literary work of American author Flannery O'Connor, whose writing was deeply informed by both her Southern context and her Christian faith.

In this Studies in Theology and the Arts volume, theologian Michael Bruner explores O'Connor's theological aesthetic and argues that she reveals what discipleship to Christ entails by subverting the traditional understandings of beauty, truth, and goodness through her fiction. In addition, Bruner challenges recent scholarship by exploring the little-known influence of Baron Friedrich von Hügel, a twentieth-century Roman Catholic theologian, on her work.

Bruner's study thus serves as a guide for those who enjoy reading O'Connor and—even more so—those who, like O'Connor herself, follow the subversive path of the crucified and risen one.

The Studies in Theology and the Arts  series encourages Christians to thoughtfully engage with the relationship between their faith and artistic expression, with contributions from both theologians and artists on a range of artistic media including visual art, music, poetry, literature, film, and more.

"Michael Bruner has managed to beautifully convey the strange wonder of Flannery O'Connor's fiction. Even as he locates more precisely the sources of O'Connor's theological structure, he deftly shows the deep power and beauty of her images. This could well be the spark of an O'Connor revival!"

"Michael Bruner's new book on Flannery O'Connor is as radical as its title suggests, showing that O'Connor is one of the most accomplished modern writers of Catholic theological aesthetics. Tracing this accomplishment not only to the familiar foundations of Thomism, Bruner breaks new ground in O'Connor studies by discussing in detail the influence of Friedrich von Hügel upon her work, showing how this early twentieth-century Austrian Catholic helped O'Connor understand the importance of the theological transcendentals in great art. Seeing O'Connor's work as an expression of the many subversive elements of the Christian gospel, Bruner's critical approach helps us understand how O'Connor asks us to reimagine what beauty, goodness, and truth might mean in the modern world."

"Asked to adapt Flannery O'Connor's final novel, The Violent Bear It Away, into a screenplay, Michael Bruner found that the assignment brought him closer to the beating heart of the author's fiction than he had ever felt as a literary critic. In effect rewriting The Violent Bear It Away from the inside out rather than from the outside in, Bruner came to appreciate 'her startling and sometimes pulverizing vision of things.' He felt he understood the 'theological profundity' of her fiction more fully, especially the profound care she brought to her deeply flawed, often grotesque characters. She regarded her backwoods prophets, Bruner tells us, with an 'almost primal, filial empathy as a fellow sufferer on the road to redemption.' In A Subversive Gospel, Bruner helps readers understand that O'Connor's fiction is founded upon limitations: the disease she inherited from her father, the demands of her craft, and what he calls her 'unwavering adherence to the strict delineations, even confines, of Christian dogma.' Such limitations explain, in part, why O'Connor wrote with such ferocity. Equally attuned to her penchant for tragicomedy and to her theological fluency (the Austrian theologian Friedrich von Hügel, neglected by previous scholars, looms over this account), Bruner provides a compelling reading of the redemptive quality of O'Connor's major work. As Bruner aptly describes it, 'she is performing surgery on the soul, without anesthesia.'"

"This book accomplished something I was not expecting—it caused me to love another author. It is no surprise that the author was Flannery O'Connor, who Bruner has an obvious and profound respect for. What is unexpected is the degree to which I followed him into that affection. The answers are no more black-and-white than the characters from O'Connor's novels, but the meaning to be found by walking with them becomes stitched to you, hemmed in by the very Spirit of God."

"Bruner’s witticism reminds me of a gift that my father once gave me, a luminescent cobalt rock. “It’s glass,” he explained, “created when lightning hit the sand.” The rock is something like O’Connor’s stories. Yes, her characters may be treated like dirt, and their moments of grace may cause them pain and shock. Yet O’Connor shows us something true about our nature, our suffering, and God’s grace. When struck by lightning, even dirt becomes beautiful."

"Bruner's readings of particular scenes are often powerful and convincing, his grasp of the material is profound, and . . . his total vision for O'Connor and her work is captivating and often rightly challenging. O'Connor’s fiction presents a deeply Christian challenge to the multiple complacencies of modern culture—including, or perhaps especially, Christian culture. Bruner offers a coherent and sympathetic theological reading of the subversive world O'Connor offers, a world perhaps trembling beneath the surface of our own."

The Beauty of God 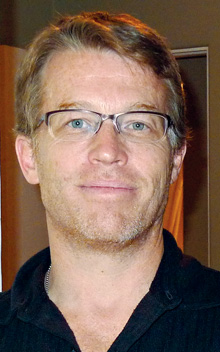 Michael Mears Bruner (PhD, Fuller Theological Seminary) is associate professor of practical theology at Azusa Pacific University. Born and raised in the Philippines as the son of missionaries, he is currently a resident scholar at the Huntington Library, an ordained minister in the PC(USA), and a recent recipient of a Lilly Endowment in theology and the arts.