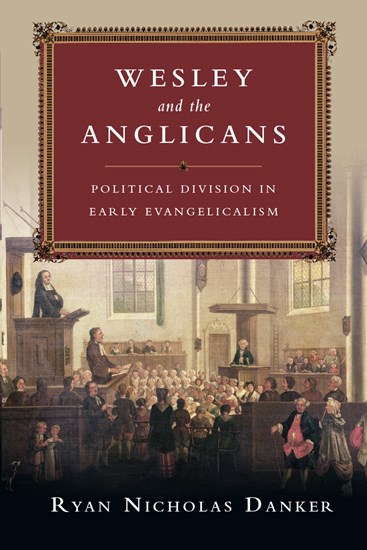 Why did the Wesleyan Methodists and the Anglican evangelicals divide during the middle of the eighteenth century?

Many would argue that the division between them was based narrowly on theological matters, especially predestination and perfection. Ryan Danker suggests, however, that politics was a major factor throughout, driving the Wesleyan Methodists and Anglican evangelicals apart.

Methodism was perceived to be linked with the radical and seditious politics of the Cromwellian period. This was a charged claim in a post-Restoration England. Likewise Danker explores the political force of resurgent Tory influence under George III, which exerted more pressure on evangelicals to prove their loyalty to the Establishment. These political realities made it hard for evangelicals in the Church of England to cooperate with Wesley and meant that all their theological debates were politically inflected.

Rich in detail, here is a book for all who seek deeper insight into a critical juncture in the development of evangelicalism and early Methodism.

"The relationship between John Wesley and the growing number of evangelical clergy within the Church of England is a subject much in need of fresh treatment. Despite the fact that it seems obvious that ecclesiastical and theological differences in eighteenth-century England need to be located in rich social and political contexts, few scholars on either side of the Atlantic seem able or equipped to write in this inclusive way. Ryan Danker is an exception. He combines theological literacy with historical sophistication and serious research with accessible prose."

"Challenging the 'standard line' that Wesley's relationship with those evangelicals who remained in the Church of England during the eighteenth century was one despoiled largely by theological considerations, that is, his Arminianism and their Calvinism, Danker has carefully weaved social, political and ecclesiastical threads to offer a far more sophisticated and ultimately convincing picture. This is a splendid book on so many levels: creatively conceived, deftly contextualized and wonderfully executed. I highly recommend it."

"This is a most welcome study, greatly advancing our understanding of the warm, yet often heated relationships between John Wesley and other evangelical clergy in the Church of England. It demonstrates that while theological factors played an important role, much more was involved in the growing divergence among the broad evangelical camp. In the process it sheds new light on continuing debates about the very nature of evangelicalism, and where (or whether) Wesleyanism may fit within that stream of the Christian community. Highly recommended!"

"Wesley and the Anglicans is an important and timely discussion of the context and content of ecclesial shifts attributed to John Wesley and the rise of Methodism. Avoiding easy discourses with familiar anecdotes pitting Wesley against Calvin, Danker does the historical work to reintroduce the pressing issues of church, society and politics in the eighteenth century. Anyone interested in discovering or rediscovering how Wesley initiated and sustained an evangelical witness, both within the church and outside it, should read this book. Maybe these echoes of Wesley's disdain for settled ministry can revitalize evangelical Christianity again."

"The last three decades have seen a revolution in scholarship on the eighteenth-century Church of England. Ryan Nicholas Danker's Wesley and the Anglicans finally places John Wesley squarely and critically within the context of the vibrant and thriving eighteenth-century Church of England that newer scholarship has described. Danker's highly nuanced historical narrative offers a fresh perspective on the Wesleyan movement—actually, on the 'John-Wesleyan' movement, since Danker is also conscious of Charles Wesley's sharply delineated variance from John Wesley's ecclesial vision. This is a must-read for serious students of the Wesleys and Methodist origins."

"From beginning to end, Danker effectively locates ecclesiastical and theological differences within their broader context in eighteenth-century England. The result is an engaging and richly detailed account of the development of evangelicalism and early Methodism. Any readers—whether Anglicans, Methodists, Calvinists, Catholics, or others—who desire to learn more about this period of history and its implications will benefit from reading Danker’s contextualized and convincingly argued book."

"This is an excellent study, and well deserves the commendations it has received from leading scholars in the field."

Acknowledgements
Abbreviations
Introduction
1. Identity and Challenge: Defining Early English Evangelicalism
2. Movement and Conversion: Wesley in the Trans-Atlantic Revival
3. Propaganda and Power: The Revival Under Fire
4. Politics and Polity: Methodist Structure and the Question of Dissent
5. Enclaves and Incursions:The Geography of Evangelicalism
6. Eucharist and Ethos: The Formation of Methodist Identity
7. Hegemony and Casualties: The Oxford Expulsions of 1768
8. Vision and Divergence: A New Anglican Historiography
9. Conclusion: Constrained to Deviate
Appendix
Bibliography
Author Index
Subject Index

Ryan Nicholas Danker (ThD, Boston University) is assistant professor of the history of Christianity and Methodist studies at Wesley Theological Seminary in Washington, D. C. He previously served as visiting assistant professor of church history and theology at Greensboro College in Greensboro, North Carolina. He has written and spoken widely on topics such as evangelicalism, John and Charles Wesley, Methodism, Wesleyan theology, the transatlantic evangelical revival and the Church of England. He has also served as a United Methodist pastor.