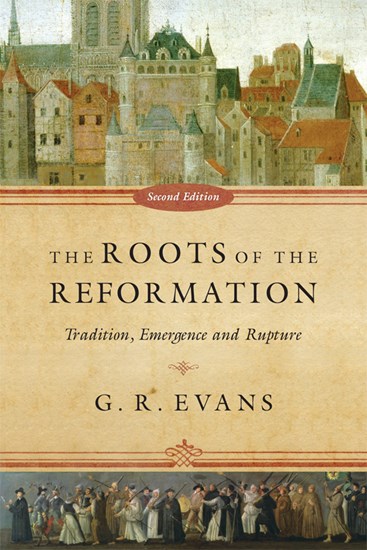 Renowned historian G. R. Evans revisits the question of what happened at the Reformation. Contravening traditional paradigms of interpretation, Evans charts the controversies and challenges that roiled the era of the Reformation and argues that these are really part of a much longer history of discussion and disputation. Evans takes up several issues, such as Scripture, ecclesiology, authority, sacraments and ecclesio-political relations, and traces the shape of the charged discussions that orbited around these through the patristic, medieval and Reformation eras. In this, she demonstrates that in many ways the Reformation was in considerable continuity with the periods that preceded it, though the consequential outcome of the debates in the sixteenth century was dramatically different.

"Briskly and breezily, but very efficiently, medievalist Gillian Evans here surveys Western Europe's changing and clashing views of Christianity from the fourteenth century through the seventeenth century. This large-scale introduction is certainly the best of its kind currently available."

"G. R. Evans is one of our finest scholars, and she has written a superb book placing the story of the Reformation in the wider context of Christian history. Comprehensive, well researched and readable."

"Far too many students have tried for too long to understand the Reformation in isolation from the long history that preceded it. Cambridge medievalist G. R. Evans has attempted to correct that unfortunate shortsightedness by placing the history of the Reformation in the larger context of its place in the unfolding story of early and medieval Christianity. Her informative book illuminates what is traditional and what is genuinely new about early Protestantism and reintroduces Protestant Christians to their own roots. Essential reading for any student of the Reformation."

"The very title of Gillian Evans's book intimates her perception of the Reformation as paradoxical--severed from the long past and yet still associated with and deeply rooted in it in such a way as to ensure its future, continuous existence in various forms. This book has the distinguishing hallmark of Evans's approach to the history of Christianity, one combining breadth of vision with deep specialist knowledge. Not only that, her writing finesse ensures that this book will enhance accessibility to a critical phase of church history that is in danger of becoming remote for the modern Christian consciousness. Furthermore, the pedagogic value of Evans's book will be appreciated with the appended 'Handlist of Reformation Concerns and Their History', plus 'Links'--an inspired innovation."

"As the introduction informs us, 'this book is written as an aid to understanding the way continuities have run through the changes of Christian history.' It is a lively and competent general survey of the chief problems and points of contention running through the history of Christian doctrine. The author, a specialist in late antiquity and the early medieval period, argues that the Reformation ought to be viewed as part of Christianity's age-old attempts to iron out these problems and smooth out the aporias. Accompanied by extensive quotations from primary sources and a handlist of chief Reformation issues in their wider context, this book will prove primarily useful as a manual for general courses in the history of Christianity. It also provides stimulating reading for more advanced scholars."

"Erudite yet accessible, The Roots of the Reformation deftly navigates the waves of constancy and disruption in the medieval and early modern eras. G. R. Evans's command of the primary source material is breathtaking in its scope. She is an outstanding teacher and a superb storyteller, taking complex abstract concepts and making them understandable, fascinating and relevant. This is a book well worth reading for its rich exploration of the key themes of the sixteenth-century Reformation."

"What really changed in the Reformation, and what remained the same? To answer this question, Evans places each major controverted issue against its background of development and dispute in the Christian West, from the first to the sixteenth century. The result is a refreshingly new and judicious assessment of the Reformation's true disjunctions and continuities."

"Evans has provided insight into that unfolding story, with the result that one is struck again by the realization that God directs the affairs of humankind in a way that does not reduce changemakers to mere puppets. . . . This book is a gem for provoking discussion."

"Evans' book is a good presentation of the Reformation through the perspective of the long-standing questions with which the church has wrestled from its beginnings. . . . I recommend it for those desiring a deeper and broader understanding of the Reformation."

"This learned, humane, and vibrant book deserves a place among your favorite church history texts."

"I know of no other book which so effectively demonstrates that the crisis of the Reformation was a crisis addressing accumulated grievances and protests which Rome had done its best to stifle. Evans' The Roots of the Reformation deserves the widest reading."

Preface
Acknowledgments
Abbreviations
1. Setting the Scene: The "Fair Field of Folk"
Part 1: Bible and Church: The Questions Begin
2. The Idea of Church
A New Idea
The Emergence of Ministers as Leaders
Local Churches and the Universal Church
3. The Idea of Faith
What Do We Believe? Trying to Put the Faith in a Nutshell
One Faith and Different Rites
4. Where Was the Bible?
Adding to the Old Testament
Creating a Standard Text of the Bible for Use in the West
The Ministry of the Word in the Early Church
Finding Many Meanings in Scripture
5. Becoming and Remaining a Member of the Church
The Doctrine of Baptism Emerges
Insiders and Outsiders: Cyprian and the Rigorist Approach to the Problem of Apostasy
6. Penance and the Recurring Problem of Sin
7. The Eucharist and the Idea of Sacraments
Eucharist
Sacraments
8. Organization, Making Decisions and Keeping Together
Councils and Other Ways of Making Decisions
The Fifteenth-Century Bid for Conciliarism Instead of Primatial Government of the Church
9. The Church and the State
The Two Swords
The Body Politic, the City, the Corporation and the Church
Titles and Benefices and the Growing Problem of the Church's Wealth
Part 2: Continuity and Change in the Middle Ages
10. Monastic Life, Monastic Education and Awakening Social Concerns
Guibert of Nogent: Monk and Social Commentator
Monasteries as Powerhouses of Education
11. The Beginning of Academic Theology and the Invention of Universities
The Invention of Universities
Bible Study and the Beginning of Academic Theology
12. The Evangelical Urge and the Wandering Preachers
Preaching Becomes Popular Again
The Formal Rhetorical Art of Preaching
The Franciscans and the Dominicans
13. Religious Experiments by the Laity
Working People, Active Orders
Exemplary Individuals and Being an Example to Others
Glimpses of Ordinary Lives: Learning What to Believe and How to Live
The Church Fosters the Mixed Life
14. Rebels, Dissidents and Repression
Social Comment and the Debate About Poverty
John Wyclif
15. Popular Preaching and the Bible in the Later Middle Ages
Wycliffites, Lollards and the English Bible
Lollard Preaching and the Bible
Part 3: Continuity and Change from the Reformation
16. Renaissance
The Rediscovery of the Greek and Hebrew Scriptures
The Biblical Languages and the Universities
Humanism or Scholasticism: The Two Ways
17. Luther and His Heirs: The Moderate Reformers
The Conversion of Martin Luther and Its Consequences
Melanchthon, Moderation and Building a Bridge Between the Academic and the Popular
Creating a Lutheran Doctrinal System
18. Henry VIII and English Lutheranism
19. Peaceful Extremists? The Anabaptist Heirs of the Waldensians
Huldreich Zwingli and the Battle with the Anabaptists
Lutheran "Good Citizens" and Anabaptist "Anarchy"
20. Calvin and His Heirs: The Puritan Reformers
John Calvin
France, Huguenots and Some Notable Women
John Knox and Scotland
The English Reformation Turns Calvinist
Puritans Leave for the New World
21. The Counter-Reformation
Responding to the Challenge: Reforming Moves in Rome
Science and the Bible from a Roman Catholic Perspective
22. Church and State Again: New Political Dimensions of the Idea of Order
23. Bible Questions Continue
Taking a Stand on the King James Version?
The Bible in Use: Private Reading and Personal Opinions
Bible Commentary in Preaching and Teaching
Polyglot Bibles
Translation Theory Moves On
Conclusion
Handlist of Reformation Concerns and Their History
Bibliography
Author Index
Subject Index
Scripture Index

G. R. Evans is professor of medieval theology and intellectual history at the University of Cambridge and was British Academy Research Reader in Theology from 1986 to 1988. She has written on a wide range of medieval authors including Augustine, Gregory the Great, Anselm, Bernard of Clairvaux and Alan of Lille. She has also written The Language and Logic of the Bible (Cambridge University Press) and Faith in the Medieval World (InterVarsity Press).