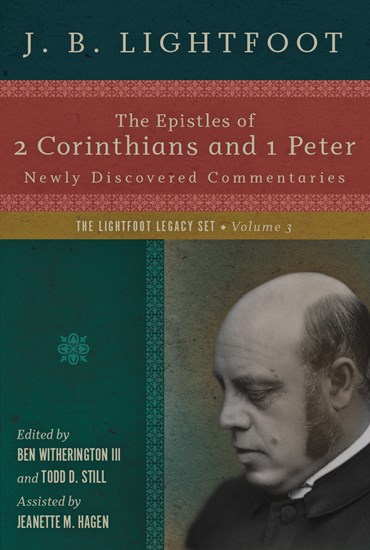 InterVarsity Press is proud to present The Lightfoot Legacy, a three-volume set of previously unpublished material from J. B. Lightfoot, one of the great biblical scholars of the modern era. In the spring of 2013, Ben Witherington III discovered hundreds of pages of biblical commentary by Lightfoot in the Durham Cathedral Library. While incomplete, these commentaries represent a goldmine for historians and biblical scholars, as well as for the many people who have found Lightfoot's work both informative and edifying, deeply learned and pastorally sensitive.

In addition to the material on the Acts of the Apostles and the Gospel of St. John, published in volumes one and two, respectively, there were fragments on 2 Corinthians and 1 Peter. Lightfoot was well known as a Pauline expert given his commentaries on Galatians, Philippians, Colossians and Philemon, and fragments of his work on Romans, 1 Corinthians, Ephesians, and 1 and 2 Thessalonians were published posthumously. It is therefore a delight to have his notes on 2 Corinthians available for the first time. Lightfoot was also interested in the life and work of Peter. The introduction to his commentary on 1 Peter provides insightful analysis of the chronology and context of the epistle. Lightfoot seeks to demonstrate that Peter knew Paul's work and that these two great apostles were in harmony regarding theology and ethics.

Now complete, these three commentary volumes reveal a scholar well ahead of his time, one of the great minds of his or any generation.

"The work of J. B. Lightfoot, along with that of his close collaborators B. F. Westcott and F. J. A. Hort, remains of landmark significance to contemporary New Testament studies. The editors and their assistants are to be thanked and congratulated for their labors in bringing to publication these previously unpublished notes on 2 Corinthians and 1 Peter, along with various essays by and about Lightfoot. These materials will be of interest to all who work on the historical interpretation of these letters and on the history of their interpretation."

"Harnack said it best: Lightfoot was a true liberal for he was 'an independent, free scholar . . . in the absolute sense of the word. He has never defended tradition for the tradition's sake.' We need more liberals like that today!"

"From Bede, the greatest European scholar of the seventh century, to today's world-class university sharing a world heritage site with a majestic cathedral, creative and careful study has long stood alongside prayer and worship here in Durham. It is therefore fitting that this amazing discovery of Lightfoot's handwritten manuscripts was made by one of the world's leading biblical scholars in the cathedral library. For within these pages, Lightfoot embodies that Durham tradition—outstanding independent scholarship offered humbly in the service of God."

"We are greatly in debt to Ben Witherington, Todd Still and their collaborators for bringing this material to light for our day."

"The discovery and publication of previously unpublished commentaries on the New Testament by Joseph Barber Lightfoot is a highly significant event in the history of New Testament scholarship. For a start, these shed valuable light on the reception of the New Testament in the nineteenth century, representing the work of the foremost English scholar of that era whose linguistic and historical skills exhibit a quality of scholarship that few today can match. . . . Ben Witherington, Todd Still and Jeanette Hagen are to be warmly congratulated for their remarkable success in making such a significant voice from the past resound again today."

"This book is significant for understanding the development of NT Scholarship in the nineteenth century. Thus, for reception-historical purposes, it is an invaluable tool."

Part One: Pauline Prolegomena: Of Chronology and Context

Part Three: Introduction to the Commentary on 1 Peter