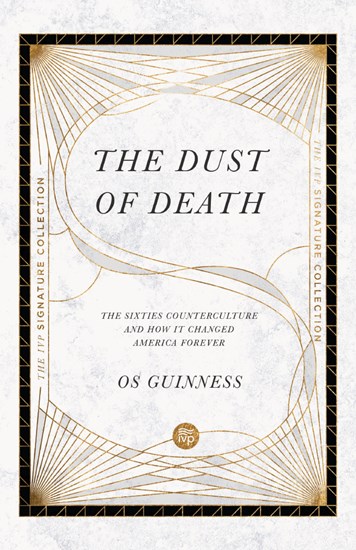 The Dust of Death

The Sixties Counterculture and How It Changed America Forever

In 1968, at the climax of the sixties, Os Guinness visited the United States for the first time. There he was struck by an impression he'd already felt in England and elsewhere: beneath all the idealism and struggle for freedom was a growing disillusionment and loss of meaning. "Underneath the efforts of a generation," he wrote, "lay dust." Even more troubling, Christians seemed uninformed about the cultural shifts and ill-equipped to respond. Guinness took on these concerns by writing his first book, The Dust of Death.

In this milestone work, leading social critic Guinness provides a wide-ranging, farsighted analysis of one of the most pivotal decades in Western history, the 1960s. He examines the twentieth-century developments of secular humanism, the technological society, and the alternatives offered by the counterculture, including radical politics, Eastern religions, and psychedelic drugs. As all of these options have increasingly failed to deliver on their promises, Guinness argues, Westerners desperately need another alternative—a Third Way. This way "holds the promise of realism without despair, involvement without frustration, hope without romanticism." It offers a stronger humanism, one with a solid basis for its ideals, combining truth and beauty. And this Third Way can be found only in the rediscovery and revival of the historic Christian faith.

First published in 1973, The Dust of Death is now back in print as part of the IVP Signature Collection, featuring a new design and new preface by the author. This classic will help readers of every generation better understand the cultural trajectory that continues to shape us and how Christians can still offer a better way.

"I read The Dust of Death as a young man and new Christian in 1977. I had been profoundly influenced by counter-cultural figures such as Aldous Huxley and Timothy Leary. Like many around my age, I was drawn to Eastern mysticism and the occult. Os Guinness helped set me straight and put it all into perspective. He got to the roots of the counter culture. He discerned its world-shaking significance and offered a sharp rational and biblical critique. The Dust of Death helped give me the intellectual confidence to critique culture and defend the Christian faith, which I have been trying to do ever since. Thank you, Dr. Guinness!"

"For decades now, Os Guinness has served readers with excellent cultural analysis that helps us to 'read our times.' I'm delighted to see one of his early works, a substantive look at the era-defining decade of the sixties, made available again, with a preface that includes some recent thoughts about the strengths and weaknesses of his earlier analysis. Os is a gift to the church, and his excellent look at the sixties, written just a few years after that momentous decade, remains relevant to conversations and movements we still encounter today."

Trevin Wax, senior vice president of theology and communications at Lifeway Christian Resources, author of This Is Our Time

"Anyone interested in the history of evangelical Christianity in the US during the turbulence of the sixties should read this thoughtful cultural analysis, which not only critiqued the establishment and the counter culture but also, since its publication fifty years ago, has shaped a generation of American evangelicals. Os Guinness stands in a line of Europeans—including Alexis de Tocqueville, G. K. Chesterton, and Frances Trollope—who have helped us see ourselves in the context of world history and cultures. Whether you find The Dust of Death prophetic or myopic, enlightening or provoking, it will most definitely make you think. It may also engender your hope for the future of the Christian faith in even our, again, very turbulent times."

Susan S. Phillips, executive director and professor of sociology and Christianity at New College Berkeley, author of The Cultivated Life

"I need not rehearse the extraordinary cultural struggles and worldview shifts that were the air I breathed coming of age and growing in Christian discipleship in the early 1970s. I can say it was agonizingly difficult experiencing how secular activists disregarded Christian faith and how the followers of Jesus seemed so unaware of the issues of the day raised by the counterculture. I would not have survived that complicated era with evangelical faith intact if it were not for The Dust of Death, which was the first solidly Christian book I ever saw that grappled so profoundly with the very concerns that plagued my life. Moreover, it was the first seriously Christian book I read that was lively and socially aware and insightful about culture—I didn't know such books even existed! I have been a bookseller for almost forty years now, and I owe much of that to Dr. Guinness and the world of reading that this book opened up for me. I commend this new edition to those of all ages and eras who want to see what wise social analysis looks like and why serious Christian books matter."

"The Dust of Death was a bolt from the blue when it was first published. . . . A fair bit of cultural history has flowed downstream since its appearance, yet on its main points—with its bold challenge to the wisdom of the modern world and its bracing appeal for Christians to live up to the name they bear—this book is even more timely than when it first appeared."

"Contrary to public opinion, the sixties have never really gone away. The main difference is that what was once countercultural has now entered the mainstream. Os Guinness's trenchant analysis of contemporary culture and his call for a Christian alternative—a Third Way based on love and truth, revival and reformation—are now more important than ever."

"To make sense of contemporary 'mainstream' America, one has to understand the countercultural revolution of the 1960s. The 'dust of death' it threw up is now settling across every aspect of American life. Os Guinness's study of that movement remains a magisterial work—nothing short of required reading for anyone seeking wisdom and understanding to cope with its challenges in this present day."

"There is nothing more important to understanding today (the summer of COVID-19 and cultural upheaval) than understanding the sixties revolution. And there is no one on the planet who could do that more thoroughly and accurately than Oz Guinness. He has done that and everyone in America needs to hear or read it."

1. The Striptease of Humanism
2. Utopia or Oblivion?
3. The Great Refusal
4. One Dimensional Man
5. Violence—Crisis or Catharsis?
6. The East, No Exit
7. The Counterfeit Infinity
8. Encircling Eyes
9. The Ultimate Trip?
10. The Third Race