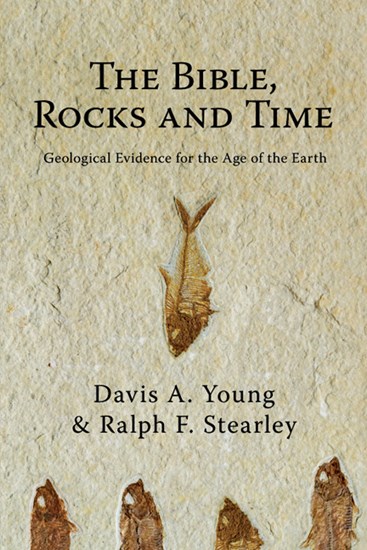 Geological Evidence for the Age of the Earth

by Davis A. Young and Ralph F. Stearley

Is the Earth relatively young or very old?

We've all heard the controversy. The consensus regarding the age of the Earth, based on the best geological evidence, is that it is billions of years old. But many Christians believe that the Bible teaches the Earth is only a few thousand years old at best. What are we to make of this discrepancy? Geologists Davis Young and Ralph Stearley tackle this issue head-on.

Thoroughly examining historical, biblical, geological and philosophical perspectives, the amply illustrated Bible, Rocks and Time takes a comprehensive and authoritative look at the key issues related to the Earth's antiquity.

"This deeply learned book by two committed Christians is the best of all proofs that science and religion properly understood are coworkers and not antagonists. It is fair-minded, it is sincere, it is informative, and above all else it is fun to read."

Michael Ruse, Lucyle T. Werkmeister Professor of Philosophy and Director of the Program in the History and Philosophy of Science, Florida State University

"The basic geology in The Bible, Rocks and Time is 'rock solid.' Despite my background of over a half-century of geologic teaching and research, I could find nothing with which to argue. The book represents a most welcome change, an authoritative and well-documented major work combining solid science and religious history to stand in sharp contrast against the vast religio-scientific literature by those with little sophistication about either or both. This book could and probably should be used as a geology text for Christian colleges, or it might well be the basic text for an innovative 'pro and con' geology course in more traditional colleges and universities."

Donald U. Wise, Professor Emeritus of Geology, University of Massachusetts--Amherst

"The Bible, Rocks and Time is a thoughtful book by Christian scientists for anyone interested in reconciling Genesis and geology. Planet Earth and life on our planet have long, complex and deeply interesting histories written in rocks and fossils that will never go away. Here professors Davis A. Young and Ralph F. Stearley lead us through a timely and constructive synthesis of religion and science."

"What an enjoyable tour of the history of geology, the interaction between geological study and biblical exegesis, and the current field of geology itself! Professors Young and Stearley have shown us why the geological evidence for the age of the Earth is persuasive. Their love for the Bible and for the world that God made, their commitment to a biblical worldview, and their patient explanations of scientific principles are exemplary, as is their respect for those Christians with whom they disagree. Thank you, Professors, for writing such a helpful book, which I will be glad to have people read."

"This book is a masterful, scholarly, engaging and readable defense of the claim that standard geology's dating of the Earth is consistent with a high view of Holy Scripture and sound Christian doctrine. Its challenge to young-Earth creationism is daunting--not only scientific but biblical, theological, philosophical and apologetical as well. It is the best book I know on this topic."

"The long-awaited return of Dave Young's Christianity and the Age of the Earth has finally come and in a wonderfully new version. Young and coauthor Ralph Stearley present us with a unique scholarly treatment of geology's relationship to a key issue of biblical interpretation. They relate well the historical engagement of theology and geoscience with comprehensive support for the establishment of Earth's great antiquity. Every church library, Christian high school and college, seminary and bookstore should have this volume available as an essential reference."

"This book will prove a useful tool for scientists to explain geologic ideas to the public, and to refute the notion that accepting science necessarily means rejecting religion. It will be especially useful in communicating with evangelical Christians."

"I am sorry that this book had to be written, but I am so glad that it was written and that it was done in such a splendid fashion."

"It is remarkable to encounter a scientific treatise written in a very interesting style. One should not be intimidated by its 500-page length. One geologist says: "Every church librarian should have this volume available as an essential reference." We agree and are pleased to have a book of this caliber in our collection."

Betty Waller, The Lamplighter, May 2009

"Saying that The Bible, Rocks and Time is probably the best book of its kind would not be saying enough, since there really is no other book of its kind: a treatment of the varied and overwhelmingly consistent evidence for the antiquity of our planet, written by Evangelical Christians with the aim of not only making the scientific case for the age of the Earth, but also helping conservative Christian readers navigate the issues of theology and Biblical interpretation that go along with such a conclusion, and all the while pointing out the difficulties and at times dishonesty of the young-earth creationist position. I highly recommend this book for any young earth creationist who is open to encountering an opposing viewpoint. I also recommend it for anyone who is unsure what to think about matters of science and creationism and wants more information. I heartily recommend this book -- all 510 pages of it!"

"This solidly researched book would be a useful reference for anyone interested in the broader issues of the historical development of geology and why geology supplanted the traditional biblical view of Earth history. While all geologists should read this book to learn more about the history of their field, it would be especially valuable for Christian school and seminary libraries as well as university libraries with history of science and religious studies departments."

"These men know what they are talking about on this subject. They have put together a nice and readable presentation of the geological evidence for the age of the earth. This book is an excellent resource for and Pastor and any Christian struggling with the issue. I recommend [parts 1 and 2] to everyone interested in the debate and how we got to the current position, especially Pastors and church leaders. Even if you don't care about the scientific details, read this."

"How old is the earth, anyway? That's a question that continues to haunt evangelicals, even in the 21st century. Suggestion: an adult Sunday school class at your church, using this book as a text. Invite professors from local colleges for some of the sessions. Yes, you will be asking people to read 500 pages. About geology. And at the end, they will agree it was time exceedingly well spent."

"This book would be especially helpful for:

"The tone is pastoral: the authors have no interest in winning a rhetorical battle. Rather, their wish is to provide a thorough assessment of the available evidence, evaluate young-Earth creationism, and encourage those who hold an Evangelical faith with a paradigm for holding the two worlds together."

Peter Enns, a time to tear down (peterennsonline.com/book-reviews/), November 2008
More

Part Three: Geological Perspectives
8. The Nature and Nurture of the Stratigraphic Record
9. Fossil Graveyards: A Rumble in the Jumble?
10. Sands Through the Hourglass: Sedimentation, Ancient Environments and Time
11. Of Time, Temperature and Turkeys: Clues from the Depths
12. Time and the Stratigraphy of the Michigan Basin: A Case Study
13. Illumination from the Range of Light: The Sierra Nevada
14. Radiometric Dating: Part One
15. Radiometric Dating: Part Two

Index of Names
Index of Subjects

Download a book excerpt from The Bible, Rocks and Time.

ABOUT Davis A. Young 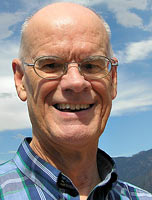 Davis A. Young (PhD, Brown University) is professor of geology emeritus of Calvin College in Grand Rapids, Michigan. His books include John Calvin and the Natural World, The Biblical Flood: A Case Study of the Church's Response to Extra-biblical Evidence, Portraits of Creation: Biblical and Scientific Perspectives on the World's Formation, and Science Held Hostage: What's Wrong with Creation Science and Evolutionism.

Ralph F. Stearley (PhD, University of Michigan) is professor of geology and chairman of the department of geology, geography, and environmental studies at Calvin College in Grand Rapids, Michigan. His current research interests include the history of paleontology and stratigraphy and Christian reactions to evolutionary thought.