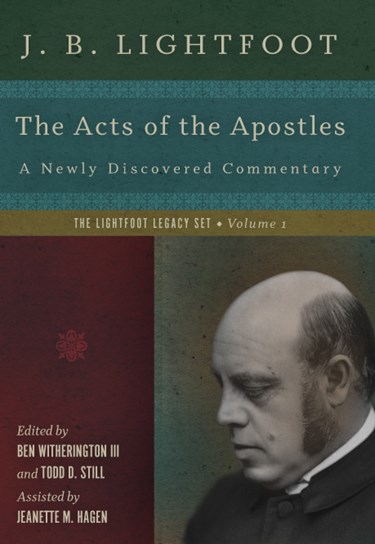 Among those many pages were two sets of lecture notes on the Acts of the Apostles. Together they amount to a richly detailed, albeit unfinished, commentary on Acts 1-21. The project of writing a commentary on Acts had long been on Lightfoot's mind, and in the 1880s he wrote an article about the book for the second British edition of William Smith's Dictionary of the Bible. Thankfully, that is not all he left behind.

Now on display for all to see, these commentary notes reveal a scholar well ahead of his time, one of the great minds of his or any generation. Well over a century later, The Acts of the Apostles remains a relevant and significant resource for the church today.

"Everyone who has read J. B. Lightfoot's great commentaries on the letters of Paul wishes for more. Thanks to Ben Witherington's diligent search and editorial labors we now have more. What could be better? We are now in possession of Lightfoot's commentary on a substantial portion of the book of Acts, which will allow us to see more clearly how the bishop of Durham understood the circumstances in which Paul's letters were written. As we would expect, Lightfoot's comments on the text of Acts are rich with pertinent parallels from Greek and Latin authors. The publication of Lightfoot's long-lost commentary is momentous."

"To have Lightfoot on Acts is astonishingly valuable, for three reasons. First, Lightfoot is peerless among biblical commentators of his day, and shows a breadth of learning and understanding which always illuminates the text he comments on. Second, Lightfoot deals in this commentary with key issues that are current today in study of Acts, such as the text, the historical value of the Acts narrative, the speeches of Acts and the portrait of Paul. Third, this book enlarges our understanding of Lightfoot's massive scholarship; he is truly a giant among New Testament scholars, and to watch him work—as in this book on Acts—is an education in the questions to ask, approaches to take and ways to draw evidence from disparate sources together to produce a coherent whole. We are greatly in debt to Ben Witherington, Todd Still and their collaborators for bringing this material to light for our day."

"When I was a seminary student, one of my professors had given a full explanation of a critical passage in Galatians when a student across the room asked aloud, 'So then, do you disagree with J. B. Lightfoot?' The professor, given to the well-timed pause, looked first to the right and then to the left and then ended the silence with the rhetorical question, 'What does a mouse say to a lion?' Lightfoot, indeed, is an exegetical lion, and this incredible discovery by Ben Witherington and now publication of fresh materials by Lightfoot will mean a whole new generation can be exposed to the stalking, roaring presence of the nineteenth century's finest exegete of the life of Paul."

"The Acts of the Apostles is a helpful addition to the library of any student of the New Testament and the early church. Pastors may also find his discussion questions and lecture style helpful as they prepare to teach and preach."

"Here is a Lightfoot feast indeed. Although long deceased, Lightfoot speaks new and afresh once again."

"Editors Witherington and Still have compiled a volume that has something for everyone. The pastor and seminarian will benefit from the articles and lectures that both precede and follow the main commentary. The scholar will thoroughly enjoy this candid look in to the personal notes of a towering figure in biblical scholarship and will find in the concise commentary a number of suggestive observations that merit further exploration. . . . We can be grateful to the editors for unearthing Lightfoot's notes, making them available in this unique volume, and acquainting us with a man whose learning and piety is an inspiration to scholar and pastor alike."

"While the commentary may not specifically address a particular passage or issue, the volume is a worthwhile addition to any scholar or pastor's Acts shelf simply because for those passages and topics Lightfoot does address, he provides not only well-reasoned, well-grounded arguments but also often offers unexpected intertextual connections that carry profound interpretive implications. . . . It would be a shame indeed to miss it, for reading Lightfoot's notes is an unprecedented opportunity to watch one of the greatest academic minds of the last century at work on a text that has held special significance for members of the Stone-Campbell Movement."

Part I: Introduction to Commenting in General

Part III: The Commentary on Acts

Ascension, Judas? Demise, the Filling Up of the Twelve (Acts 1)
Excursus: On the Historical Problem of the Varying Accounts of Judas? Demise

Pentecost and Its Aftermath (Acts 2)

The Conversion of Saul (Acts 9)

The Surprising Story of Cornelius (Acts 10)

The Apostolic Council and Its Aftermath (Acts 15)

Macedonia and On to Athens (Acts 17)
Excursus: The History of St. Paul?s Days at Thessalonike

Conclusions on the Rest of Acts

Appendix A: Lightfoot?s Article on Acts for Smith?s Dictionary of the Bible
Appendix B: Illustrations of the Acts from Recent Discoveries
Appendix C: St. Paul?s History After the Close of the Acts
Appendix D: The Obituary/Homage to Lightfoot

The Message of Acts