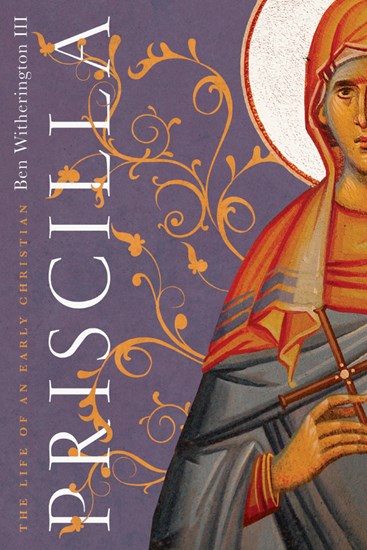 The Life of an Early Christian

Readers of the Bible may know her as the wife of Aquila, Paul's coworker, or someone who explained baptism to Apollos. Biblical references to Priscilla spark questions: Why is she mentioned before her husband? Does the mention of her instruction of Apollos mean that women taught in the church? What is her story?

Ben Witherington addresses these questions and more. In this work of historical fiction, Priscilla looks back on her long life and remembers the ways she has participated in the early church. Her journey has taken her to Ephesus, Corinth, and Rome, and she's partnered with Paul and others along the way.

"The book is an imaginative but historically sensitive sketch of the life of a significant early Christian female leader, Priscilla. Priscilla's life, however, is more than a life—it is a clear window through which Ben Witherington offers nothing less than a sketch of first-century Christianity's expansion throughout the Roman Empire—all the way to Rome. The eighty-year-old Priscilla, in a voice speaking to her adopted daughter Julia, reminisces and explores the contexts for the New Testament itself, thus Priscilla functions as an innovative approach to New Testament introduction, and photos give the book a deeper appeal."

"Women disciples like Priscilla played an enormously important but often overlooked role in the story of the spread of the Christian gospel and growth of the Christian movements throughout the first century. Witherington—a career-long contributor to the righting of this imbalance—here presents a plausible account of one of those leading women, a coworker of Paul and a teacher and matron of the early church. In the accessible form of a flowing story, he immerses us in the real-life contexts of the players of the New Testament, from the smells and sounds of the industrial districts and tenements of Rome, to the rhythms of life in a Roman villa, to the bustle of the small shops that lined Corinth's forum. Along the way, the reader is introduced to the major contours of Witherington's reconstruction of early Christian history and how the majority of the New Testament writings fit in to that history—developed and defended in his academic books, but made winsomely accessible here in narrative form. Witherington has shown himself once again the master of the ancient ideal for effective writing, communicating what is useful through what is pleasant."

David A. deSilva, professor of New Testament at Ashland Theological Seminary, author of Day of Atonement: A Novel of the Maccabean Revolt

"Ben Witherington's Priscilla: The Life of an Early Christian is an essential resource for all Christians, and especially pastors and students. Too many pastors graduate from seminary with limited knowledge of women's leadership throughout church history. Unsurprisingly, opposition to women elders, pastors, and leaders is due, in part, to this stunning ignorance of the women who built the church beside the apostle Paul. An expert historian and widely published New Testament scholar, Witherington brings to life the social and spiritual realities of biblical women like Priscilla who inspire and inform our faith today. I highly recommend Priscilla in following Hebrews 13:7, 'Remember your leaders, who spoke the word of God to you. Consider the outcome of their way of life and imitate their faith.'"

"We know much more about the lives and experiences of men in early Christianity than women. Fortunately, Ben Witherington combines his vast historical knowledge with engaging storytelling to imagine the life of Priscilla. From the glimpses of her life we catch in Paul and Acts, we can be certain she led an extraordinary life. Witherington's work of historical fiction captures that life well, all the while helping readers to explore the world of the New Testament."

Acknowledgments
1. From the Beginning
2. The Journey to Jerusalem
3. The Cost of Pentecost
4. Mad Caligula, and Persistent Aquila
5. A Marriage Arranged in Roma
6. Banished!
7. Paulus the Apostle in Corinth
8. On to Ephesus
9. Enter Apollos
10. Demons and Dark Arts in Ephesus
11. Riot in the Theater, Wild Beasts in Ephesus
12. Return to Greece
13. The Death of Claudius, the Return to Roma
14. Joanna/Junia
15. Paulus’s Farewell at Miletus
16. The Collection and Its Collectors Reach Jerusalem
17. Paulus the Prisoner in Caesarea and the Struggles of the Ekklesia in Roma
18. At Last! Paulus’s Arrival in Roma
19. House Arrest and the Captivity Epistles
20. The Release of the Apostle
21. The Conflagration
22. Peter Takes Charge and Writes of Suffering
23. Christ Followers as Roman Candles
24. Burned Out Christianoi—the Temptation to Defect
25. A Surprise Ending, and a Return to the East
26. John Mark and the Abomination That Makes Desolate
27. Titus Rules, and the Volcano Erupts
28. “You Must Increase, While We Decrease”
29. Unnerved Nerva and the End of Days
Image Credits