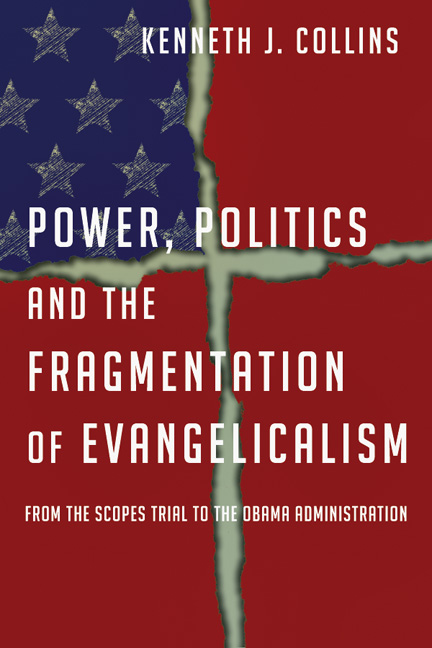 From the Scopes Trial to the Obama Administration

Kenneth J. Collins tells the narrative history of the political and cultural fortunes of American evangelicalism from the late nineteenth century through the contemporary era.

He traces the establishment of the evangelical enterprise in American culture and its influences on the political and social values of the American landscape throughout the twentieth century, as well as its fragmentation into competing ideological camps. Underlining how both sides of the liberal-conservative divide have diluted their message through political idioms, Collins suggests a way forward for evangelical political identity that avoids the pitfalls of fundamentalism and liberalism.

Will American evangelicalism outlive its partisan history? As Kenneth Collins tells the story, there is reason to think so.

"Kenneth Collins gives us a sweeping overview of the large forces that have led evangelicals, in recent decades, to become major actors in the bitter 'culture wars' that continue to bedevil American society. He makes a justly searing indictment of the principled assault by secularists on religious freedom, while giving sobering admonitions for evangelicals' often defective ways of resisting that assault."

"A major Wesleyan scholar, Kenneth Collins, has provided a significant assessment of the promise and problems of modern evangelicalism. From intelligent design to power politics, he has set forth a valuable critique of fundamentalism, neo-evangelicalism, the religious right and the evangelical left. Protestants of different traditions will find Collins a perceptive analyst of the changing dynamics within evangelicalism."

"Kenneth Collins has here issued an invitation to a scholarly forum on evangelical priorities, politics and power in culture and the public square. As at a truly good debate one is forced to think, to agree, to disagree and to admire the skill of the debaters, so it is here. As the fault lines of evangelicalism widen under the tectonic forces of power, postmodernity and personalities, Collins's reflections on teleology, the image of God and the power of the Spirit offer useful bridges to reopen communication between the estranged subcultures of contemporary evangelicalism."

"Collins writes with both the wide-ranging knowledge of a historian and the personal engagement of a Wesleyan statesman who has been actively involved in the evangelical movement throughout his career. It would be an understatement to say his provocative narrative of the movement as interpreted through the lens of its various bids for power is as refreshingly honest as it is illuminating. But more importantly, he provides sage guidance and direction for the movement as it seeks to navigate these perilous waters while remaining faithful to the gospel in the twenty-first century."

"Power, Politics and the Fragmentation of Evangelicalism is a much-needed critical analysis of evangelical engagements with public policy by a Wesleyan scholar. I strongly recommend it to readers interested in learning about the pitfalls of both the religious right and left. While the book is bound to be controversial, especially among those who advocate evangelical social action, it contains much wisdom and a prophetic warning about how the search for power corrupts religion."

"As the evangelical voting block fractures and as Billy Graham's capacious shadow fades, a rather significant question looms: Whither American evangelicalism? Perhaps for too long we've relied on political power. Collins, drawing on an insightful exploration of the twentieth century and a deft analysis of the current horizon, points us to the power of common grace and ultimately to the power of the Spirit."

Stephen J. Nichols, Ph.D., author of Jesus Made in America

"This is an important work for understanding the currents of contemporary evangelical life and the contribution that Spirit-empowered believers can make as the gospel of reconciliation is proclaimed and practiced."

Acknowledgments
Introduction
1. Cultural Shifts, the Rise of Fundamentalism and the Great Reversal
2. Fundamentalism, Neo-Evangelicalism and the Search for Power
3. Evangelicals, the Religious Right and the Moral Life of the Nation
4. Evolution, Intelligent Design and the Transformation of Culture?
5. The Resurgence of the Evangelical Left
6. Beyond Ideology: The Renewal of Catholicity and the Challenges of a Modern, Liberal Democratic State
Conclusion: What Kind of Power?
Select Bibliography
Subject Index 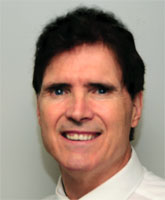