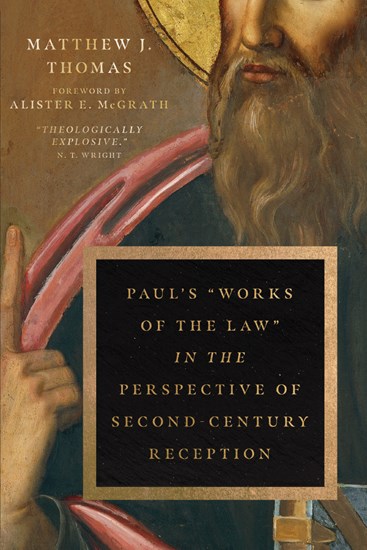 What did Paul mean by "works of the law"?

Paul writes that we are justified by faith apart from "works of the law," a disputed term that represents a fault line between "old" and "new" perspectives on Paul. Was the apostle reacting against the Jews' good works done to earn salvation, or the Mosaic law's practices that identified the Jewish people?

Matthew J. Thomas examines how Paul's second-century readers understood these points in conflict, how their readings relate to "old" and "new" perspectives, and what their collective witness suggests about the apostle's own meaning. Surprisingly, these early witnesses align closely with the "new" perspective, though their reasoning often differs from both modern viewpoints. They suggest that Paul opposes these works neither due to moralism, nor primarily for experiential or social reasons, but because the promised new law and covenant, which are transformative and universal in scope, have come in Christ.

"Dr. Thomas's work is a landmark in historical scholarship, which no interpreter of Paul should be allowed to overlook. . . . Based on Dr. Thomas's recent Oxford doctoral thesis, [it] brings readers up to date with the significant shifts in our understanding of how Paul was received and understood in the early Christian period. This major work of scholarship, happily now available in this new edition, is an invitation to rediscover what early Christian readers of Paul found in his letters. Yet it is also a powerful reminder that contemporary reflection on Paul must be informed about—and informed by—how earlier generations understood him."

"Through careful analysis of the textual data, Matthew Thomas argues persuasively that the early reception of Paul on 'works of the law' was far closer to the 'new perspective' on Paul than to the so-called old! This important book thus demonstrates again the value of reception-history and makes a genuinely fresh contribution to a long debate."

John M. G. Barclay, Lightfoot Professor of Divinity at the University of Durham

"Matthew Thomas's cogent and compelling argument moves the stalled discussion between 'old' and 'new' perspective views forward. His thorough, nuanced, and even-handed presentation illuminates second-century writings on the topic of law and works, and brings their analyses into conversation with current scholarship. If the reader's goal is to better understand Paul's thought, then Thomas's thesis deserves serious consideration."

"Matthew Thomas has done a rare thing. This book is a stellar contribution to patristic studies that, by examining the early reception of Paul in light of the 'old' and 'new' perspectives on Paul, makes an equally important—or perhaps even more important given the heat of the controversy—contribution to biblical studies. Thomas directs us to the early Fathers' view: Paul is insisting that the 'law of Christ' has replaced the Torah. As a Catholic theologian, my hope is that this stimulating book will rekindle dormant discussions among Catholic theologians about justification and the life of grace."

"Since the 'new perspective' burst onto the academic scene in the 1980s, a key phrase at the center of the ensuing debate has been Paul's 'works of the law.' A flood of studies examining the phrase in its Pauline contexts and in Jewish literature has engulfed the world of Pauline scholarship. Matthew Thomas has taken a refreshingly new approach, looking carefully at the way theologians in the first centuries of the church approached the issues about the law that are tied to the meaning of the phrase. His study finds points of continuity and discontinuity with both the 'new perspective' and the 'old perspective.' He describes accurately and fairly the views of the scholars he chooses to highlight. His study will not settle the ongoing debate about the phrase and the issues associated with it, but anyone engaged in this debate needs to take account of his work."

"What Paul meant by 'works of the law' has been hotly debated for years. When we allow the second-century writers to have their say, the balance suddenly shifts—in favor of what has been called the 'new perspective,' but should now, it seems, be called the 'original perspective.' Matthew Thomas has put us all in his debt with this detailed, patient, historically careful, and theologically explosive study."

"There are few must-reads in the field, and few works that will still be referenced fifty years from now. Thomas's work is a must-read and has potential for lasting value."

"Thomas's work on second-century interpreters is a significant contribution to reception or effective-history in general and certainly will have a transformative effect on the character of contemporary interpretation of Paul's texts."

"The dissertation is a stellar example of careful historical scholarship. M. J. Thomas has produced an even-handed account of the earliest patristic testimony on 'works of the law,' and he has done so without overstating or understating his case. The volume is clearly written, its conclusions are consistently sober, and the ancient texts are allowed to speak for themselves without undue interference from the dissertator."

"The book should be in every theological library."

"A notable work on Pauline reception in the second century, Paul and Judaism, works of the law, Jewish and Christian relationships, and patristic theologies of the old covenant and Old Testament."

"Debates on the 'old perspective' and 'new perspective' on Paul are logjammed. Or, they were. Matthew Thomas shows that the earliest interpreters do not regard 'works (of the law)' in Paul as good deeds or inappropriate moral efforts in general. The 'new perspective' on works is shown to be not new after all, but rather to recover earliest Christian teachings. This outstanding study promises to break a major impasse in Pauline theology."

Part III: Early Perspectives on Works of the Law
4. The Didache (C)
5. The Epistle of Barnabas (C)
6. Ignatius of Antioch (B)
Excursus I: Second-Century Fragments
7. The Epistle to Diognetus (B)
8. The Apology of Aristides (C)
Excursus II: The Ebionites, Marcion, and Ptolemy
9. Justin Martyr (A)
10. Melito of Sardis (B)
11. Irenaeus of Lyon (A)

Matthew J. Thomas (DPhil, University of Oxford) is assistant professor of biblical studies at the Dominican School of Philosophy and Theology in Berkeley, California, and an instructor in theology with Regent College, Vancouver.