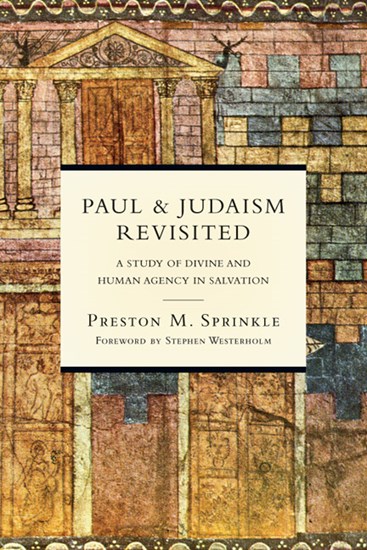 A Study of Divine and Human Agency in Salvation

Ever since E. P. Sanders published Paul and Palestinian Judaism in 1977, students of Paul have been probing, weighing and debating the similarities and dissimilarities between the understandings of salvation in Judaism and in Paul. Do they really share a common notion of divine and human agency? Or do they differ at a deep level? And if so, how? Broadly speaking, the answers have lined up on either side of the old perspective and new perspective divide. But can we move beyond this impasse?

Preston Sprinkle reviews the state of the question and then tackles the problem. Buried in the Old Testament's Deuteronomic and prophetic perspectives on divine and human agency, he finds a key that starts to turn the rusted lock on Paul's critique of Judaism. Here is a proposal that offers a new line of investigation and thinking about a crucial issue in Pauline theology.

"This is a bold and wide-ranging study of Paul and Judaism with a fresh approach. It succeeds in avoiding the false antitheses in both old and new perspectives without shying away from the difficult issues."

"Preston Sprinkle has wrestled with the New Perspective on Paul in the last few years in a disarmingly honest way. His doctoral thesis, and now this new work, are the results of such reflections. This book is an in-depth treatment of many of the New Perspective's claims as to what Second Temple Judaism really says about salvation and related topics. Although many have criticized the NPP, few have done so with a primary focus on the Jewish materials. To be sure, Sprinkle also treats judiciously the most relevant Pauline passages, but his greatest contribution is his penetrating analysis of the Jewish sources. Like Joachim Jeremias, who had several and significant disagreements with E. P. Sanders over late antique Judaism, Sprinkle offers a sustained exegesis of the relevant texts for the NPP. His presentation is clear yet carefully nuanced, forceful but not overstated. Here is a work that no one who is seriously engaged in the dialogue over Paul and Judaism can afford to overlook."

"Sprinkle has very usefully contributed to the ongoing debate about Paul's soteriology in relationship to Judaism by rooting the question in key OT traditions and stressing the importance of the tension between divine and human agency."

"Why is Paul so preoccupied with the law and related issues when his calling is simply to proclaim the Christian gospel? According to what was once a 'new' perspective on Paul, his statements have nothing to do with a prioritizing of divine over human action; rather, his concern is to resist the assumption that nonobservance of Torah debars Gentiles from the sphere of God's gracious covenant. Reading Paul alongside other Jewish texts of the Second Temple period, Preston Sprinkle shows conclusively that issues of divine and human agency cannot so easily be sidelined. They are present in Paul's text both because they are integral to his gospel and because they are deeply embedded in a scripturally shaped discourse in which he continues to participate."

"Dr. Sprinkle's study on Paul and Judaism serves to remind us not only that there are contributions still to be made but also of factors that make new contributions possible. . . . The result is fresh insight into the apostle's thought and a more balanced perspective on its relation to contemporary Jewish thinking. And so the debate moves forward. Anyone interested in its current state must carefully consider Preston Sprinkle's contribution."

"We might be tempted to think that there is nothing more to say about Paul's soteriology and that the ground has been thoroughly plowed since the new perspective. Sprinkle opens new windows by comparing the soteriology of Qumran with Paul, particularly by emphasizing Paul's distinctive slant on divine agency. Scholars and students will profit from this careful reappraisal of Paul's soteriology which is rooted in robust exegesis."

"This book models good scholarship by displaying a cautious approach. . . . This book not only offers a contribution to the ongoing discussion of the nature of Second Temple Judaism and Paul's relation to it, but it would be a good textbook for helping students understand and grapple with the arguments for and against the 'New Perspective on Paul' in its many variations."

Foreward by Stephen Westerholm
Preface
Abbreviations
1. Paul and Judaism Revisited
2. Deuteronomic and Prophetic Restoration
3. Restoration from the Curse of the Law
4. The Eschatological Spirit
5. Anthropological Pessimism in Paul and Qumran
6. Justification in Paul and Qumran
7. Judgment According to Works
8. Divine and Human Agency in Early Judaism: A Survey
9. Paul and Judaism: Soteriology Revisited
Author Index
Subject Index
Scripture Index

Preston M. Sprinkle (PhD, University of Aberdeen) is a a highly sought after speaker, teacher, and author. His many books include Erasing Hell (coauthored with Francis Chan), reached number three on the New York Times Best Sellers list.

Preston has served as a professor of theology at Cedarville University, Nottingham University, and Eternity Bible College. He also hosts a daily radio show in Boise, Idaho, and the Theology in the Raw podcast, where he responds to questions sent in by his faithful listeners.