In a career that spans thirty years, Michael Card has recorded over thirty-one albums, authored, or coauthored over twenty-four books, hosted a radio program, and written for a wide range of magazines. An award-winning musician and performing artist, he has penned such favorites as "El Shaddai," "Immanuel," and countless other songs. Expanding his ministry beyond music by authoring numerous books, he is now best known and most appreciated for the meticulous biblical study that supports the themes and lyrics of his creative compositions.

Check out Michael's Devotional Thoughts on a range of topics, and find out more about the next Biblical Imagination Conference.

In the Biblical Imagination Series, Michael invites readers to read his devotional commentary of the gospels alongside inspiring original music. With a book and music CD for each Gospel account, this set will help you discover the biblical text for yourself, recapturing your imagination with the beauty and power of Christ. 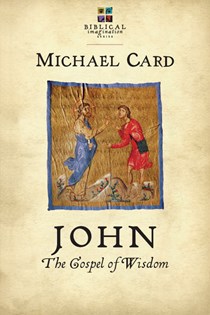 In the final book, John: The Gospel of Wisdom, Michael shows how John fills out our picture of Jesus' divine identity, with stories and sayings of Jesus not recorded by the other Gospel writers.

Read more about all four books and four CDs in the Biblical Imagination Series.

See all of Michael's Books