The late John Howard Yoder (1927-1997) was a complex, controversial figure. He is remembered for being a brilliant theologian and, in troubling contrast, for his long-term sexual misconduct toward women. InterVarsity Press condemns any such wrongdoing.

In cases like this, when deciding who and who not to publish, IVP looks for guidance to the ecclesial authority most responsible for the spiritual care of an author. In this case Yoder went through a four-year church discipline process conducted by the Indiana-Michigan Conference of the Mennonite Church between 1992 and 1997. At the end of this process, the Conference concluded by saying publicly that they encouraged "the church to use his gifts of writing and teaching." Yoder was welcomed back into fellowship at Prairie Street Mennonite Church in Elkhart, Indiana. We also appreciate the support of the Anabaptist Mennonite Biblical Seminary (AMBS), which was the institution at which Yoder taught in the 1970s and early 1980s. They have encouraged both the editors of Theology of Mission and IVP in publishing this volume.

At the time of this publication, a new effort is underway both at AMBS and in the Mennonite Church USA to understand and speak truthfully about what happened while Yoder was a part of these communities with a view to fostering healing for those who still suffer from the consequences of his actions. We support these efforts and look to their conclusion expected in 2015.

The Christian and Capital Punishment is published, Yoder’s first book of more than twenty published before his death.

The Politics of Jesus, his best-known work, is published.

Yoder's ministerial credentials are suspended by the Mennonite Church USA and he is ordered into church-supervised rehabilitation.

Yoder participates in thirty meetings over a period of four years for spiritual supervision and counseling under the authority of the Mennonite Church.

In December Yoder is welcomed back into fellowship at Prairie Street Mennonite Church in Elkhart. Yoder dies December 30, 1997.

More than ten books by Yoder are published posthumously including:

IVP signs a contract with the Institute of Mennonite Studies forTheology of Mission based on recently discovered tapes of lectures given by Yoder in the 1970s.

In August the Mennonite Church USA announces the formation of a "discernment group" to "contribute to healing for victims" of Yoder's abuse. Theology of Mission is published by IVP Academic in December.

The committee of the Mennonite Church USA formed in 2013 is expected to conclude its work.

EXCERPT FROM EDITOR'S PREFACE TO THEOLOGY OF MISSION

We recognize that John Howard Yoder is a complex, controversial figure in theological scholarship. He is remembered as a brilliant theologian who helped many to engage the Christian gospel in fresh ways. In troubling contrast, he is remembered also for his long-term sexual harassment of women.

We recognize the tensions involved in presenting the past work of someone who so passionately called Christians to reconciling lives and yet used his position of power to abuse others. At the time of this publication, a new effort is underway in Yoder's ecclesial and teaching institutions to understand and speak truthfully about what happened while he was a part of these communities with a view to bringing healing to those who still suffer from the consequences of his actions.

It is our hope that those in the academy and others studying Yoder's work will not dismiss the complexity of these issues but continue to evaluate, appropriate and criticize Yoder's work in the full context of his scholarly, ecclesial and personal legacy.

In this project we have tried to honestly and faithfully preserve the various nuances of Yoder's perspective on Christian mission hoping that, as he might have said, it will point readers beyond himself toward the astonishing, reconciling mission of God through Jesus Christ. 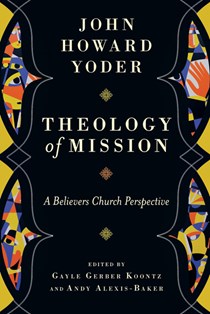 John Howard Yoder, author of The Politics of Jesus (1972), was best known for his writing and teaching on Christian pacifism. He taught at Associated Mennonite Biblical Seminaries and the University of Notre Dame.

This volume—based on lectures recorded in 1973—shows he was a profound missiologist as well. Working from a free church perspective, Yoder weaves together biblical, theological, practical and interreligious reflections to think about mission beyond Christendom.