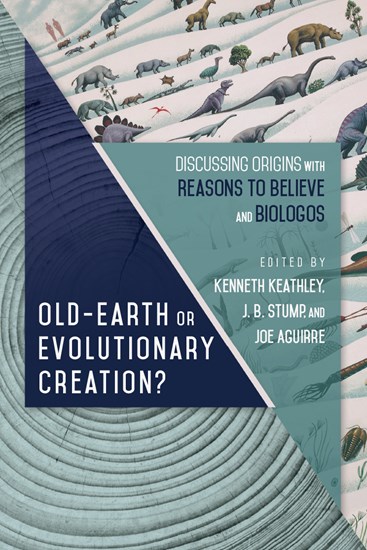 Discussing Origins with Reasons to Believe and BioLogos

Edited by Kenneth Keathley, J. B. Stump, and Joe Aguirre

Christians confess that God created the heavens and the earth. But they are divided over how God created and whether the Bible gives us a scientifically accurate account of the process of creation.

Representatives of two prominent positions—old-earth creation (Reasons to Believe) and evolutionary creation (BioLogos)—have been in dialogue over the past decade to understand where they agree and disagree on key issues in science and theology. This book is the result of those meetings.

Moderated by Southern Baptist seminary professors, the discussion between Reasons to Believe and BioLogos touches on many of the pressing debates in science and faith, including biblical authority, the historicity of Adam and Eve, human genetics and common descent, the problem of natural evil, and methodological naturalism. While both organizations agree that God created the universe billions of years ago, their differences reveal that far more is at stake here than just the age of the earth.

Old-Earth or Evolutionary Creation? invites readers to listen in as Christian scholars weigh the evidence, explore the options, and challenge each other on the questions of creation and evolution. In a culture of increasing polarization, this is a model for charitable Christian dialogue.

"Old-Earth or Evolutionary Creation?, edited by Kenneth Keathley, J. B. Stump, and Joe Aguirre, is the result of an 'unprecedented project' that brings together 'three groups who disagree about key points of science and theology but share a love for Jesus.' The book is particularly successful because of the world-class minds who deliver a refreshingly objective and scholarly overview of science and faith issues that have been so divisive in the church and the academy. The essays and interviews clearly communicate theological and scientific points of divergence and coherence while providing a relevant and carefully researched resource for anyone interested in the study of origins. As a university president and a person of orthodox Christian belief, I see this publication as a significant step forward for both the faith community and the academy."

"Origins, particularly human origins, continues to be a controversial issue among evangelical Protestants. In Old-Earth or Evolutionary Creation?, the organizations BioLogos and Reasons to Believe model a respectful interchange of ideas in spite of their significant differences. The result is an intelligent and illuminating discussion of this crucial and timely topic."

"This book has cultural significance that extends far beyond the origins debate. Here, Christians with deep disagreements chose to worship together, laboring for several years to understand and love each other. In a society marked by angry divisions, the hard work of reconciliation chronicled in this book is rare, beautiful, and an example for us all to follow."

"Given the vastness of the literature and the breadth of scientific and theological background necessary to understand the arguments, it is perhaps inevitable that Christians sometimes misconstrue how other believers reconcile science and faith. In her conclusion to this book, Debora Haarsma effectively summarizes its uniqueness: 'Participants asked questions out of a genuine desire to learn the views of others, not to trip them up. People stated their disagreements clearly, but without animosity and grandstanding.' With Southern Baptist seminary professors (young-earth creation) acting as moderators and audience, representatives of Reasons to Believe (old-earth creation) and BioLogos (evolutionary creation) cordially discuss why they think their models are both scientifically valid and compatible with conservative Christian theology. The book addresses many important issues, including inerrancy, the image of God, Adam and Eve, the question of evil, the age of the earth, and common descent, with a number of well-known authors, both scientists and theologians, each addressing their specialties. This book is valuable, not for its contribution to knowledge, as all the ideas have been published elsewhere, but for its contribution to understanding, providing an example of constructive dialogue on the vital issue of how we relate to the rest of creation and God."

"This conversation is definitely worth listening to! The book is deeply satisfying, with knowledgeable and articulate advocates of differing positions expounding on areas of disagreement clearly as well as respectfully. At the same time, it is deeply unsatisfying, but in a good way: I found my own assumptions challenged, my horizons stretched. I think differently after reading it. An excellent job by all participants, moderators included."

"This book provides a model of civil discourse in which two groups with opposing views engage in well-informed dialogue. All those interested in the creation and evolution discussion will benefit from both the charity and the clarity that mark the various positions presented."

"This Reasons to Believe and BioLogos conversation is highly commendable, and it's important for a number of reasons. First, its tone is irenic, gracious, and humble. Second, its participants trust the Christian integrity of the other conversation partners. Third, it takes the authority of Scripture seriously as participants grapple with the implications of biblical interpretation in light of scientific discovery. Fourth, the Southern Baptist theologians serving as moderators are effective in guiding and focusing the conversation as they call for clarification and further elaboration from both sides. Finally, this conversation takes for granted the strong evidence for an ancient earth, allowing the discussion to push past the young-earth versus old-earth debate to far more pressing issues needing attention within the Christian community."

Paul Copan, professor and Pledger Family Chair of Philosophy and Ethics, Palm Beach Atlantic University, coeditor of The Dictionary of Christianity and Science

"Because of the successful conversation presented in Old-Earth or Evolutionary Creation?, it is a resource that is well worth the investment, regardless of one's position on the age of the earth."

Acknowledgments
Introduction: How Did We Get Here?
Hugh Ross, Deborah Haarsma, and Kenneth Keathley
1. Boundaries: What Views Define Your Organization?
Robert Stewart, Deborah Haarsma, Hugh Ross, and Kenneth Samples
2. Biblical Interpretation: What Is the Nature of Biblical Authority?
Steve Lemke, John Walton, and Kenneth Samples
3. The Original Couple: What is the Range of Viable Positions Concerning Adam and Eve?
Ted Cabal, Loren Haarsma, and Kenneth Samples
4. Death, Predation, and Suffering: Is "Natural Evil" Evil?
James Dew, J. B. Stump, and Hugh Ross
5. Divine Action: How Does God Interact with the Natural World?
John Laing, J. B. Stump, and Jeff Zweerink
6. The Scientific Method: Methodological Naturalism or Natural Theology
James Dew, J. B. Stump, and Jeff Zweerink
7. Biological Evolution: What Is It? Does It Explain Life's History?
Ted Cabal, Darrel Falk, and Fuz Rana
8. The Geological Evidence: What Is the Natural History of the Earth and the Origin of Life?
Robert Stewart, Ralph Stearley, Fuz Rana, and Hugh Ross
9. The Fossil Evidence: Who Were the Hominids?
Robert Stewart, Ralph Stearley, and Fuz Rana
10. The Biological Evidence: Does Genetics Point to Common Descent?
John Laing, Darrel Falk, and Fuz Rana
11. The Anthropological Evidence: How Are Humans Unique?
Steve Lemke, Jeff Schloss, and Fuz Rana
Conclusion: What Is the Next Step?
Kenneth Keathley, Deborah Haarsma, and Hugh Ross
Bibliography
Contributors