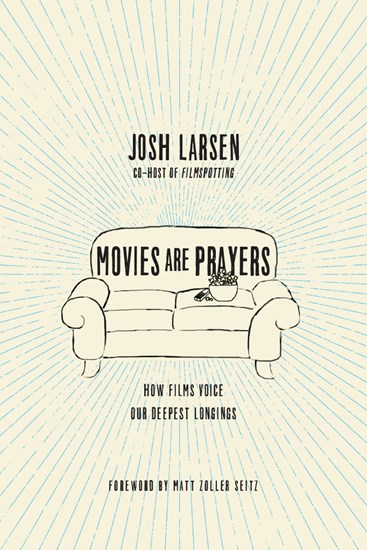 How Films Voice Our Deepest Longings

"Movies are our way of telling God what we think about this world and our place in it. . . . Movies can be many things: escapist experiences, historical artifacts, business ventures, and artistic expressions, to name a few. I'd like to suggest that they can also be prayers."

Movies do more than tell a good story. They are expressions of raw emotion, naked vulnerability, and unbridled rage. They often function in the same way as prayers, communicating our deepest longings and joys to a God who hears each and every one.

In this captivating book, Filmspotting co-host Josh Larsen brings a critic's unique perspective to how movies function as expressions to God of lament, praise, joy, confession, and more. His clear expertise and passion for the art of film, along with his thoughtful reflections on the nature of prayer, will bring you a better understanding of both.

God's omnipresence means that you can find him whether you're sitting on your sofa at home or in the seats at the theater. You can talk to him wherever movies are shown. And when words fail, the perfect film might be just what you need to jump-start your conversations with the Almighty.

"Going far beyond a simple assessment of Christlike martyr figures (the movies are lousy with 'em), Josh Larsen's passionate and movingly reflective new book makes an inspiring case for treating a provocative variety of films as prayers for all seasons. He writes on everything from Terrence Malick's The Tree of Life to Michael Haneke's Amour, teasing out the filmmakers' insatiable desire to wrestle with the unknowable. But his democratically theological approach to the medium he loves brings into play unexpected gems: Polanski's Chinatown, or Demme's The Silence of the Lambs (to which Larsen took his future wife on a date). 'Many films,' he writes, 'even the challenging ones, are capable of functioning as messy, mixed-up, miraculous prayer.' I've long been engaged by Larsen's film criticism on Filmspotting, but his book seeks and finds a higher power and a more mysterious set of concerns, somewhere out past the lobby."

"This is one of the best books on film and theology I've ever read. By conceiving of and engaging with movies as 'prayerful gestures received by God," Larsen guides the reader in a study that is itself a reverent, prayerful gesture. Packed with insights into how both the content and the form of films can mirror prayer, Movies Are Prayers is a must-read for anyone who has ever felt the pangs of transcendence in a movie theater. Yet this is a book as much about prayer as it is about pop culture. Readers will gain not only new language with which to understand movies, but an enlivened paradigm for understanding prayer."

"There's a lot of writing on film and theology, but a perspective like Larsen's—fresh, insightful, and interesting for anyone—is a rare gift to cinephiles and more casual movie viewers alike. In Movies Are Prayers, Larsen encourages us to rethink movies as not just vehicles for content, but as actual expressions of the heart's deepest longings, readjusting the way we think about both films and their creators—and, by extension, ourselves as viewers and critics."

"I'm about as far removed from religion and spirituality as one could possibly be, and yet Movies Are Prayers opened up for me an entirely new way of appreciating the movies I love and the art of filmmaking as a whole. As Larsen points out, it's so easy for even the most obsessive cinephiles among us to fall back on viewing cinema through the cynical lens of commercialization or a frothy lens of mere escapist entertainment. By reexamining an array of movies, including the ostensibly secular (Trainwreck, The Muppets), via the language of prayer, this engagement with the medium uncovers a different and fascinating approach to film theory."

"With a rich understanding of film history and the Scriptures, Josh Larsen's Movies Are Prayers provides a revelatory look at how movies—their messages, their characters, and even the process of making them—can serve as acts of worship. Larsen's readings of films are welcoming, accessible, and insightful. Movies Are Prayers will help Christians everywhere look at film in a whole new light."

"Larsen pulls on the complexities of the prayerful posture—yearning, lament, confession, joy, and more—that bring us closer to the self as recipient of film than previous comparisons of the movie theater with church and sacred space. Joining the breath of a movie with the breath of prayer, he teaches us anew. This vision of presence and the movements of prayer at the movies are offered through profound films often ignored by the Christian public, making the book a needed addition to the library of the prayerful, reflective, movie-loving Christian."

"Spoiler alert: Josh Larsen's Movies Are Prayers will have you reevaluating your relationship not just to the silver screen, but to story itself. Displaying a prodigious breadth of knowledge and an infectious passion for his subject, Larsen draws an invaluable map of the vast spiritual landscape staked out by cinema while outlining a persuasive, and dare I say exciting, approach to the life of faith—indeed, to life, period. Expansive, gracious, and beautifully written. I'm saying a prayer of grateful awe right now."

David Zahl, editor of The Mockingbird Blog, author of A Mess of Help

"Movies Are Prayers is for the movie lover and the infrequent viewer, the person who prays daily and the one who seldom does. Rather than looking at movies as mere entertainment or a means of teaching moral lessons, Larsen invites us to view the medium as a means of expressing our joy, sorrow, and longings—for a right world, right relationships, and right hearts. In the process, we not only see that movies are prayers, but we see our innate human desire to commune with our Creator."

"Larsen writes about love, loss, grief, suffering, and endurance. He writes about ecstasy and abandon, shame and guilt. He finds all of life in movies, even in movies that outwardly seem to have little to do with life as most of us know it, and he connects it back to scripture, to a rich tradition of spiritually inclined literature and visual art, to his own experience, to the history of this country and others, and to faiths besides Christianity. He can read a film as if it were a sacred text or admire it like a cathedral; other times he seems to have moved into it and lived inside it long enough to absorbs its sounds and smells, and memorize the way the sunlight hits the bedroom floorboards. The result is an essential book for anyone who thinks of cinema as a place of introspection as well as escapism, and believes that you can find signs and miracles anywhere if you know how to look for them."

From the foreword by Matt Zoller Seitz, editor in chief of RogerEbert.com, TV critic for New York magazine

"Movies Are Prayers is a delightful and important book that shows a particular way in which we can encounter God prayerfully in our daily lives. Although Larsen's focus here is on film, the language of prayer he introduces could easily translate to any other medium. Considering the ways in which watching movies can be a form of prayers stirs the imagination about the possibilities of what it could mean to live a life full of prayer or, in the words of the Apostle Paul, to pray without ceasing."

"Larsen is careful not to miscast particular filmmakers as deliberately setting out to create prayers. But by focusing on how films voice the deepest human longings, he makes a compelling case that movies are prayer-like for their creators—and for audience members who resonate with what they see on the screen. And so he compels us to approach movies and our fellow filmgoers humbly, with an eye and an ear toward those longings. I'll happily add my 'Amen.'"

"As he concludes, Josh Larson uses the film Rushmore by Wes Anderson to represent one work that follows the entire trajectory of the creation-fall-redemption-restoration arc and masterfully weaves his way through the different types of prayer on its journey. He encourages viewers to listen to each film's prayer carefully before adding their own words, and suggests that while we watch movies we should recognize that we are 'privileged eavesdroppers on a dialogue between God and the creative beings He has made.'"

"Whether you are more interested in prayer or movies, this book will inspire you to enhance your experience of both subjects."

"Movies are Prayers is a solid encapsulation of the changing tides in faith-based cultural criticism right now, reflecting a desire for engagement over isolation. It eloquently expresses the deep emotional associations that, for some of us, make both the church and the movie house sacred spaces, recognizing that sometimes popular culture expresses our deepest feelings better than we can ourselves. I wish this book had been around years ago—maybe then I wouldn’t have taken so long to watch The Last Temptation of Christ." 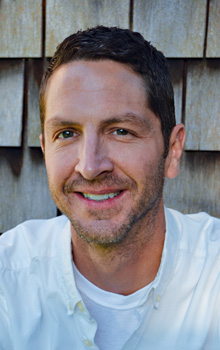 Josh Larsen is the co-host of the WBEZ radio show and podcast Filmspotting, as well as editor and film critic at Think Christian, a faith and culture website. He’s been writing and speaking about movies professionally for more than two decades, and he was the film critic for the Chicago-based Sun-Times Media for more than ten years. A veteran of the Sundance, Toronto, and Chicago International Film Festivals, Josh has given talks on film and faith at various Christian colleges. He also led the “Ebert Interruptus,” at the University of Colorado’s Conference on World Affairs. Read his movie reviews at larsenonfilm.com.