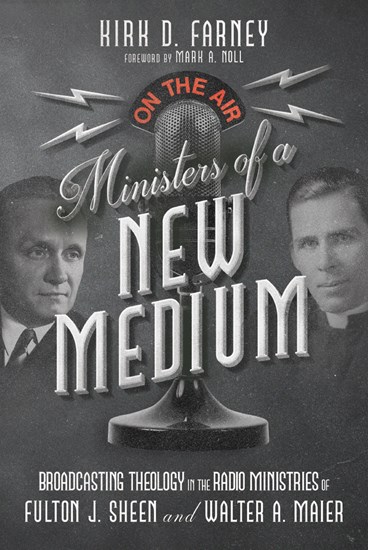 Ministers of a New Medium

Broadcasting Theology in the Radio Ministries of Fulton J. Sheen and Walter A. Maier

by Kirk D. Farney
Foreword by Mark A. Noll

During the anxiety-laden period from the Great Depression through World War II to the Cold War, Americans found a welcome escape in the new medium of radio. Throughout radio's "Golden Age," religious broadcasting in particular contributed significantly to American culture. Yet its historic role often has been overlooked.

In Ministers of a New Medium, Kirk D. Farney explores the work of two groundbreaking leaders in religious broadcasting: Fulton J. Sheen and Walter A. Maier. These clergymen and professors—one a Catholic priest, the other a Lutheran minister—each led the way in combining substantive theology and emerging technology to spread the gospel over the airwaves. Through weekly nationwide broadcasts, Maier's The Lutheran Hour and Sheen's Catholic Hour attracted listeners across a spectrum of denominational and religious affiliations, establishing their hosts—and Christian radio itself—as cultural and religious forces to be reckoned with.

Farney examines how Sheen and Maier used their exceptional erudition, their sensitivity to the times, their powerful communication skills, and their unwavering Christian conviction, all for the purpose of calling the souls of listeners and the soul of a nation to repentance and godliness. Their combination of talents also brought their respective denominations, Roman Catholicism and Missouri Synod Lutheranism, from the periphery of the American religious landscape to a much greater level of recognition and acceptance. With careful attention to both the theological content and the cultural influence of these masters of a new medium, Farney's study sheds new light on the history of media and Christianity in the United States.

"In the most uncertain of times, Maier and Sheen indiscriminately sowed radio programs that unapologetically chose theological content, rather than shtick or sensationalism, in order to inform and inspire anyone who would listen. This engaging volume not only sheds light on the rich historical evidence related to the groundbreaking radio ministries of Maier and Sheen but also corrects much of what is assumed about the surprising successes of The Lutheran Hour and The Catholic Hour. A welcome publication in an age that attempts to reduce any explanation of lasting significance to either personality or method."

"In examining two pioneers in religious broadcasting, Fulton J. Sheen and Walter A. Maier, Kirk Farney provides an excellent study of religion and media in mid-twentieth-century America. Farney pays close attention to their theological orientations as well as their influence on culture and society. This book is an important contribution to the history of Christianity in the United States."

Mark A. Granquist, Lloyd and Annelotte Svendsbye Professor of the History of Christianity at Luther Seminary in St Paul, Minnesota

"When Gutenberg invented his printing press, the book he printed was the Bible. In the great awakenings in the eighteenth century, John Wesley and fellow evangelicals produced so many Bibles, sermons, and all sorts of pamphlets, he was called 'the father of the religious paperback.' Evangelists like D. L. Moody and Billy Graham leveraged the architectural advancement of great arenas for their evangelistic meetings, while more recently megachurches take advantage of the interstate highway system that allows people to travel quickly to gather in their auditoriums. But it may be that the use of the radio by Christians represents the most powerful way technology has been used to influence the masses, and two of the most influential voices were Bishop Sheen and Walter Maier. Read this to be informed of an important era in Christian history and to be inspired to utilize technology in our time for Christ."

"Using the latest media technology to teach the Bible in ways that shape the surrounding culture is as old as the Protestant Reformation and as relevant as the latest theology podcast. In this well-written and theologically astute history, Kirk Farney takes us back to the golden age of radio, when the extraordinarily influential ministries of Walter Maier (The Lutheran Hour) and Fulton Sheen (The Catholic Hour) entered millions of American homes over the airwaves. Dr. Farney shows how these two religious broadcasters adapted their message to a new medium and addressed the pressing spiritual, theological, and sometimes political issues of the twentieth century. His account does more than bring these two radio personalities alive; it focuses a sharp lens on important technological, cultural, and ecclesiastical trends in American history."

"Two Christian leaders, Roman Catholic Fulton Sheen and Lutheran Walter A. Maier, both of whom served in what might be considered traditional denominations, helped draw their ethnic traditions into the American religious mainstream through their adoption and advocacy for the use of new media and technology. Seeing radio as a God-given tool in service of the proclamation of the gospel, they also helped transform the shape and practice of the larger Christian community. In Ministers of a New Medium Kirk Farney tells this remarkable story in a way that draws the reader deeply into the lives of the aforementioned men, along with the development and functioning of their radio programs: Sheen's The Catholic Hour and Maier's The Lutheran Hour. Working on the bleeding edge of technological development, Maier and Sheen helped transform the twentieth-century church by using their 'golden mouths' and 'ethereal pulpits' to become 'pastors of the airwaves' with the result that, perhaps unknowingly, they were transforming the very nature of what it means to be the church and how that church may express itself."

"This carefully researched and elegantly written study examines two major figures for US Catholics and Lutherans in the twentieth century: radio preachers who entered millions of homes with eloquent and sophisticated pastoral and theological teaching. Fulton Sheen and Walter Maier both deserve closer attention on their own, and comparing them yields new insights into the history of American Christianity. Yet given the profound changes that have occurred in Christian media globally since their day, especially with the explosion of Pentecostal media in bewildering variety, these earlier seminal figures, here carefully analyzed, create possibilities for future comparative studies. These two cases, here compared across various registers, invite future research that could distinguish truly innovative religious media production and dissemination from those merely iterative, for example, in the financing and organization of media production, the crafting of messages from theological and other perspectives, and the practices operative in the creation of listening/watching/perceiving publics who 'tune in' to Christian media."

"Ministers of a New Medium offers a fascinating look at how Dr. Fulton J. Sheen and our own broadcast pioneer Dr. Walter A. Maier leveraged the new medium of radio to share the gospel with Americans who were desperately seeking an outlet during troubled times. By offering meticulous details gathered through countless hours of research, Kirk D. Farney parallels the lives and teachings of these groundbreaking religious leaders and traces the overwhelming challenges that each faced and overcame to become a top radio personality of his era. By grasping the significance of using radio for evangelism to the masses, Dr. Maier's vision and persistence paved the way for a global ministry that today not only provides The Lutheran Hour as the longest-running Christian radio program in history but utilizes emerging technologies to share Christ's love with tens of millions of people in more than sixty countries."

Every Leaf, Line, and Letter

Kirk D. Farney (PhD, University of Notre Dame) is vice president for advancement, vocation, and alumni engagement and a member of the history faculty at Wheaton College (Illinois).