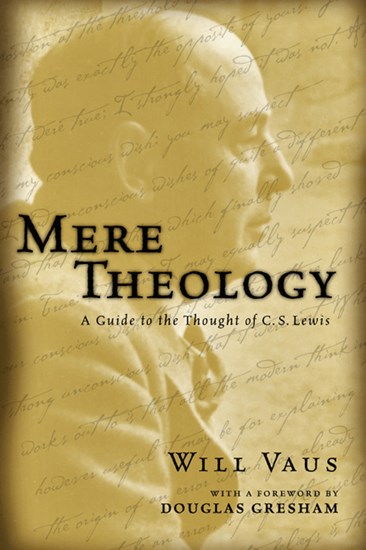 A Guide to the Thought of C. S. Lewis

by Will Vaus
Foreword by Douglas Gresham

What did C. S. Lewis believe about God, Jesus Christ, the Holy Spirit, heaven, hell, creation, the Fall, the forgiveness of sins, marriage and divorce, war and peace, the church and sacraments, masculinity and femininity?

Lewis was not a professional theologian, but anyone who has read his writings--whether fiction or nonfiction, essays or correspondence--knows that profoundly Christian convictions permeate them all. The more one reads, the more it becomes clear that Lewis could write with charity and simplicity while preserving theological accuracy because he was well informed and thoroughly grounded in the Christian faith.

Will Vaus has masterfully brought together Lewis's thought from throughout his voluminous writings to provide us a full-orbed look into his beliefs on twenty-five Christian themes. This book gives us not only a comprehensive view of Lewis's theological convictions but also guidance and encouragement for our own spiritual journeys toward the God whom Lewis found so real, personal and present.

"In this book Will Vaus has carefully and thoroughly examined all of Jack's published thinking and followed his trains of thought through a lifetime of development, showing us how the theology that governed Jack's life grew and ripened through his letters, his books and his essays until we can understand not only what Jack believed but also why he believed it and how he arrived at that belief. For those of us trying to grow in our faith and thus come closer to the Lord Jesus, this is a valuable addition to our libraries."

Douglas Gresham (from the foreword)

"Mere Theologyis a powerful and convincing expression of Christian faith and practice, for it is iconic as the lucid and comprehensive outline of C. S. Lewis's apologetics, interpreted by the selflessness of the author. For Will Vaus only interposes his own critique on appropriate occasion, as few other commentators of Lewis have done before him. Historically it also exposes the growing gulf between the theological orthodoxy of Mere Christianity and the Christian cultural compromises made since the 1960s."

"Vaus organizes Lewis's brilliant welter of arguments, stories and evocative illustrations into an orderly account of his entire view of the way things are under God. It is a job very well done, with meticulous precision and minimal comment. Lewis-lovers will be most grateful."

Foreword
Acknowledgments
Permissions
Introduction
1. Defending the Faith
2. Scripture
3. The Three-Personal God
4. God's Sovereignty and Human Responsibility
5. Creation
6. The Fall
7. The Person and Work of Christ
8. The Holy Spirit
9. Forgiveness of Sins
10. Faith and Works
11. Satan and Temptation
12. The Tao
13. Venus
14. Marriage and Divorce
15. Men Are from Mars
16. I Am the King's Man
17. What's Love Got to Do with It?
19. The Church
20. Prayer
21. The Sacraments
22. Hell
23. Purgatory
24. Heaven
25. The World's Last Night
Conclusion
Notes
Bibliography
Subject Index
Scripture Index

Vaus (M.Div., Princeton Theological Seminary) has served as a pastor in Pennsylvania, the Carolinas and California. He is the president of Will Vaus Ministries, an international creative communications outreach.