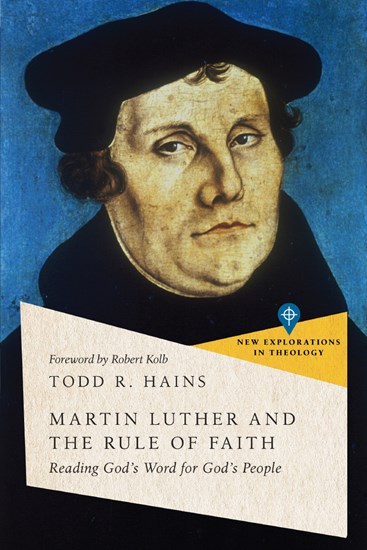 Martin Luther and the Rule of Faith

Martin Luther considered the reading of God's word to be his primary task as a theologian, a pastor, and a Christian. Though he is often portrayed as reading the Bible with a bare approach of sola Scriptura—without any concern for previous generations’ interpretation—the truth is more complicated.

In this New Explorations in Theology (NET) volume, Reformation scholar Todd R. Hains shows that Luther read the Bible according to the rule of faith, which is contained in the church's ancient catechism of the Ten Commandments, the Lord's Prayer, and the Apostles' Creed. Hains carefully examines Luther's sermons to show how Luther taught the rule of faith as the guard and guide of Bible reading.

This study will helpfully complicate your view of Luther and bring clarity to your own reading of God's Word.

"Todd Hains has written an outstanding book about Luther's regular use of the analogy of faith when interpreting Holy Scripture. I commend this project highly. It makes a timely contribution to our understanding of both Luther's biblical exegesis and Luther's catholic, or traditional, approach to inculcating the Christian faith."

"It is widely recognized that Martin Luther was a singularly important contributor to the development of Christian theology and biblical exegesis. Dissatisfied with allegorical approaches to Scripture, Luther insisted on reading Scripture according to the literal sense. A break with the Catholic exegetical tradition, right? At the same time, Luther leveled withering criticisms against the literalist exegesis of his fellow Reformers, most of whom surely thought they were simply following his lead. How to place Luther within the emerging streams of Protestant biblical interpretation? By attending to Luther's exegetical deployment of the analogia fidei, the 'rule of faith' given in the Apostles' Creed, Todd Hains's meticulous study sheds new light on these questions. Sampling Luther's sermons in extenso, Hains will surprise even the seasoned reader of Luther with this thorough demonstration of the prominence therein of the analogia fidei. The result helps us better understand how Luther found himself fighting an exegetical Zweifrontenkrieg against both Catholic allegorizing and Protestant literalizing. The lessons from Hains's study, moreover, extend well beyond this important historical point. The Luther we meet here will challenge all serious Christian readers of the Bible to rethink the place of the 'faith once given' for the exegetical task today."

"Church history, it has been said, is basically one long interaction of the church with the Bible. If so, the bold, and at times brash words of the sixteenth-century German Reformer Martin Luther have been undoubtedly one of the major voices in this unique colloquy. In this brilliant new study, Todd Hains delineates the various ways that Luther spoke into this centuries-long ecclesial conversazione. His study reveals that the German author, in his use of the rule of faith as an interpretative key, had far more in common with preceding voices and echoes than is usually imagined. He was a truly a Catholic exegete. An important monograph."

"Martin Luther, the analogy of faith, and allegory are all often employed like wax noses in contemporary hermeneutical debates. 'Luther said this,' 'the analogy of faith is that,' and 'allegory says anything you want it to say' are common tropes employed by a variety of interpretive camps in support of their own particular brand of biblical exegesis. Todd Hains's Martin Luther and the Rule of Faith speaks into this interpretive void and brings clarity and insight into an otherwise chaotic hermeneutical landscape. Hains describes and explains Luther's own views on the analogia fidei and allegory judiciously, and his tour of Luther's homiletical practice sheds further light on the subject. This is a retrieval project of the highest quality; even while it summarizes Luther's catechetical technique, it also catechizes the reader to read Scripture in light of its own catechism—the Ten Commandments, the Creed, and the Our Father. I cannot recommend this work highly enough to all readers, and especially to those who want to read the Bible with the saints."

Matthew Y. Emerson, professor of religion at Oklahoma Baptist University and author of "He Descended to the Dead": An Evangelical Theology of Holy Saturday

"Todd Hains describes how Luther was not an innovator but a faithful transmitter of the Christian tradition of biblical interpretation that relied on the rule of faith as conceptual lens to interpret the Bible. Hains detracts from a common interpretation of Luther as protagonist of the literal text that allows the reader—any reader—to interpret the plain sense of the text according to its literal grammatical sense. Martin Luther and the Rule of Faith is an impressive contribution to the study of the 'Catholic Luther' with its claim that Luther interpreted the Bible through a communal lens that had been in place since that lens was formulated in the early church and through the medieval tradition."

Christine Helmer, Peter B. Ritzma Chair of Humanities and professor of German and religious studies at Northwestern University

"In this deeply researched and accessibly written book, Todd Hains provocatively argues that Martin Luther was a Catholic interpreter of Scripture. The father of Protestantism interpreted Scripture not according to personal whim, subjective impression, or any rule external to Scripture itself, as it sometimes claimed, but always according to the analogy of faith (Rom 12:6), that is, the catechism. Hains convincingly shows that Luther's understanding of the Ten Commandments, the Apostles' Creed, the Lord's Prayer, and the sacraments governed his exegesis of the Bible, informing his every interpretive move. Hains commends the same approach for biblical interpretation today."

"In this impressive work, Todd Hains convincingly demonstrates the central place that the analogy of faith (analogia fidei) occupied in Martin Luther's theology and exegesis, and the significant ways it shaped his ministries as pastor, professor, polemicist, and doctor of the church. Scholars and students who engage this important book will never read the German Reformer the same way again."

"Where would Luther stand in today's debates over how to read the Bible? 'Here I stand,' yes, but where is 'here'? Todd Hains demolishes the caricature of Luther encouraging individuals to read the Bible for themselves. In its place is the real, flesh-and-blood Luther who insists on reading the Bible according to the Rule of Faith: the three-corded catechism consisting of the Ten Commandments, Apostles' Creed, and Lord's Prayer. Where should we stand? On Scripture alone, to be sure, when read according to a hermeneutics of catechized faith."

"Like the mastery of phonics for literacy, proper instruction in the simple foundations of the Christian faith opens up a disciple of Jesus to its immense profundity. That was Luther's conviction as a preacher and teacher of the Bible. That is also what Todd Hains demonstrates in his helpful account of Luther's analogical use of the catechism christologically and pastorally as the key to unlock the riches of God's Word. In this excellent book Hains examines Luther's sermons on five passages as test cases to show how he did this."

"What a rich and rewarding book! Todd Hains has provided us with an energizing guide to reading the Bible precisely as Holy Scripture. He shows not only that Luther was profoundly trinitarian in his Bible reading, but more importantly how. And his insights cut to the bone, shedding light on Luther's reading of Scripture as rooted in familiarity with the Ten Commandments, the Apostles' Creed, and the Our Father. In doing this Hains reaches into our own reading of Holy Scripture with surprising immediacy. Prepare for some of your caricatures of Luther to be smashed, but also be prepared to be delighted and fed by a work dripping with theological wisdom and energy."

"Drawing on extensive research in Luther's copious writings, Todd Hains has not only unlocked Luther's hermeneutical method but also given contemporary Christians an excellent guide into the mysteries of God's Word. This book is a treasure trove for preachers looking for better ways to feed their flocks with good solid nutrition gleaned from the Scriptures. Luther's approach to reading Scripture remains cutting edge and essential for contemporary Christians. In Todd's words, 'The same old catechism shines new light on new questions.' I think he's right. No matter your theological tradition, this book will broaden your mind and warm your heart." 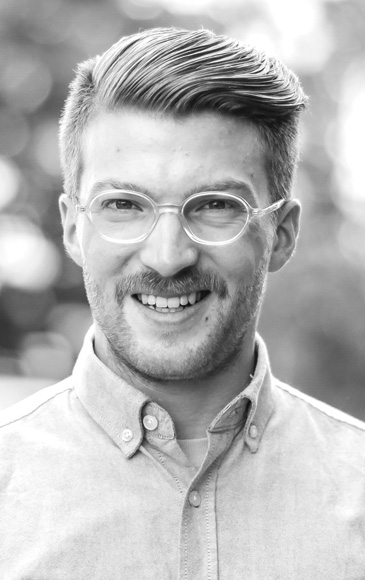 Todd R. Hains (PhD, Trinity Evangelical Divinity School) is an academic editor at Lexham Press, where he launched and edits the Christian Essentials series, Lexham Ministry Guides, and a children’s catechism series (FatCat Books). He was previously the assistant project editor of the Reformation Commentary on Scripture and is the co-editor of the Acts volume in that series.