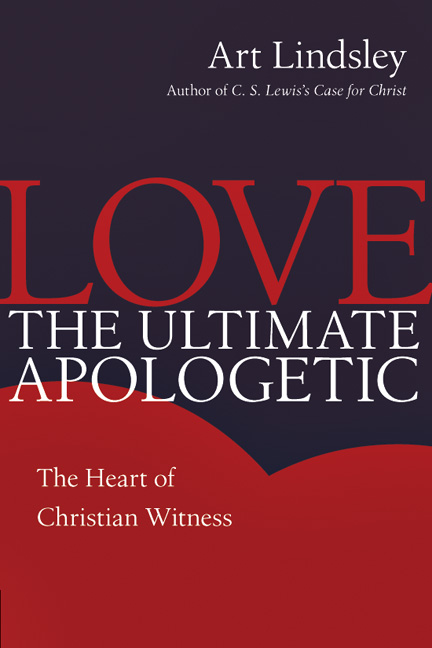 The Heart of Christian Witness

Defending the Christian faith is a multidimensional task. But central to that task must be the presentation and example of the uniqueness of Christian love. Author and apologist Art Lindsley explores the persuasive and illuminating power of Christ-like love expressed in commitment, conscience, community and courage. Such love, Lindsley shows us, does indeed bear ultimate witness to the living truth of Jesus Christ.

"Art Lindsley enriches modern apologetics with his thorough and careful exploration of Christian love. Lindsley winsomely shows how atheism and a host of world religions subvert or compromise the concept of love when these worldviews are taken to their logical conclusions."

"A simple, clear and effective argument for Christianity as the only worldview that justifies the thing we all, deep down, know is life's highest meaning and value: charity, unselfish love. Simple but irresistible."

"Lindsley is right: Love is the final apologetic. But what does that mean? Read this book. Don't just agree with it. Act on it. You'll be living kingdom apologetics."

James W. Sire, author of The Universe Next Door and Why Good Arguments Often Fail

. . .his explorations and ruminations are thoughtful and provocative, nothing mushy, always balanced and solidily Biblical.

Lindsley points out how there is often a contradition in many church families. Love is spoken about, but often not felt. This book wasn't light reading, but it is worth the time. I learned a lot.

Art Lindsley is vice president of Theological Initiatives for the Institute for Faith, Work and Economics in McLean, Virginia. He is a conference and retreat speaker, and he has taught extensively at several theological seminaries. He is also ordained in the Evangelical Presbyterian Church. His books include True Truth, C. S. Lewis's Case for Christ and Classical Apologetics, which he cowrote with R. C. Sproul and John Gerstner. He and his wife, Connie, partner in a teaching and discipleship ministry, Oasis, based in the Washington, D.C., area.