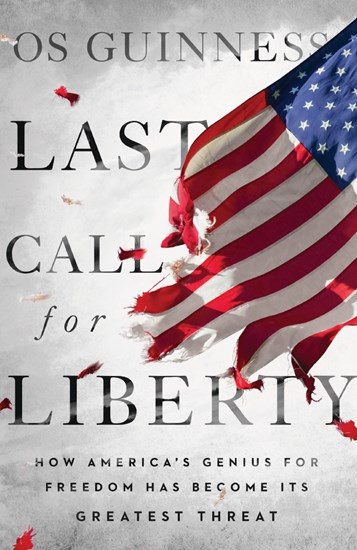 How America's Genius for Freedom Has Become Its Greatest Threat

The hour is critical. The American republic is suffering its gravest crisis since the Civil War. Conflicts, hostility, and incivility now threaten to tear the country apart. Competing visions have led to a dangerous moment of cultural self-destruction. This is no longer politics as usual, but an era of political warfare where our enemies are not foreign adversaries, but our fellow citizens.

Yet the roots of the crisis are deeper than many realize. Os Guinness argues that we face a fundamental crisis of freedom, as America's genius for freedom has become her Achilles' heel. Our society's conflicts are rooted in two rival views of freedom, one embodied in "1776" and the ideals of the American Revolution, and the other in "1789" and the ideals of the French Revolution. Once again America has become a house divided, and Americans must make up their minds as to which freedom to follow. Will the constitutional republic be restored or replaced?

This grand treatment of history, civics, and ethics in the Jewish and Christian traditions represents Guinness's definitive exploration of the prospects for human freedom today. He calls for a national conversation on the nature of freedom, and poses key questions for concerned citizens to consider as we face a critical chapter in the American story. He offers readers a checklist by which they can assess the character and consequences of the freedoms they are choosing.

In the tradition of Alexis de Tocqueville, Guinness provides a visitor's careful observation of the American experiment. Discover here a stirring vision for faithful citizenship and renewed responsibility for not only the nation but also the watching world.

"It will be a tragedy of inestimable proportions for the American people if that great nation eats its own legendary commitment to freedom from within. Equally, to lose the leadership of the world's most powerful champion of liberty would be truly dangerous for non-Americans everywhere in these increasingly unsettled times. Os Guinness has gifted us magnificently with the insights and understanding of a lifetime in this book, which really needs to be read—urgently—across the length and breadth of the world."

"Os Guinness has stood as a beacon of eloquence and insight. In a host of important books, he has chronicled the struggle of those who resist the modern world's descent into carnival culture. Last Call for Liberty is his masterwork—an urgent guide that leads out of the maze America has wandered into. For those who seek to understand the best of freedom's vital gifts, Guinness is the master class leader."

"If you care about the future of America—no matter where you are on the political spectrum—then do yourself a favor and read this book. I believe you will be encouraged to look at America in a new light, and hopefully all who love her will find a new energy to make her healthy again and keep her strong. Freedom-loving people everywhere will be grateful you did."

"With moral clarity and a deep sense of history, Os Guinness discerns the taproot of America's republican achievement as well as the forces that threaten to tear it asunder. In this penetrating critique of American democracy, Guinness emerges as the English voice of Alexis de Tocqueville—and not a moment too soon. Perhaps only an Englishman could deliver such a powerful reminder to Americans about why their revolution in human liberty has succeeded where others have failed. Against the prophets of gloom, Last Call for Liberty charts a pathway toward American renewal rooted in a bracing vision of human freedom."

Joseph Loconte, associate professor of history at the King's College in New York City, author of God, Locke, and Liberty: The Struggle for Religious Freedom in the West

"Guinness's impassioned tone, complex arguments, and dire warnings are sure to start conversations among readers interested in the intersection of politics and religion in America."