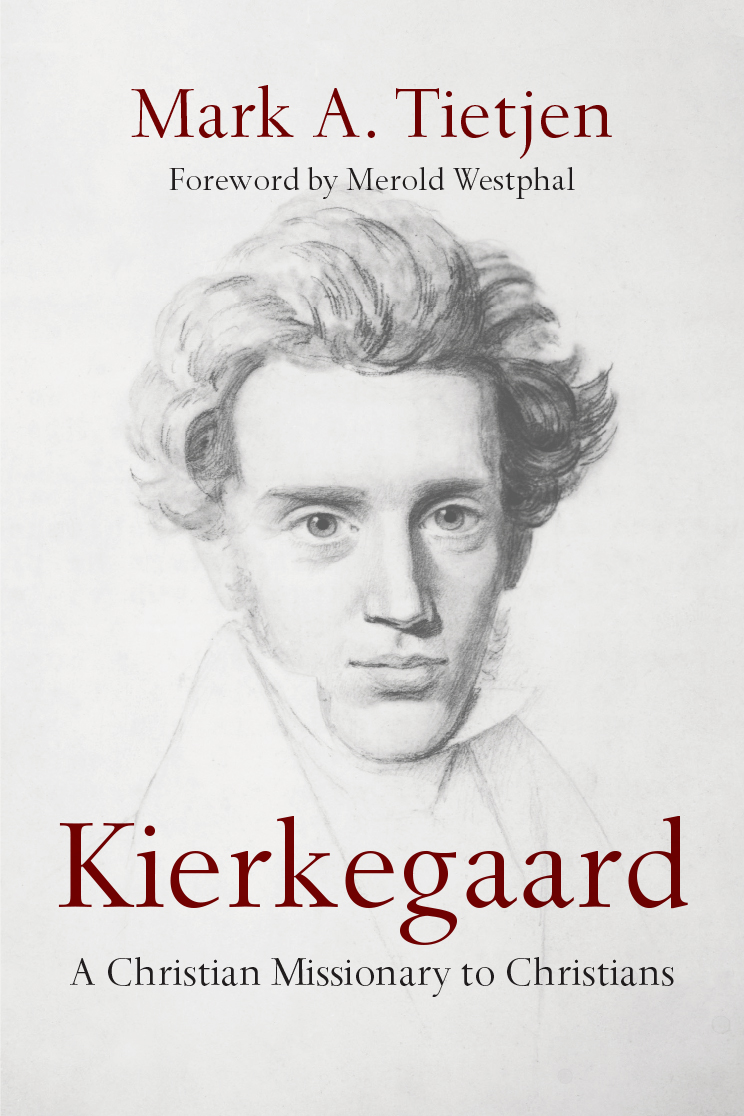 A Christian Missionary to Christians

by Mark A. Tietjen
Foreword by Merold Westphal

Søren Kierkegaard (1813-1855) had a mission. The church had become weak, flabby and inconsequential. Being a Christian was more a cultural heritage than a spiritual reality. His mission—reintroduce the Christian faith to Christians.

How could he break through to people who were members of the church and thought they were Christians already? Like an Old Testament prophet, Kiergegaard used a variety of pointed and dramatic ways to shake people from their slumber. He incisively diagnosed the spiritual ailments of his age and offered a fresh take on classic Christian teaching.

Mark Tietjen thinks that Kierkegaard's critique of his contemporaries strikes close to home today. We also need to listen to one of the most insightful yet complex Christian thinkers of any era. Through an examination of core Christian doctrines—the person of Jesus Christ, human nature, Christian witness and love—Tietjen helps us hear Kierkegaard's missionary message to a church that often fails to follow Christ with purity of heart.

"Kierkegaard's reputation as a profound religious, poetic, philosophical and psychological thinker and writer is widely recognized, especially in the academic world, but his devastating critique of Christendom is often lost at the level of the institutional church, for which it was primarily intended and where it was and is most needed. Mark Tietjen's book will go a long way toward redressing that lacuna by introducing Kierkegaard specifically as a Christian missionary to contemporary Christians. In it he not only seeks to allay suspicions, fears and misconceptions about Kierkegaard as a philosopher and Christian thinker but also to explicate the basic elements of his thought in a manner that makes it accessible to fellow believers who want to better understand what it means to be a Christian and to deepen their faith in Christ."

"I often meet young adults who call themselves 'recovering evangelicals,' or, similarly, who explain as quickly as they can up front that they have moved beyond their days in a nondenominational parachurch group. One such student gave me a refrigerator magnet that says: 'Yeah, like Jesus would live in a gated community and attend a mega-church.' Reading Kierkegaard with young Christians caught between the twinned perspectives of idealism and cynicism amplifies Kierkegaard's pastoral voice. Mark Tietjen's book describes, in the vernacular, how Kierkegaard quickens readers to receive the daily gift of a faith that has often been taught either as a cosmic culture battle or as a guide to good manners. This book is an inviting, loving introduction to the writings of a Christian intent on revivifying the faith of the faithful."

"Kierkegaard famously described his task as 'reintroducing Christianity into Christendom.' In this wonderfully rich and clearly written book Mark Tietjen helps us understand what Kierkegaard meant by this, and thereby helps us see how vital it is for the contemporary church to encounter Kierkegaard's thought. Kierkegaard's message will pull us away from complacency and help us understand anew what it means to be a follower of Jesus. Kierkegaard shows us that this is a task for a lifetime; we never 'arrive' short of death, but we can go ever deeper in faith, hope and love."

"Kierkegaard dismally feared that his writings, which he carefully crafted to affect the individual reader's self-understanding and reorient the reader's heart to Jesus Christ, would fall into the hands of 'the professors' and be turned into some kind of philosophical 'position' that could be debated in seminar rooms and lecture halls to distract its practitioners from attending to the spiritual condition of their souls. 'The professors' have amply fulfilled Kierkegaard's fear, but occasionally a book appears that reflects his original intention for his writings and even helps them to have the intended effect. Tietjen's wise and winsome book is one of them."

"Although the works of Kierkegaard are widely studied by scholars in the academy, Kierkegaard himself was much more interested in speaking to 'ordinary' people, whose company he certainly preferred to that of professors who specialized in obscuring the true nature of Jesus' call to discipleship. With this book, Mark Tietjen succeeds in making Kierkegaard accessible to the people whom Kierkegaard cared about most, those who have an interest in Christianity precisely because they really do want to know what being a follower of Christ entails. Tietjen's work is an excellent guide to one of the most challenging and most profound thinkers of the Christian tradition."

"I've long believed that Kierkegaard's greatest relevance today is as a kind of prophet—in the sense of a critical, incisive voice—for western Christianity. Mark Tietjen creatively presents the prophetic Kierkegaard as a 'Christian missionary to Christians,' many of whom are deeply suspicious of Kierkegaard. Mark's book is a great resource for Christians, especially those who have been mislead by faulty interpretations of the great thinker. He eloquently shows that Kierkegaard is not just a 'Socratic gadfly,' but also a gadfly for the gospel."

"This is the best kind of introduction to Kierkegaard because it shares his goal, that of making us more faithful Christians. Kierkegaard's unique method of doing this was to 'deceive' us into the truth. By giving us sound Christian wisdom for the life of faith that just happens to be Kierkegaardian in word and spirit, Mark Tietjen deceives us into Kierkegaard."

"Through a combination of careful scholarship, everyday examples and personal reflections, Mark Tietjen brings Kierkegaard's thought to life for new audiences. While simplified and in plain language, this presentation keeps Kierkegaard's writings genuinely philosophical. That is, Mark shows how Kierkegaard clarifies important concepts such as faith and love as a foundation for Christians to evaluate their own practice and understanding of Christianity. The book is a helpful reminder for our time that 'Christian thought' does not have to mean apologetics. Through Kierkegaard, Mark reminds us that the relationship between philosophy, theology and everyday life can be rich and subtle, and that above all it should be challenging."

"Tietjen effectively reminds us of how Kierkegaard, with what amounts to a doctorate in theology, was deeply concerned about church culture in Denmark at a time when being a Dane and a Christian were commonly equated, and where the church's extraordinary teachings about Jesus (the God-man) seemed too easily accepted by many and too little acted upon. Tietjen show us Kierkegaard's life-long passion, as a committed critic, was to call the Church of Denmark back to discipleship after Christ. . . . Tietjen brings out a key thought of Kierkegaard's: unless we proclaim what must be offensive—that the lofty God became a lowly human for our salvation—we have not proclaimed the gospel. I ask, do we evangelicals take this for granted? Then let's heed the Dane's warnings through Tietjen: don't lose its wonder or be content to admire Jesus, rather than imitate (follow) him."

"While Tietjen makes no pretense of giving us a Kierkegaard primer, he has produced a valuable contribution for those who might struggle to distinguish Evangelical faith from Evangelical culture."

"Who can forget Schaeffer's charge that the melancholy Dane's notion of the 'leap of faith' accelerated Western civilization's 'escape from reason' and plunged us into the 'line of despair'? Due to this and similar caricatures, evangelicals have often viewed Kierkegaard with suspicion. Fortunately, Mark Tietjen's Kierkegaard: A Christian Missionary to Christians (IVP Academic) should help set the record straight, not least on what Kierkegaard meant by the concept of 'leap.' . . . Writing for those who don't know philosophical and theological jargon, he shows how Kierkegaard's body of work bears witness to the fact that nominal Christianity is no Christianity at all. . . . Historically, evangelicals have focused almost obsessively on apologetics and doctrinal precision. These are not bad things, Kierkegaard would say. But they are not the essence of Christianity. To be pure in heart means repenting of our sins, reorienting our will to obey Jesus, and suffering willingly on his behalf. We still need a 'missionary to Christians,' and Tietjen reconnects us with someone who fits the job description as well as ever."

"Kierkegaard: A Christian Missionary to Christians is a pleasure to read. Tietjen brings a great resource to all Christians. This book is an excellent primer to Kierkegaard's religious thought, and Tietjen shows how the nineteenth-century Danish philosopher can speak meaningfully to a modern audience."

ABOUT Mark A. Tietjen 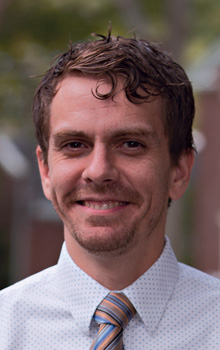 Mark A. Tietjen (PhD, Baylor University) is chaplain and Grace Palmer Johnston Chair of Bible at The Stony Brook School in Stony Brook, New York. He previously served as associate professor and program director of philosophy at the University of West Georgia. Former secretary-treasurer of the Søren Kierkegaard Society, Tietjen is the author of Kierkegaard, Communication, and Virtue: Authorship as Edification, and his articles have appeared in a variety of journals and books, including Faith and Philosophy, International Philosophical Quarterly, and the Journal of Psychology and Christianity.

BY Mark A. Tietjen