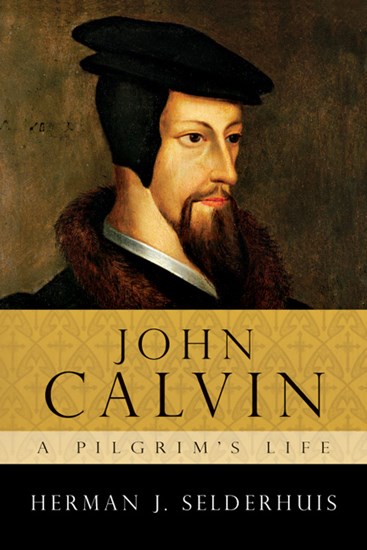 Professor and renowned Reformation historian Herman Selderhuis has written this book to bring Calvin near to the reader, showing him as a man who had an impressive impact on the development of the Western world, but who was first of all a believer struggling with God and with the way God governed both the world and his own life.

Selderhuis draws on Calvin's own publications and commentary on the biblical figures with whom he strongly identified to describe his theology in the context of his personal development. Throughout we see a person who found himself alone at many of the decisive moments of his life--a fact that echoed through Calvin's subsequent sermons and commentaries. Selderhuis's unique and compelling look at John Calvin, with all of his merits and foibles, ultimately discloses a man who could not find himself at home in the world in which he lived.

"One would think that with all the biographies of John Calvin through the centuries there would be nothing new to say. Think again! Veteran Calvin scholar Herman Selderhuis has followed Calvin himself in going 'back to the sources' and provides a portrait of Calvin drawn exclusively from Calvin's own writings. The result is a fresh and invigorating look at the human person behind all the caricatures, the faithful servant of Christ who saw his life as being lived in the providence of God--a God whose ways he often did not understand. Find here a fully human Calvin whose commitment to the 'pilgrim life' instructs and inspires us still today."

Donald K. McKim, editor of Readings in Calvin's Theology, The Cambridge Companion to John Calvin and Calvin and the Bible

"This is simply one of the best biographies of Calvin I have seen. Selderhuis has managed admirably to combine keen academic insight with a clear, engaging writing style and many delicious details. For all who are curious about Calvin, Selderhuis's John Calvin: A Pilgrim's Life is the place to begin."

"Five hundred years after the birth of John Calvin, the reformer of Geneva continues to loom large as one of the most formative figures in Christian history, and one of the most difficult to know up close and personal. Herman Selderhuis presents here a fresh new biography based on a careful reading of Calvin's letters and other sources. Calvin emerges as neither hero nor villain, but rather as a flawed and forgiven pilgrim who never lost sight of his final destination and inspired many others along the way. A wonderful introduction to a great teacher of the church!"

"This new and engagingly written interpretation of Calvin by a major scholar will be very useful for jaded readers who are willing to give Calvin another chance--and rediscover the very human, very realy sixteenth-century person."

"The genius of this book lies not, admittedly, in its revelation of novel biographical facts about Calvin but in the humanity it manages to impart to a subject who, despite frequent scrutiny, has somehow remained so ethereal for several centuries."

"A close and intimate look at the reformer of Geneva whose thoughts are shown to be more complex and feelings even richer than may seem on the surface. Any clear writing that reintroduces and stimulates interest in the life and thought of this great reformer is to be greatly appreciated."

"A fascinating book, easy to read and extremely interesting. Once having dipped into it, one finds the book hard to lay aside. This is an attractive feature and recommends it for future reading. Anyone, including high school students with an interest in their heritage, will find it worthwhile."

"Selderhuis has written a beautiful biography. One of the major contemporary interpreters of Calvin's life and thought, he brings a wealth of knowledge and experience to this refreshingly readable, entertaining, informative biography. Highly recommended."

"Five hundred years after the birth of John Calvin, it is appropriate to have an excellent new biography on his life. Too often Calvin books relate only to his theology without any discussion of the man himself. The book explores all facets of Calvin's life."

"Selderhuis has uncovered numerous facts not found in other biographies about the Reformer's life and thought."

"In the midst of the proliferation of new titles on Calvin, this new biography stands out as a gem. Selderhuis exhibits a wealth of knowledge of the sources on Calvin's life and locates Calvin squarely within the setting of the sixteenth-century Reformation."

"Among many, many publications about Calvin in this 500th anniversary of his birth, this one stands out for its being based largely on Calvin's letters and other writings--Calvin himself having said that we learn most about people from their letters."

"Selderhuis has done us a great service by producing a well-written biogrpahy of the Reformer of Geneva, John Calvin. I would heartily recommend Selderhuis's biography to all adult believers, and not simply to Calvinists."

"This book adds a great deal to our knowledge of the Geneva Reformer. Selderhuis is a Calvin scholar of international stature and in this biography he makes extensive use of Calvin's correspondence to provide one of the most vivid portraits of Calvin currently available."

"This book is written for a popular readership, and has a breezy, steam-of-consciousness style throughout. Fun, short, accessible book with a nice eye for detail."

"This book will do much to dispel prejudice, and calm those who have been fed on disinformation about the man who did more than any other to establish the Protestant Reformation on the basis of scriptural truth."

"I would highly recommend this life of Calvin, as Selderhuis seems to have gotten into the shoes of Calvin, and you get insight into how the man thought, and why he did and said what he did. All in all, I found it a very enjoyable read, based on original sources, having the feel of a scholar who has soaked deeply into Calvin's life and work."

Jonathan Edwards and the Ministry of the Word

Herman J. Selderhuis is professor of church history and church polity at the Theological University Apeldoorn (Netherlands) and director of Refo500, the international platform for knowledge, expertise, and ideas related to the sixteenth-century Reformation. He is a leading Reformation historian and author or editor of several books, including John Calvin: A Pilgrim's Life, Calvin's Theology of the Psalms, and Psalms 1-72 in the Reformation Commentary on Scripture. He also serves as the academic curator of the John a Lasco Library (Emden, Germany) and as president of the International Calvin Congress.