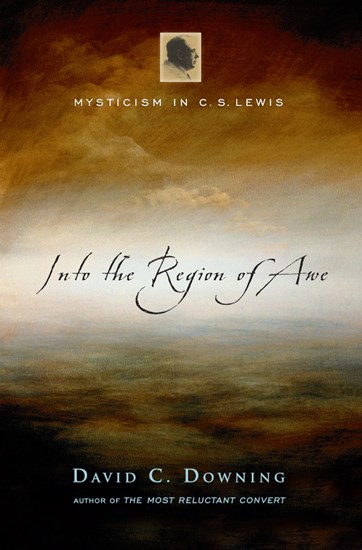 Into the Region of Awe

C. S. Lewis is generally thought of as a commonsense Christian, one who offers theology that is understandable and morality that is practical. And yet, when writing about Narnia to a class of fifth graders who asked if it were possible to visit Aslan's country, Lewis replied that the only way he knew of was through death but then added this curious qualifier: "Perhaps some very good people get just a tiny glimpse before then." This simple sentence suggests a side of Lewis that most commentators have overlooked.

If one takes another look at Lewis, one can find a sense of the mystical all through his writings, from his memoir Surprised by Joy to Perelandra, from his nonfiction essays to his Narnia stories. In this book David C. Downing explores the breadth of Lewis's writing, introducing us to Christian mysticism as Lewis knew it and to the contemplative writers who most influenced him.

Though he showed a lifelong interest in mysticism, Lewis was not an uncritical admirer. As Downing highlights, Lewis had areas of concern and points of departure with some mystical thought. Lewis's comments about misguided forms mysticism are especially pertinent in our own era of faddish or eclectic religious thought. Exploring Lewis's sense of the mystical can help us safeguard ourselves from false mysticisms even as it opens the way to a deep and full experience of God's very presence with us. In the end we too may find ourselves drawn--as Lewis put it--"into the region of awe."

"C. S. Lewis did not think of himself as a mystic, David Downing argues, but he was far more interested in mysticism and even the occult than many people imagine. Downing plumbs both Lewis's fiction and nonfiction and shows convincingly that the cast of Lewis's mind is not exhausted by his brilliant intellect and his fertile literary imagination. Deep within Lewis lies an appreciation for, and engagement with, the mystical way. Downing offers a wonderful corrective to a C. S. Lewis we are tempted to cut down to fit our own mental, spiritual and imaginative wardrobe. Beautifully written, a joy to read."

James Sire, author of The Universe Next Door

"One does not commonly think of finding C. S. Lewis in the ranks of 'mystical' writers--Evelyn Underhill, Baron von Hügel, Meister Eckhart and company. But David Downing has probed, with great skill (and fidelity to Lewis's own vision) the works which we all know, and has opened up to us a fresh appreciation of this component in Lewis's writings. . . . Downing's prose style is worthy of his topic."

Thomas Howard, author of C. S. Lewis: Man of Letters and Splendor in the Ordinary

. . .a useful introduction for people who wish to explore the mystical side of Christianity.

Thought Provoking and fascinating, Christian literature and religion scholars will find this book an enjoyable read.

Acknowledgments
Introduction: The Overlooked Lewis
1.The Mystique of Mysticism
2. Mystical Elements in Lewis's Life
3. Christian Mysticism as Lewis Knew It
4. The Mystical Way in the Space Trilogy
5. Finding Words to Explore the Mind of God
6. Mystical Elements in the Narnia Chronicles
7. Lewis's Critique of Mysticism
8. Learning from the Mystical Way
Appendix: A Brief Timeline of Christian Mystics
Notes
Bibliography
Subject Index
Scripture Index

David C. Downing (PhD, University of California at Los Angeles) is the co-director of the Marion E. Wade Center at Wheaton College. Downing is the author of four books on C. S. Lewis, as well as a novel, Looking for the King. Downing is also an editor and annotator of the Wade Annotated Pilgrim's Regress and C. S. Lewis's Letters on Faith.