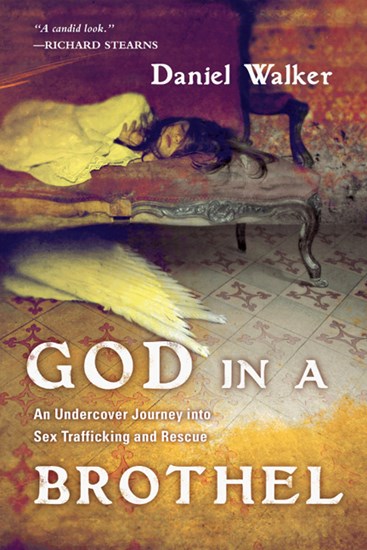 An Undercover Journey into Sex Trafficking and Rescue

This is the true story of an undercover investigator's experiences infiltrating the multi-billion-dollar global sex industry.

It is a story of triumph for the children and young teens released from a life of slavery and the rescuer who freed many hundreds of victims leading to the prosecution of dozens of perpetrators. And it is a story of haunting despair for those left behind in corrupt systems of law enforcement.

It is the personal story of Daniel Walker, one man who followed a path of costly discipleship, agonizing failure and unlikely redemption.

And it is a challenge to God's people to join in the battle that all might be freed.

The Anti-Trafficking Tour featuring Daniel Walker is coming to a city near you in October 2011! Visit www.ivpress.com/antitraffickingtour for tour schedule and more information.

"I trust you are brave enough to read God in a Brothel and respond to its challenge. It opens up a world where the light of the gospel needs to be revealed in all its glory, splendor and healing power to dispel this darkness and restore the lives broken and damaged by it. May God have mercy on us if we do not respond."

"This book plunges you full-on into a holy conspiracy, a top-secret mission of courageous love and liberation. May it inspire all of us to subvert injustice everywhere we see it."

"I hope that every Christ-follower who is serious about justice issues in our world will drop whatever they are doing long enough to read this book. The evils of human slavery and the sex trade industry are graphically depicted in these pages and should call us to reorder our priorities. This rare, behind-the-scenes snapshot not only raises awareness and calls us to action but fires off a warning shot for those who will go to the front lines of this battle."

"God in a Brothel tells the heartbreaking story of the horrors and prevalence of sex trafficking throughout the world. Daniel Walker offers a candid look at the scope of the problem, including the various kinds of trafficking, as well as the means to combat it. This book is a keen reminder that we as Christians have a moral responsibility to speak out and challenge the systems that perpetuate dehumanizing slavery and to ensure that captives are set free."

Richard Stearns, president, World Vision, and author of The Hole in Our Gospel

"While there are many books on the hell and horror of modern trafficking, Daniel further reveals the intimate personal pain and loss of fighting this evil on the front lines. In recent years we've witnessed an encouraging surge of engagement on the centuries-old problem of slavery, but with it has come a steep learning curve. We must stop measuring ourselves against glossy stories and good intentions. Daniel calls us to a more professional approach to the rescue and recovery of slaves, as well as better care for those engaged."

"A sobering and often harrowing account of an international mission to rescue sexually exploited children in the Third World--but also a message of hope, and a reminder that there are still people out there who are willing to risk all to bring this tragedy to the attention of others. I sincerely hope that this book will make a difference."

"This inspiring book tells the painful and costly story of one man's journey into the heart of the modern slave trade, the global sexual trafficking of women and children. It not only tells of the dramatic rescue of many innocent victims but of a struggle for justice with corrupt politicians and law enforcement agencies who allow this trade to flourish for their own personal gain. We have celebrated the ending of the African slave trade two hundred years ago, but an even bigger challenge exists on our own doorstep today."

"Absolutely fabulous. Gripping, wrenching, this book will make you cry. Everyone should read this powerful summons to justice and amazing witness to grace."

"Sex trafficking is a hot subject these days. Speakers, films, magazine articles and books have raised the consciousness of Christian people everywhere. The problem is that few of us have ever figured out ways to respond to this ugly exploitation. In this book, we have the story of one man's journey into that strange and dirty world to do what he could to provide deliverance and hope for those who are imprisoned with despair."

"God in a Brothel is a call to the church to become again the abolitionist it once was. It will challenge every believer, congregation and welfare agency."

"Walker summons us . . . to remain vigilant at every moment to a centeredness of the soul. With all the ego and empire-building in the current anti-trafficking movement, and in an epic battle against principalities and powers, it is perhaps the hardest thing to do and the most important of all."

"God in a Brothel is a gritty, frighteningly graphic memoir about one man's journey to use his faith, vocation, and humanity to help women and children who couldn't help themselves. . . . Walker's memoir forces readers to open their eyes. He rescued many and watched as others slipped away, but his account urges Christians to join him, to leave their comfy church pews and take their message to those who need it most."

"[Walker's] struggles with the seductions of a sinful underground world, and his anguish over failed attempts to free women and children, make for compelling reading."

"Walker creates a vivid picture of the people involved in modern-day slavery . . . God in a Brothel is different from other books that cover similar territory because of Walker's unique perspective from his years battling the sex trade. His sacrifices for the cause are an important reminder forthose who feel called to join the fight against slavery. Despite his deep wounds . . . He calls the reader to 'come alive with a passion for justice and a hatred of evil' and dreams the Church would rise up to thwart impediments to freedom and justice wherever they exist."

9 Southeast Asia: Their Names Are Lan and Milan
Facts: Prostitution of Children

13 Southeast Asia: Their Names Are Phi and Tan
Facts: Pedophiles

Daniel Walker has worked as an undercover investigator for a number of nonprofit organizations working to free women and children from sex trafficking in the United States and in over a dozen countries around the world. He holds a master's degree in Third World economic development from Eastern University in Philadelphia. He has over twenty years of experience in law enforcement and is currently working as a police detective based in New Zealand.