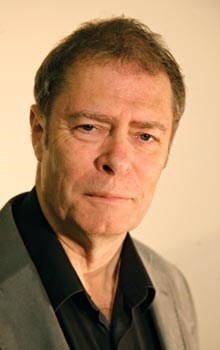 Troubadour, gospel singer and protest singer Garth Hewitt has released nearly forty albums in his storied forty-year music career while championing social justice worldwide through his human rights organization, the Amos Trust. The author of ten books on spirituality, social justice, and the arts, Garth passionately believes that it is time for people of all faiths to speak up and call for justice, especially for communities in developing or volatile nations. In 1985, Garth founded the Amos Trust, which promotes justice and hope for forgotten communities by partnering with local projects around the world to provide support, raise awareness, and lobby for change. These projects include work with street children in South Africa, promotion of human rights and sustainable communities for Dalits in rural India, community development and education provision in Nicaragua, and working toward peace and reconciliation in Palestine and Israel. In addition to touring for his musical career and his international advocacy for the underprivileged, for over twenty-five years Garth served on the board of directors for the Greenbelt Festival, a British arts festival with a commitment to social justice that is now attended annually by over 25,000 people. He is a canon of St George’s Anglican Cathedral in Jerusalem and associate priest of St Clement’s Eastcheap in London. He is also a patron of the Palestine Solidarity Campaign and a regular contributor to BBC Radio 2's Pause for Thought.