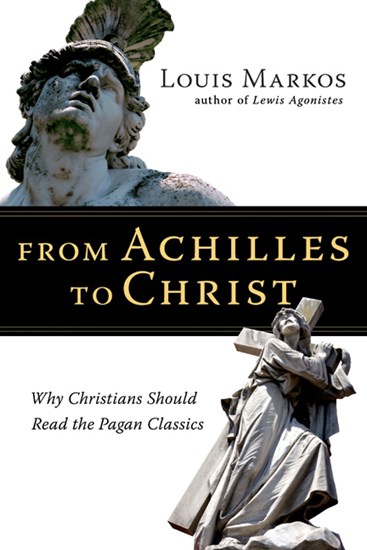 From Achilles to Christ

Why Christians Should Read the Pagan Classics

"The heart of Christianity is a myth which is also a fact."

In From Achilles to Christ, Louis Markos introduces readers to the great narratives of classical mythology from a Christian perspective. From the battles of Achilles and the adventures of Odysseus to the feats of Hercules and the trials of Aeneas, Markos shows how the characters, themes and symbols within these myths both foreshadow and find their fulfillment in the story of Jesus Christ--the "myth made fact." Along the way, he dispels misplaced fears about the dangers of reading classical literature, and offers a Christian approach to the interpretation and appropriation of these great literary works.

This engaging and eminently readable book is an excellent resource for Christian students, teachers and readers of classical literature.

"At a time when our cultural memory seems to have faded away into obscurity--when to say that something 'is history' is anything but a compliment--Louis Markos wisely reminds us of our continuing debt to the great poets and dramatists of the ancient world. Through cogent readings of Homer, Sophocles, Virgil and others, he searches the classics of antiquity for 'traces, remnants and intimations of that wisdom which made us.' Written in a clear and compelling manner, this timely study deserves a wide audience."

"From the earliest centuries of the church and throughout the Middle Ages, Christian thinkers pored over not only the Old Testament but Greek and Roman literature in search of foreshadowings of Christ. Christian readings of the classics fell out of favor in the modern world, but with From Achilles to Christ Louis Markos revives this venerable tradition. Professor Markos knows the difference between the Greeks and the gospel, but his illuminating interpretations of selected classics show that God did not leave the Athenians without a witness and capture the thrilling breadth of the evangelical proclamation that Jesus came 'in the fullness of the times.'"

"In The Pilgrim's Regress by C. S. Lewis, Father History explains how God sent the pagans pictures to reveal himself to them because, unlike the Jews, they had forgotten how to read. This is Lewis's way of echoing his friend Tolkien who insisted that the pagan myths contained 'splintered fragments' of the one true light that comes from God. Since we also live in an age that has forgotten how to read, we are in need of the pictures, presented by pagan mythology, as a means of seeing the prefiguration of Christ. Through this mythological prefiguration we can better understand the transfiguration of Christ in the Gospels. Christ reveals himself to us in these pagan pictures, and Louis Markos is an excellent guide to the allegorical icons to be found in them. I would go further: Louis Markos is one of the most exciting writers around today and there are few more able to lead us on a tour through God's gallery of myth than he is."

"Louis Markos's From Achilles to Christ is a remarkable work of scholarship and insight, making clear the congruence of ancient Greek myth with Christian revelation. It is a particularly valuable study in a time of widespread amnesia concerning the classical past and its role in shaping Western culture. Markos knows his texts and approaches them with equal poetic and theological skills. From Achilles to Christ is a telling argument for the value of the classics in extending and deepening the Christian imagination."

"This is a much-needed Christian introduction to the classical pagan sources that largely framed the Mediterranean culture in which Paul and other apostles proclaimed the gospel of redemption. The argument of this book would have been obvious to the church fathers, nearly all of whom were thoroughly familiar with the ancient literature that the author recommends to our study."

Patrick Henry Reardon, senior editor, Touchstone: A Journal of Mere Christianity, and author of The Trial of Job

. . .through a well-written and scholarly book, Markos has enriched our engagement with the ancient texts and challenged our thinking as Christian readers.

Larry Long, Journal of Faith and the Academy, Spring 2008

. . .a great "crash course" on the ancient Greek and Roman myths that every preacher should know.

. . .an accessible and interesting treatment of the great classical works.

Introduction: The Only Complete Truth