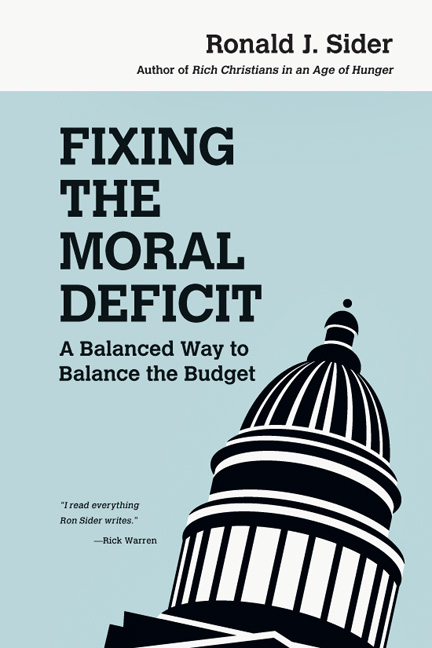 A Balanced Way to Balance the Budget

Some want to unjustly thrust the burden of the debt on our grandchildren. Others want to balance the budget on the backs of the poor. But both plans are morally bankrupt.

There is a way--a realistic way, a moral way--to fix the deficit. We can break political gridlock with solutions that stand on a foundation of solid values and fair play. If you are tired of politics as usual that fails to operate as if people mattered, take heart in Ron Sider's balanced, practical approach. Consistent with deeply Christian principles, he offers a way forward that truly provides justice for all.

"I read everything Ron Sider writes because he makes me think through angles and issues that I might not consider. He'll do the same for you."

"Ron Sider always brings together rigorous policy analysis and sound biblical principles to address political, social and economic issues. Fixing the Moral Deficit is a penetrating description of our nation's budget battle and shows how to bring a strong Christian perspective to it. It explains how our country got into a deficit crisis, why current proposals simply aren't good enough, and how we can get out of it in critical areas—including increased tax revenue and necessary spending cuts—while continuing to assist and empower poor people. He believes that Christians and other people of goodwill can work together to end the crisis in a way that is both economically sound and morally just. I agree, and commend this book to anyone who shares Ron's passion for a healthy future. Deficits are indeed moral issues, and how we resolve them is a moral issue too."

"For decades, Ron Sider has been helping Christians engage the political system without compromising our primary allegiance to Jesus and his cross. For years, Ron has been exorcising the demons from Capitol Hill and the Pentagon—and he invites us all to join the charge against the principalities and powers that possess our nation and threaten our hearts. Here is Ron's most recent masterpiece on one of the most urgent issues facing this experiment we call the United States of America."

"Thank God for this book! It gives the best survey of America's disastrous debt crisis, along with biblically based critiques of the options to resolve this crisis that are being proposed on Capitol Hill. What's more, Ron gives morally workable alternatives to these proposals."

"Ronald J. Sider's work is a breath of fresh air. Unlike many on the left, he takes our annual deficits and ever-growing debt seriously. Unlike some on the right, he is profoundly concerned about growing poverty and inequality. Combining insights from both sides, he thinks our debt amounts to an 'intergenerational injustice' but that balancing the budget 'on the backs of the poor' is 'also blatant injustice.'. . . Sider's thinking is generous throughout, perhaps his finest virtue in these trying times."

"In a political culture arguably gone awry, Sider's succinct merger of religion and economics is well worth reading. If nothing else, Sider argues credibly and with clarity that by adopting a moral vision, the country can find an economic path that is both stable and humane."

Acknowledgments
Abbreviations
Introduction
1. The Crisis Is Real
2. Crucial Economic Data: "Just the Facts Ma'am"
3. The Big Questions in the Debate
4. Current Proposals: Simply Not Good Enough
5. A Better Way
6. We Can Do It
Action Steps
Notes
Index 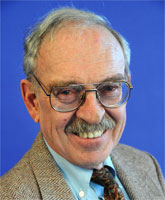 Theologian and social activist Ronald J. Sider is the founder of Evangelicals for Social Action, a think-tank that publishes Prism magazine and seeks to develop biblical solutions to social and economic problems. He is also professor of theology, holistic ministry, and public policy at Palmer Theological Seminary in Wynnewood, Pennsylvania, and is a founding board member of the National Religious Partnership for the Environment. Sider has published over 22 books and has written over 100 articles in both religious and secular magazines. He is the author of Rich Christians in an Age of Hunger and Just Generosity. He received a BA in European history from the University of Waterloo in Ontario and a Master of Divinity and PhD in history from Yale University.