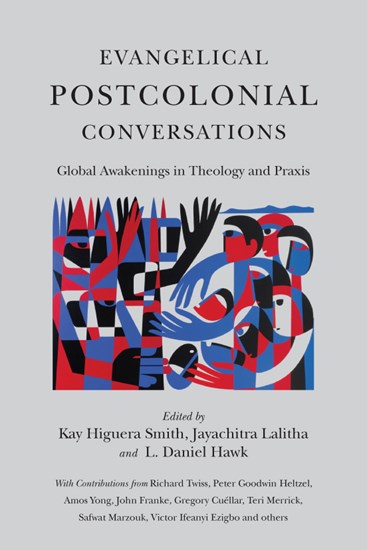 Global Awakenings in Theology and Praxis

Colonialism involves more than just territorial domination. It also creates cultural space that silences and disenfranchises those who do not hold power. This process of subjugation continues today in various forms of neocolonialism, such as globalization. Postcolonialism arose in the latter half of the twentieth century to challenge the problem of coloniality at the level of our language and our actions (praxis). Postcolonialism seeks to disrupt forms of domination and empower the marginalized to be agents of transformation.

In 2010, the Postcolonial Roundtable gathered at Gordon College to initiate a new conversation regarding the significance of postcolonial discourse for evangelicalism. The present volume is the fruit of that discussion. Addressing themes like nationalism, mission, Christology, catholicity and shalom, these groundbreaking essays explore new possibilities for evangelical thought, identity and practice.

The contributors demonstrate the resources for postcolonial criticism within the evangelical tradition, as well as the need to subject evangelical thought to an ever-new critique to prevent the formation of new centers of domination. Evangelical Postcolonial Conversations models the kind of open dialogue that the church needs in order to respond appropriately to the pressing concerns of the world today.

"The contributors to Evangelical Postcolonial Conversations remind us that there is no view from nowhere. More importantly, they help western evangelicals realize how often we have confused our finite and fallible human responses to God's self-disclosure with the Word of God itself—how often we have confined God's Word to our words. What I enjoyed most about this book is the way it invited me, the reader, into an ongoing conversation that itself models how self-identifying evangelicals can better listen to the voices of those in the Majority World and on the margins in a manner that engenders humility, repentance and even our ongoing conversion to something that more closely resembles God's reign on earth as it is in heaven."

"This pioneering book charts a new direction in evangelical theology. It employs postcolonial theory to examine the evangelical legacy and offers rich insights in the reconstruction of mission and theology. Forward-looking and provocative, the book will no doubt stimulate debates in the evangelical church and beyond."

"The various 'isms' usually start outside evangelicalism. They arrive in nonevangelical packaging and may provoke questioning and anxiety, but then they may get thought through within an evangelical framework and become fruitful within evangelical thinking and commitments in a way that can be instructive for the whole church. It can take time to navigate the sequence, even though evangelicalism is related to Protestantism, and postcolonialism (as one of the contributors notes) is a protest movement. This collection is the marvelous fruit of the work of those who have reflected deeply on postcolonialism. It's neat that so many of the chapters are cowritten. And whereas terms like empire can sound as if they apply chiefly to the empire against which the American colonies rebelled, it's encouraging for a Brit to be able to note how much attention is paid to the colonial nature of thinking and action within the Americas."

"This collection is a solid, sharp contribution to the juncture of Christian studies and postcolonial studies. I have noted with delight how in recent years evangelical theology has addressed the major crises and issues of our times. This has certainly been the case with regard to migration and economics. This venture into the discourse of imperial-colonial formations and relations is thus much needed and much welcomed. I look forward to dialogue and recommend the volume highly. A job well done!"

"Christianity today is facing tremendous challenges and opportunities tied to often-overlooked flows of power in our postcolonial world. What role does faith play as suffering persists and lives are lost? The contributors to this volume join a broader theological debate, making major contributions as they reclaim the robust witness of the evangelical heritage for the common good with creativity and courage."

"I feel like Rip Van Winkle, who went to sleep and woke up in a changed world. The ways of doing missions have undergone a paradigm shift, and these writers helped me understand it."

"This volume presents a groundbreaking endeavor toward evangelical postcolonial theology, articulating the intersection between evangelical and postcolonial discourse. It challenges the theological roundtable under the dominion of the Western metanarrative of Enlightenment that keeps the colonial project and its civilizing mission intact, undertaking a constructive task for evangelical-postcolonial relevance and praxis in the face of the empire driven by globalization. This is an important contribution toward postcolonial imagination, which deepens and reinterprets evangelical theological discourse and praxis."

"Evangelical Postcolonial Conversations prophetically challenges the evangelical community to examine critically how it is complicit, historically and presently, in the colonial enterprise, while also avoiding praxis-oriented suggestions for redressing oppression. This book is essential for introductory level courses at any seminary, CUME included, as it provide a wealth of knowledge for theologians and practitioners alike to re-examine their past as they progress in their vocation. . . . For practitioners and academics alike, Evangelical Postcolonial Conversations is highly recommended for moving past that illusory enchantment to work that is truly liberating."

"A helpful reader that gives voice to postcolonial thought at a time when evangelical leaders must engage increasingly pluralistic contexts."

"There is so much to commend here. If contemporary evangelical missiology is to forge a path that is both liberating and consistent with its aim of authentically bearing witness to God's good news, then conversations such as this are essential. If the exchanges in this volume are any indication, the future of the evangelical-postcolonial conversation is an extraordinarily hopeful one."

"This book adds to the much-needed conversation in today's post-colonial, post-Christian, post-modern, neo-capitalist, and urbanized world. All the 'posts' and hyphens destroy what modern Evangelicalism attempted to wrap up so neatly, particularly from its designated position of power. The contribution of this volume helps many to take seriously their perceptions and seek God's overall wisdom in collaboration with the complication of hybridity in our world."

A Response to the Postcolonial Roundtable: Promises, Problems and Prospects
Gene L. Green

The Postcolonial Challenge to Evangelicals
Editors

1. From Good: "The Only Good Indian Is a Dead Indian"; to Better: "Kill the Indian and Save the Man"; to Best: "Old Things Pass Away and All Things Become White!" An American Hermeneutic of Colonization
L. Daniel Hawk and Richard L. Twiss

5. Tracing the Metanarrative of Colonialism and Its Legacy
Teri R. Merrick

7. The Apocalypse of Colonialism: Notes Toward a Postcolonial Eschatology
Christian T. Collins Winn and Amos Yong

10. The Problem and Promise of Praxis in Postcolonial Criticism
Federico A. Roth and Gilberto Lozano

11. Embracing the Other: A Vision for Evangelical Identity
Kay Higuera Smith

Part 5 Closing the Circle
Introduction to Part 5: The Evolution of the Postcolonial Roundtable
Joseph F. Duggan

The Future of the Global Church