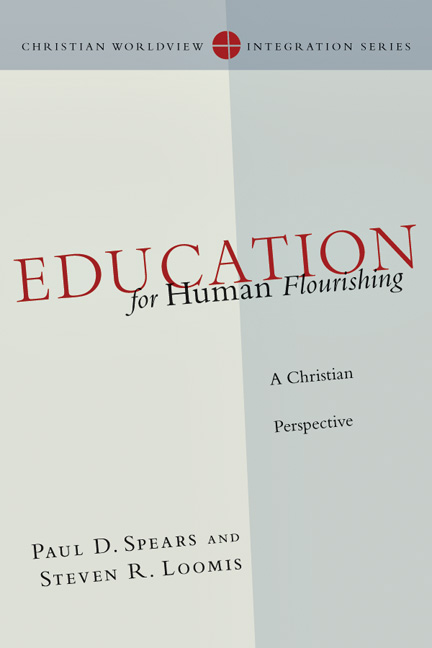 Education is arguably the foundation for human flourishing within any society. What do distinctively Christian educators have to contribute within the broad framework of public education found in pluralist societies of the West? How can Christian teachers make their voices heard within an increasingly hostile environment where technique and pragmatism are firmly entrenched and religious views are often suspect?

Far from offering a thin patina of "niceness" spread over standard educational philosophy, Steven Loomis and Paul Spears set forth a vigorous Christian philosophy of education that seeks to transform the practice of education. Beginning with a robust view of human nature, they build a case for a decidedly Christian view of education that still rightfully takes its place within the marketplace of public education.

After surveying the history of educational philosophy, they offer a stimulating analysis of the information economy and its implications for education. This is followed by a concrete proposal for the teaching of social ethics, and finally by a delineation of issues and questions for educational practice, policy and leadership.

A must-read for all who are concerned for human flourishing through education.

"Spears and Loomis take us on a careful and detailed journey through Western philosophic history and its forever-diminishing impact on the classical Judeo-Christian ideals of education. They trace the decline from the optimism of the Enlightenment, unable to engage metaphysical truth, to the narcissism of scientific naturalism, to the skepticism and confusion of today's postmodern chatter. Fortunately they do not leave us here but begin to reestablish the ideas around which we can rebuild an education for true human and cultural flourishing."

"Exposing the fray of secular-sacred categories and illustrating the perilous reef of the technical model of education, Spears and Loomis argue the case for human flourishing, rigor, creativity and freedom in the educational endeavor. Spears and Loomis challenge Christian educators to rethink educational philosophy and to prepare learners for virtuous action. A wake-up call for Christian higher education."

"Spears and Loomis have crafted an erudite, refreshingly honest and comprehensive critique of our education system, yet they passionately respond with a blueprint for change that is both hopeful and visionary. The authors' clarion call makes clear that believers need to expose the folly of contemporary education and the vapidity of a secular worldview while asserting the strength and integrity of the Christian faith. In the words of the famous mathematician Blaise Pascal, 'Truth is so obscure in these times and falsehood so established, that unless we love the truth, we cannot know it.'"

Series Preface
Authors' Preface
Précis of Book and Chapters
1 Humanity Revisited
2 Historical Perspectives on Education: Looking Back to the Future
3 Who Knows? Education and Epistemology
4 The Information Economy of Education
5 Social Ethics and the Institution of Education
6 Issues and Questions for Educational Practice, Policy and Leadership
Indexes

Ecologies of Faith in a Digital Age

Paul Spears (Ph.D., Claremont) is a philosopher of education within the Torrey Honors Institute at Biola University. He teaches the liberal arts Socratically with a classical curriculum, lectures nationwide on educational philosophy and has been a contributing author to Foundations of Christian School Education.