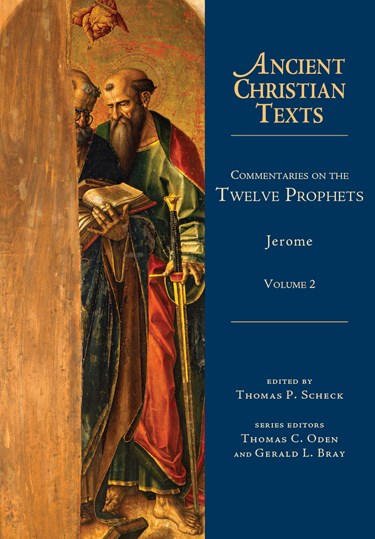 Jerome (c. 347-419/20), one of the West's four doctors of the church, was recognized early on as one of the church's foremost translators, commentators, and advocates of Christian asceticism. Skilled in Hebrew and Greek in addition to his native Latin, he was thoroughly familiar with Jewish traditions and brought this expertise to bear on his understanding of the Old Testament. Beginning in 379, Jerome used his considerable linguistic skills to translate Origen's commentaries and, eventually, to translate and comment on Scripture himself.

Jerome began writing commentaries on the twelve minor prophets in 392 while preparing his Latin Vulgate translation of the Bible. After completing Nahum, Micah, Zephaniah, Haggai, and Habakkuk, he was interrupted in 393 by the Origenist controversy, after which he became a vocal critic of Origen of Alexandria. He finished his commentaries on Jonah and Obadiah in 396. These seven commentaries are available in the ACT volume Commentaries on the Twelve Prophets, Volume 1.

The Origenist controversy and his commentary on Matthew occupied Jerome's time for the next several years. He finally completed his commentaries on the rest of the twelve prophets in 406. This volume, edited by Thomas Scheck, includes those final five commentaries on Zechariah, Malachi, Hosea, Joel, and Amos.

Throughout these commentaries, Jerome refers frequently to the work of previous commentators, and his spiritual exegesis relies heavily on the exegetical work of Origen - though he acknowledges that "I have not followed them in everything." Jerome hears in these texts God's judgment and mercy not only on Israel but especially on the Christian community. In Amos, for example, he says that "whatever we have said about Judah refers to the church." He wrestles especially with the scandalous message of Hosea, which he refers to as drowning with Pharaoh during the crossing of the Red Sea. But he trusts that "the ways of the Lord are the reading of the Old and New Testament, the understanding of the holy Scriptures."

By sharing the wisdom he received from these biblical texts, Jerome's magisterial commentaries help us walk more faithfully in God's ways.

Ancient Christian Texts are new English translations of full-length commentaries or sermon series from ancient Christian authors that allow you to study key writings of the early church fathers in a fresh way.

Thomas P. Scheck (PhD, University of Iowa) is associate professor of theology at Ave Maria University in Ave Maria, Florida. He is the author of Origen and the History of Justification and Erasmus's Life of Origen. He is also the editor of two volumes of Jerome's Commentaries on the Twelve Prophets and the translator for Origen's Homilies on Numbers in IVP's Ancient Christian Texts series as well as the translator of Origen: Commentary on the Epistle to the Romans and St. Jerome: Commentary on Matthew in the Fathers of the Church series and Jerome's Commentaries on Isaiah and Ezekiel in the Ancient Christian Writers series.