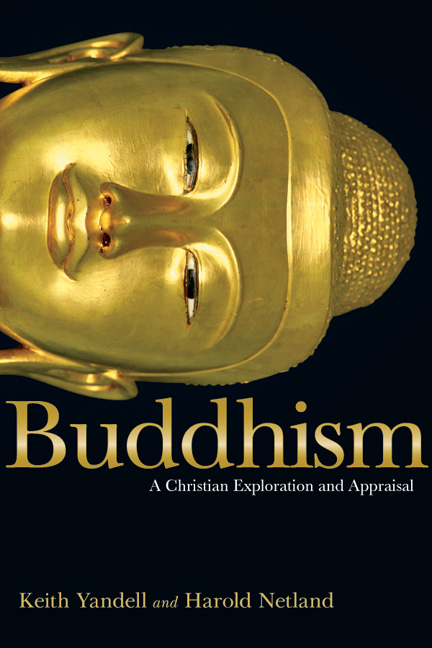 A Christian Exploration and Appraisal

by Keith Yandell and Harold Netland

The disproportionate influence of Buddhist thought and philosophy found in cultural circles such as education, entertainment and the media coupled with the dramatic recent surge of asian immigrants, many of whom are Buddhist, has brought Buddhism to the forefront of Western culture. And more and more of those who have become disenfranchised from Christian spirituality are embracing Buddhism as a replacement way of organizing their life.

In this clear and balanced introduction, Keith Yandell and Harold Netland set out to educate Christians about Buddhism, laying out the central metaphysical claims of this significant world religion, including a concluding chapter which offers an honest comparison with Christianity.

The authors acknowledge some overlap of belief while also noting the clear and significant differences between the two religions. As both religions affirm, these distinctions have enormous consequences for the spiritual well-being of adherents. This book guides any reader who wants to understand the central tenets and claims of Buddhism more deeply and how learn how it compares to Christian faith.

"Yandell and Netland present an extraordinarily lucid and accessible account of Buddhist thought that simultaneously recognizes and preserves its nuanced complexity. The first half recounts the development of Buddhism from its birth in northern India to its modern-day embracement by those in the West seeking an alternative spirituality. In the second part they carefully and critically examine the cogency of central Buddhist doctrines, particularly the view of the persons that underlies the Buddhist doctrines of suffering, karma and rebirth, and liberation to nirvana. Those who adopt the current mantra that all religions are ultimately alike, that Buddhism and Christianity do not differ, that the Buddha and Jesus were historically interchangeable, will be seriously challenged by the way the authors meticulously deconstruct the pluralist view."

"While in recent years evangelicals have finally engaged the question of the theology of religions, there are very few evangelicals equipped to do what Professor Netland, himself a leading theologian of religions, and Professor Yandell, a distinguished philosopher, have produced, namely, an informed and incisive engagement of a particular religion from an evangelical perspective. This book not only contains valuable lessons both from Buddhism as a religion and the Buddhist-Christian encounter but also serves as a paradigm for later works: a careful mapping out of key ideas of a living faith and a sympathetic yet unapologetic critique from a Christian perspective. For sure, I will include this book as a text in my courses in world religions."

"Yandell and Netland's Buddhism: A Christian Exploration and Appraisal provides a clear, concise and accurate introduction to Buddhist history and doctrine. Although written for Christians, it is not a work of apologetics so much as one concerned to instruct Christians about what Buddhism is, and to clarify differences between the two religions. It does those things very well indeed, and I hope that it will rapidly become the point of first reference for Christians who want to understand Buddhism."

"Yandell and Netland have produced a brilliant, clear, engaging introduction to Buddhism that is both sympathetic and critical, highlighting points of convergence with and divergence from Christianity. Their book would be excellent in university courses in philosophy of religion or religious studies, but it would also reward general readers interested in finding both a reliable philosophical guide to Buddhism as well an exploration of Buddhist teaching in relation to Christian faith."

"Keith Yandell and Harold Netland accomplish several important things in this concise work: (1) they authoritatively summarize Buddhist history; (2) they systematically outline Buddhist teachings; and (3) they clearly compare and contrast Buddhism with Christianity. A unique resource for Christians interested in Buddhism and Buddhist-Christian relationships."

"At last we have a book that moves beyond the inaccurate, rather imprecise and sentimental level of so many books about Buddhism and the Christian-Buddhist encounter, and focuses on a serious consideration of Buddhist truth claims. The opening chapters give an acceptable first survey of Buddhism, and include material on dimensions of Buddhism, such as the personalist school and the historical context for the introduction of some rather idiosyncratic forms of Japanese Zen into the West, that are often neglected in popular introductions. It gives enough detail on Buddhist doctrines for one new to the subject to understand what the issues are and engage in a critical yet respectful manner with them. At many points this clearly written and readable book corrects, from the point of view of Buddhism as it has existed in history and in its Asian context, common Western misperceptions of Buddhism. But the really exciting section of this book is the philosophical analysis of key Buddhist doctrines such as not-self and momentariness. Netland and Yandell take Buddhist truth claims seriously, as Buddhists ask us to do, and in their analysis of those claims they make a truly original contribution, pitched at an accessible yet refined level of philosophical sophistication and knowledge of Buddhist doctrines and debates. The book throws down a challenge to Buddhists to clarify what they mean when they make their claims, and to enter into debate in defense of their truth. This philosophical analysis is followed by an outline of some absolutely fundamental differences between Christianity and Buddhism, and Christ and the Buddha. Here we see the basis of a critical Christian theological engagement with Buddhism as a religion. The book challenges Christians to move beyond polite small talk or minimalizing of essential differences that demand choice and commitment, and engage with Buddhists in debating their mutually incompatible claims to (as the Buddhists put it) 'see things the way they really are' regarding God, Jesus Christ, personhood, and our meaning, purpose and destiny. This book shows us (to use another Buddhist expression) 'analytical meditation' at its finest. It is an exciting book that I shall certainly use and recommend to my students. For those Christians and Buddhists who take truth seriously, and understand the significance of reasoning in making crucial choices, Netland and Yandell's book will contribute significantly to setting the agenda for serious dialogue between Christianity and Buddhism for some time to come."

Paul Williams, professor of Indian and Tibetan philosophy and codirector of the Centre for Buddhist Studies, University of Bristol, U.K.

"This is a book which we have been waiting a long time to see. It is a well written, constructive and thorough treatment of Buddhism which demonstrates Netland's and Yandell's extensive experience with both the teachings of Buddhism, as well as the popular, lived faith of Buddhists. It provides an excellent survey of the spread of Buddhism in the ancient East as well as in the contemporary West, always keeping in mind the philosophical nuances of Buddhism as well as the popular, folk practices of Buddhists in their global and ethnic diversity. In a day when the search for common ground has often eclipsed the real and striking differences between the living faith of Buddhists and Christians, this book clearly sets forth the distinctiveness of the Christian faith vis-a-vis Buddhism, but does it in a refreshingly irenic way. The authors highlight common ground where it exists, but they are equally clear about the differences in each faith's understanding of the religious ultimate, the human predicament and the ways to overcome this. This volume regularly inspires and informs the reader. It is a must-read for all people who are seriously interested in the Buddhist-Christian encounter. I highly recommend it!"

"This is interfaith dialogue at its best. Netland and Yandell provide a thoughtful understanding of Buddhism, followed by a careful pressing of internal problems within Buddhism, followed by a constructive summary of real differences between Christianity and Buddhism. They also succeed in establishing the plausibility of Christianity in the light of various possible Buddhist critiques. No reader, Christian or Buddhist, will be left unchallenged by this lucid exposition, critique and proclamation."

This is an exceptional book for at least two reasons. First, it succeeds in summarizing the entire sweep of Buddhism's historical development. Second, the authors manage to give readers an accurate summary of basic Buddhist teachings. An honest book all the way around. Highly recommended.

A long overdue book for students and teachers of world religions, helpful especially for Christians who engage in serious inter-religious dialogue with Buddhists.

Can Evangelicals Learn from World Religions?

Keith Yandell is Julius R. Weinberg Professor at the University of Wisconsin--Madison, teaching philosophy of religion and history of modern philosophy. He is the author of The Epistemology of Religious Experience (Cambridge, 1994), Philosophy of Religion (Routledge, 1999) and The Soul (Ashgate, forthcoming).

Netland is professor of philosophy of religion and intercultural studies at Trinity Evangelical Divinity School in Deerfield, Illinois. He has spent much of his professional life in Japan. His other books include Dissonant Voices: Religious Pluralism and the Question of Truth.