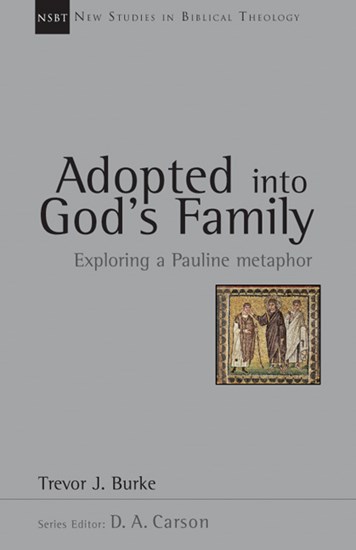 The relationship between God and his people is understood in various ways by the biblical writers, and it is arguably the apostle Paul who uses the richest vocabulary.

Unique to Paul's writings is the term huiothesia, the process or act of being "adopted as son(s)." It occurs five times in three of his letters, where it functions as a key theological metaphor.

In this New Studies in Biblical Theology volume, Trevor Burke argues that huiothesia has been misunderstood, misrepresented or neglected through scholarly preoccupation with its cultural background. He redresses the balance in this comprehensive study, which discusses metaphor theory; explores the background to huiothesia; considers the roles of the Father, Son and Holy Spirit; examines the moral implications of adoption, and its relationship with honor; and concludes with the consequences for Christian believers as they live in the tension between the "now" and the "not yet" of their adoption into God's new family.

"Not only the importance of God's family, but also the enormous privilege of belonging to it, are powerfully underscored by Paul's understanding of what it means to be the adopted sons of God. With such themes in view, a wide array of pastoral implications soon springs to light. In other words, this volume not only probes a neglected theme--it also edifies."

Without question, Burke has provided a valuable contribution to a fuller understanding of this vital Pauline metaphor. He has also raised the contribution of the adoption metaphor such that it noe necessarily must be included in the larger metaphorical framework of soteriology.

Burke?s new book is a fine addition to the series by assembling and interpreting a great amount of data regarding the adoption of believers.

"Burke offers a clear, precise and coherent study of what emerges as a major Pauline metaphor that has long been overlooked. . . . I believe this to be a very valuable addition to Pauline studies, one that I recommend to students and scholars alike."

Series Preface
Author's Preface
Abbreviations
1. Adoption: A Misinterpreted Metaphor?
2. Adoption: Another Soteriological Metaphor for Paul
3. The Origin and Background of Paul's Adoption Metaphor
4. "Abba, Father" and His Family of Adopted Sons
5. God the Son and the Adopted Sons of God
6. Adoption and the Spirit
7. Adoption and Honor
8. Adoption and Living Between the "Now" and "Not Yet"
Summary
Appendix: Some Alleged Cases of Adoption in the Old Testament
Bibliography
Index of Authors
Index of Scripture References
Index of Extrabiblical and Classical References

Trevor J. Burke (Ph.D., Glasgow) is professor of Bible at Moody Bible Institute, Chicago. He was previously lecturer in New Testament and head of the department of biblical studies at Pacific Theological College, Suva, Fiji. He is the author of Family Matters and Adopted into God's Family and coeditor of Paul and the Corinthians.