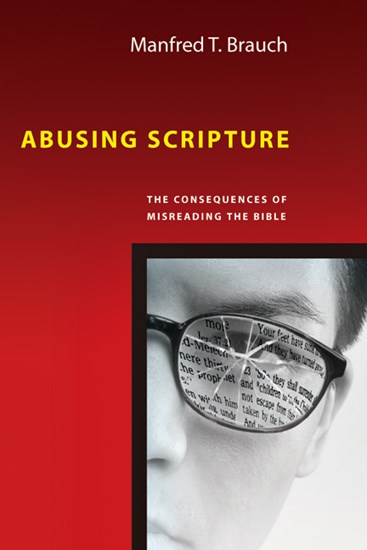 The Consequences of Misreading the Bible

Virtually all Christians recognize the centrality of the Bible to their faith. Yet many Christians misquote and misapply Scripture regularly. Often those who are most passionate about the authority of the Bible are at the greatest loss when it comes to understanding its message clearly and applying it faithfully. Professor Manfred Brauch believes this kind of mistaken interpretation and application of Scripture is a detriment to the integrity of our Christian witness and contributes to profound misunderstandings in Christian belief and practice.

In this practical book written with the non-specialist in mind, Manfred Brauch identifies and corrects a number of basic errors that interpret and apply biblical texts in ways that distort their meaning and message. Chapters explore issues of context, genre, consistency, author intent and other important considerations, addressing not just the act of interpretation, but also the attitudes behind the ways we choose to apply Scripture.

Whether you lead a Bible study or small group, are a pastor or Sunday school teacher, are engaged in biblical study at a college or seminary, or are just an everyday Christian who wants to understand how to interpret God's Word well and recognize good interpretation (or the lack therof) when you encounter it, this important book will be an invaluable guide.

"Manfred Brauch defends the Bible the way one defends a lion: by simply letting it out of its cage. Once out, it can take care of itself quite well, thank you. But there are those who would cage the Bible with obscurantist, selective and bowdlerized readings. And worse, they are the Bible's friends, not its avowed enemies. Like dysfunctional families, they abuse the one they think they love. Brauch loves the Bible, and he uses his considerable skill as a scholar to invite us once more to really hear the Lion roar."

Ben Patterson, campus pastor, Westmont College, and author of He Has Made Me Glad and Waiting

"Abusing Scripture calls into question both the easy assumption of the Reformed emphasis on the perspicuity of Scripture and the presumption that those who declare the Bible to be the infallible or even inerrant Word of God will agree about what it teaches and illustrates. What it proves instead is that 'rightly dividing the word of truth' is a difficult and contentious matter--a matter demanding close attention to historical, literary and theological context; intention; and even the nature of language itself. Still the stakes are worth the effort. Too much rides on getting right the original meaning and present application. Professor Manfred Brauch not only helps Bible readers to identify the troubling issues but also provides a way of dealing with them."

A useful edition to a church or an academic library.

I strongly recommend Dr. Brauch's book for those with the terrifying task of daring to try to teach God's truth to others.

Abusing Scripture offers a sixfold taxonomy of ways evangelicals are guilty of "doing violence to" Scripture. Throughout his discussion of this taxonomy, Brauch returns to three illustrations of these kinds of abuses in practice. Brauch avoids low-hanging fruit with his choice of examples. Instead, he focuses on attitudes and practices that are deeply entrenched in the evangelical community: its relfexive patriotism and knee-jerk support for America's wars, its still-too-common defense of patriarchy, and its privelging of evangelism over social concern.

Preface
Acknowledgments
Introduction
1.The Nature of Scripture
2.The Abuse of the Whole Gospel
3.The Abuse of Selectivity
4.The Abuse of Biblical Balance
5.The Abuse of Words
6.The Abuse of Context: Literary and Theological
7.The Abuse of Context: Historical Situation and Cultural Reality
8. Concluding Reflections and Challenges
Appendix A: The Gospel of Personal Salvation and the Social Gospel
Appendix B: Views of Women in Intertestimental Judaism and Early Christianity
Appendix C: Just-War Theory
Appendix D: Letter to President Bush from Evangelical Leaders
Appendix E: Expanded Translation/Interpretation of Ephesians 5:21-33
Bibliography
Scripture Index

Manfred T. Brauch (PhD, McMaster University) is retired professor of biblical theology and past president of Palmer Theological Seminary of Eastern University in Philadelphia, Pennsylvania. He is the author of Set Free to Be: A Study in Romans, and Hard Sayings of Paul, and he is a contributor to Hard Sayings of the Bible. Since 2004, Brauch and his wife have done long-term volunteer work in medical missions and theological education in Chile, Russia, and Cameroon, West Africa.