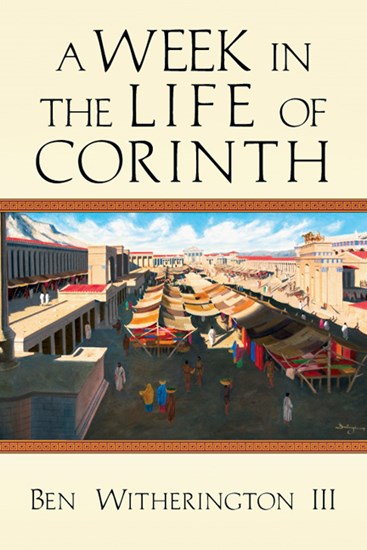 Ben Witherington III attempts to reenchant our reading of Paul in this creative reconstruction of ancient Corinth. Following a fictitious Corinthian man named Nicanor through an eventful week of business dealings and conflict, you will encounter life at various levels of Roman society--eventually meeting Paul himself and gaining entrance into the Christian community there. The result is an unforgettable introduction to life in a major center of the New Testament world. Numerous full-page text boxes expand on a variety of aspects of life and culture as we encounter them in the narrative.

"Like the valley of dry bones being covered once more with sinews and flesh, Corinth rises from its overgrown ruins to its former vibrancy, color and intrigue, allowed to re-live one week of its history. Witherington masterfully mingles the pleasant and the useful as he introduces readers to the social institutions, household customs and civic life of the Roman colony of Corinth by telling a delightful story centering on the attempts of one Erastus to win a public office and one Paul to prepare for his trial before the Roman proconsul, Gallio. I know of no other introduction to the Greco-Roman environment of Paul's mission that could also qualify as entertaining 'beach reading.'"

"This very readable—indeed, gripping—book gives us an imaginative insight into the Greco-Roman world of Paul's mission to Corinth. The details of everyday life for Paul and those he met are set in their historical context by an expert scholar who knows the New Testament and its background very well. I recommend it to all who want to understand the setting in which early Christianity grew and flourished."

"If you want to know what it would have been like to live in ancient Corinth, spend a week in the life of a freedman, traverse the olive groves and cobblestone streets, survive the cutthroat politics of a Greek city, encounter pagan priestesses and converse with a Jewish tentmaker named 'Paulos,' then Ben Witherington has written the book for you. This short novella, with pictures and explanations of customs in ancient Corinth, provides a window into the world of Paul's Corinthian letters. Witherington creatively brings the setting of Paul's Corinthian ministry to life with historical rigor and narrative artistry. Witherington brings to us the sights, smells, sounds and culture of Corinth as the apostle Paul knew it."

"This book provides a uniquely enjoyable way to learn about ancient culture and Paul's mission in Corinth by immersion. Although I found the story delightful and intriguing, I could also see behind it careful research on a large array of details."

"This imaginative narrative brings the New Testament world to life by following the freedman Nicanor around ancient Corinth, relating his encounters with religion, gladiators, politics, domestic life and the nascent Christian movement (including several biblical characters). Though it may not solve all the riddles of the Corinthian correspondence, here is an engaging and informative introduction to Corinth and the wider cultural context of the first-century Roman Empire."

"This is historical fiction at its best."

"Ben Witherington III, a good creative writer and accomplished NT scholar, has given us a treat in his short novel A Week in the Life of Corinth. Rather than providing a list of facts about life and culture in NT times, Witherington has composed an interesting story in which we can see and learn this information along the way. This will be a fun way to enhance our understanding of the world in which the NT takes place—and it would be helpful for preachers to read some good fiction along the way!"

"The book would be an ideal introduction to a course on 1 Corinthians, or to a course on Paul and his mission. It is easy to read, but very well informed by Witherington's scholarship."

David Wenham, Journal for the Study of the New Testament, 35(5)

"As I have been teaching on 1 Corinthians, I found this work very beneficial. Not only is the storyline intriguing, but this book also presents itself as a pedagogical tool. Here students can 'feel' what life must have been like in first century Graeco-Roman society—a culture foreign to many of us today. Witherington's book brings biblical times alive and is thus a wonderful gift to the church. It brings us closer to our spiritual ancestors and their experience of the risen Lord in a society hostile to the gospel."

"[T]his is an appealing view of the social world of Paul and Corinth. I have no doubt that it will arouse the interest and capture the imagination of readers."

"Whether you're well acquainted with Paul's letters to the Corinthian church or are encountering them for the first time, this book will bring the biblical text to life."

"I highly recommend this fresh approach to familiar territory: it will illuminate as well as entertain!"

1. Poseidon's Revenge
2. Isthmia and Its Games
3. Paulos, Priscilla and Aquila
4. The Home of Erastos
5. The Enmity of the Enemy
6. Gallio's Gall
7. Erastos Goes Missing
8. The Proposition
9. The Trial of Paulos
10. Julia's Prayers and Nicanor's Protection
11. The Subura and the Sabbath
12. Paulos, Priscilla and Erastos
13. Dies Solis: The Morning of the Day of the Sun/Son
14. The Afternoon of the Day of the Sun
15. The End of the Day
Post Scriptum
Image Credits and Permissions