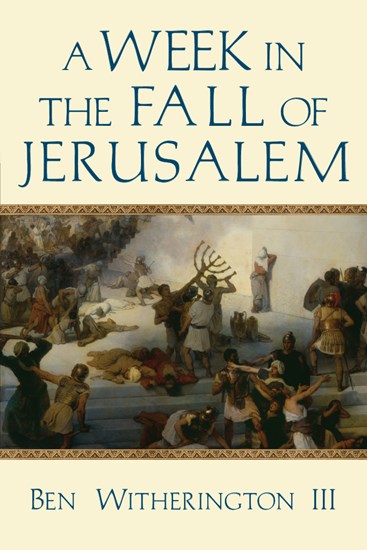 It's AD 70. And amidst smoke, clamor, and terror, Jerusalem is falling to the Romans, its temple being destroyed. As Jews and Christians try to escape the city, we travel with some of them through an imagined week of flight and faith. A scribe makes his way into Galilee in search of records of Jesus' life and teachings. A company of women, responding to a prophecy, travels the route to a new life in Pella. We see friends reunited, join a worship gathering of Jesus followers, and discover treasured manuscripts.

In this imaginative and entertaining narrative, New Testament scholar Ben Witherington leads us behind the veil of centuries to see and experience the historical and social realities of this epochal event. Allowing the light of what we do know to conjure possible events, A Week in the Fall of Jerusalem is a fun and informative journey into the wrinkles and folds of a lost story.

"With skill and drama, Ben Witherington takes us through what the fall of Jerusalem in AD 70 might have been like—fascinating, to say the least, and instructive as well."

"Three very important things happened in the first century AD: Jesus died on a Roman cross, Jesus was resurrected, and the city and temple of Jerusalem were captured and destroyed by the Romans. These three events, which took place within one generation, changed the world. The first two events have been discussed endlessly and have been dramatized in literature, theater, and cinema. But the third event, the fall of Jerusalem, has received very little attention. This is why I welcome Ben Witherington's imaginative but historically and culturally well-informed drama of what a week in the fall of Jerusalem might have been like. It's a fun read but also very informative and instructive."

"Ben Witherington's A Week in the Fall of Jerusalem invites readers to imagine what life would have been like for Jewish believers in Yeshua in the turbulent days of the First Jewish Revolt, a gripping story with which many are unfamiliar. While telling a good story and weaving it around familiar characters of the New Testament, Witherington also informs readers about many historical and cultural elements of the Jewish and Roman worlds of the late first century. Witherington's narrative of historical fiction engages the reader's imagination, bringing them into an experience of the life of early Jewish Yeshua-followers in the wake of the trauma of AD 70."

1. Where There’s Smoke
2. Miryam of Pella
3. The Daughters of Jerusalem
4. Sorrow and Woe
5. A Tale of Lentils and Lentels
6. Levi’s Flight
7. Respite in Jericho
8. Prophecy and Interpretation
9. Visitors in Worship
10. The Parting of the Ways
11. Julius Reports Back
12. The Travels and Travails of Torah
13. The End of Levi
14. Uncertain Paths
15. The House of the Fisherman
16. Another Journey Begins
17. Of Spices and Snakes
18. The Secrets of Bethsaida
19. The Remains of the Week
20. Prayers and Providence
21. Old Scrolls and New Scrolls
22. Family Reunion
Image Credits