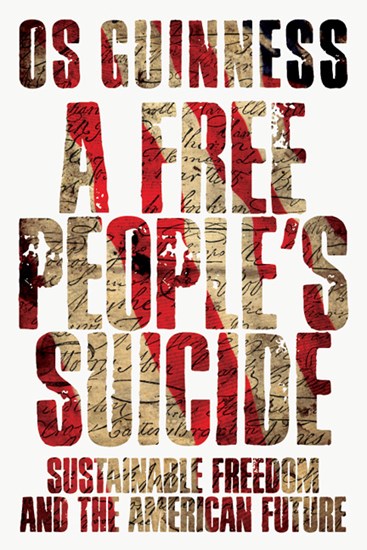 Sustainable Freedom and the American Future

A Logos Book of the Year

"If destruction be our lot, we must ourselves be its author and finisher. As a nation of freemen, we must live through all time, or die by suicide."

Nothing is more daring in the American experiment than the founders' belief that the American republic could remain free forever. But how was this to be done, and are Americans doing it today?

It is not enough for freedom to be won. It must also be sustained. Cultural observer Os Guinness argues that the American experiment in freedom is at risk. Summoning historical evidence on how democracies evolve, Guinness shows that contemporary views of freedom--most typically, a negative freedom from constraint-- are unsustainable because they undermine the conditions necessary for freedom to thrive. He calls us to reconsider the audacity of sustainable freedom and what it would take to restore it.

"In the end," Guinness writes, "the ultimate threat to the American republic will be Americans. The problem is not wolves at the door but termites in the floor." The future of the republic depends on whether Americans will rise to the challenge of living up to America's unfulfilled potential for freedom, both for itself and for the world.

"Os Guinness enlightens, cheers, chastises and informs with this latest contribution to our civic discourse. Guinness here solidifies his reputation as one of the most nimble voices from the Christian community as he surveys our history and our present with appreciation as well as deep concern. Highly recommended for all interested citizens, whatever their political or faith commitments."

Jean Bethke Elshtain, Laura Spelman Rockefeller Professor of Social and Political Ethics at the University of Chicago, author of Sovereignty: God, State and Self

"A Free People's Suicide is an inside view from the outside. Os Guinness has a clear eye, a quick mind, a profound grasp of political philosophy and an eloquent pen. His analysis of American freedom, what it has been, now is and is likely to become, is a clarion call for renewal of the founders' vision for a free people."

James W. Sire, author of The Universe Next Door and Václav Havel: The Intellectual Conscience of International Politics

"Sometimes a book is so important and so timely that not to have read it is to embarrass oneself. This is such a book. Its message is so crucial and so clear that all Americans are obligated to read it and have a national conversation on its themes. No cultural commentator or politician who has not read this book should ever be taken seriously again. Let this book be the new litmus test. If you are serious about America, be familiar with its themes and expect to discuss them and to be tested on them. Rest assured that you will be, because America is now herself being tested on them. Alas, we will not be graded on a curve. This book's clarion call is both piercing and full of hope. May God help us to hear it and to take action."

"With passion and urgency Os Guinness gives a sweeping historical account of America's past and her prospects for the future. He urges us to pay serious attention to a deeper understanding of freedom and makes a compelling case for why freedom requires virtue. Weaving together a wide-ranging knowledge of classical, constitutional and contemporary history, Guinness warns of America's decline but charts a course for America's renewal. It is a straight-shooting and sober volume, yet in the end it is a hopeful book."

"In a passionate work that blends historical-cultural analysis with moral exhortation, Os Guinness finds at the heart of America's culture wars something different than what many observers have seen. He identifies a 'freedom war,' a struggle over the very concept of freedom itself. As the Founders well understood, it is not enough for Americans to invoke endlessly the name of 'freedom' when they no longer agree as to what it means or what ends freedom is meant to serve. Guinness warns that freedom cannot long endure unless it is consecrated to purposes beyond itself. It is a warning worth heeding."

Wilfred M. McClay, SunTrust Chair of Excellence in Humanities, University of Tennessee at Chattanooga, and author of The Masterless: Self and Society in Modern America

"A Free People's Suicide challenges each and every citizen concerned about America's diminishing role as a beacon of liberty not only to comprehend the urgency, but also to participate comprehensively in freedom's preservation."

"Dr. Guinness' book is rich in its explorations of Lincoln's words and their import for us today. As an expatriate friend of America, Guinness, like de Tocqueville, has a rare gift for helping us see our better selves. He casts a discerning eye at our modern institutions, and habits of the heart—as reflected in the broader culture. He freely concedes that there are worrying signs on the horizon, but then, having thoughtfully set out the challenges we face in our historical moment, he brings us back to the best things the founders gave us. On the whole, it's a fascinating perspective from a British citizen."

1. What Kind of People Do You Think You Are?
2. Always Free, Free Always
3. Using History to Defy History
4. The Golden Triangle of Freedom
5. The Completest Revolution of All
6. An Empire Worthy of Free People
7. The Eagle and the Sun
Grateful Acknowledgments
Notes
Name Index
Subject Index