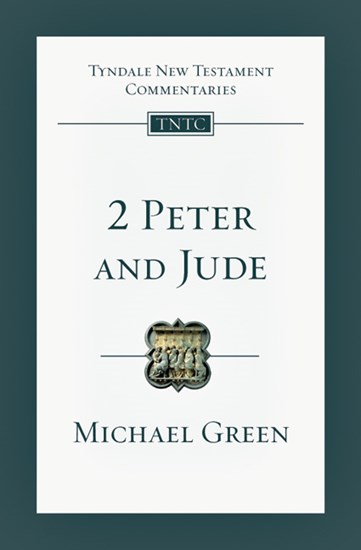 "The epistle of 2 Peter has had a very rough passage down the centuries," says Michael Green in this commentary. "Its entry into the Canon was precarious in the extreme . . . It was deemed second-class Scripture by Luther, rejected Erasmus, and regarded with hesitancy by Calvin."

And about Jude he says, "WE can learn a great deal about a man by listening to what he has to say about himself. Jude makes two significant claims . . . He is a servant of Jesus Christ . . . He is a brother of James" (Jesus' brother).

Explore these ideas and much more by reading Green's excellent commentary.

The original, unrevised text of this volume has been completely retypeset and printed in a larger, more attractive format with the new cover design for the series.

The Tyndale New Testament Commentaries have long been a trusted resource for Bible study. Written by some of the world's most distinguished evangelical scholars, these twenty volumes offer clear, reliable, and relevant explanations of every book in the New Testament.

These Tyndale volumes are designed to help readers understand what the Bible actually says and what it means. The introduction to each volume gives a concise but thorough description of the authorship, date, and historical background of the biblical book under consideration. The commentary itself examines the text section by section, drawing out its main themes. It also comments on individual verses and deals with problems of interpretation. The aim throughout is to get at the true meaning of the Bible and to make its message plain to readers today.

"The evenness and quality of this series are remarkable."

"A fine contribution to the series . . . The pastoral reflections woven throughout the book . . . are refreshing and demonstrate how the ancient text is still relevant for Christians living in the twenty-first century."

Kelly Iverson, Journal for the Study of the New Testament, September 2010
More

Join the TNTC Program and Save Over 30%!

The Message of 2 Peter & Jude

The Message of 2 Peter & Jude

E. Michael Green served as senior research fellow at Wycliffe Hall, Oxford University. He helped establish the Oxford Centre for Christian Apologetics and was adviser in evangelism to the archbishops of Canterbury and York. As a pastor, evangelist, author and lecturer, he taught and preached the New Testament for many years. His dozens of books include I Believe in the Holy Spirit and Evangelism in the Early Church.